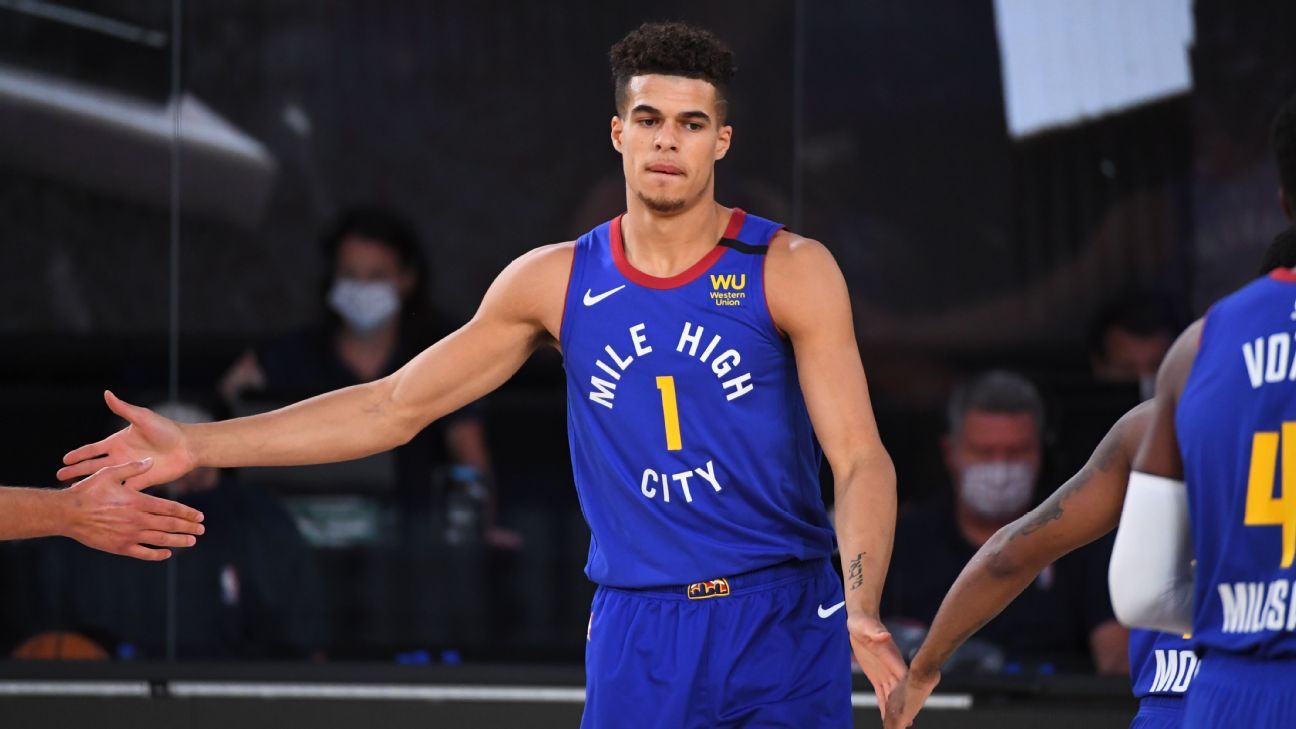 The first eight days of NBA seeding games have given us a lot of highlights — and not from the stars alone.

We asked our writers to identify the up-and-coming players who have caught their eye over the first week-plus.

Some of these players have been mainstays already this season, and others are making the most of a unique opportunity in Orlando, Florida.

Either way, you love to see it.

Here are nine players who have become difference-makers on the NBA campus.

Porter is finally healthy and showing the form that made him, as he entered college at Missouri, a candidate to become a top overall pick in the NBA draft.

He has earned a starting job for the injury-depleted Nuggets and has already become perhaps the primary scoring option, averaging 26.3 points per game in the seeding games. He has improved his 3-point shot into a legitimate weapon, but still has the mobility to attack off the dribble and the length to finish strong in the paint.

This week Porter broke the Nuggets’ rookie record for points in a two-game span, became the only rookie in NBA history to record a game with 30 points, 15 rebounds and five 3-pointers, and has shown the upside to join Nikola Jokic as franchise cornerstones. — Andre Snellings

In limited minutes as a rookie in 2018-19, Trent struggled to find his footing with the Blazers. But with consistent play in 2019-20, he’s become more efficient and his game has taken another step forward in the bubble.

In four games, Trent is averaging 20.3 points on 59% shooting, including 63% from deep, and he’s a team-best +54. For the first time in his career, he has hit at least four 3-pointers in four consecutive games.

At 6-5, he’s also a comfortable fit next to Damian Lillard and CJ McCollum on the floor. That three-man lineup has a net rating of +19.3 in 74 minutes in Orlando. — Andrew Lopez

At 27, House might be a bit old to be a breakout player, but this has been his first full NBA season after earning his way via the G League and a two-way deal.

After starting House most of the season, coach Mike D’Antoni planned to bring him off the bench in Orlando, but that changed when Eric Gordon went down with a sprained ankle. House has responded by averaging 16.8 points and shooting 41% on 39 3-point attempts in the first four bubble outings.

House’s shooting splits are much better as a starter than a reserve, so it will be interesting to see if D’Antoni sticks to his original plan or rides the hot hand when Gordon is ready to return. — Tim MacMahon

As San Antonio has turned over the team to its young guards inside the bubble, White’s evolution has been a highlight.

What’s especially eye-opening is that White is getting 8.3 3-point attempts and 6.8 free throw attempts per game. Over the course of the season, only five players have averaged that many attempts in both categories: James Harden, Bradley Beal, Trae Young, Luka Doncic and Lillard. Not bad company to be in, to say the least. — Tim Bontemps

The Spurs have to feel great about Johnson, a rookie averaging 13 points and five rebounds in 25 minutes per game since the restart while shooting 60% from 2 and 6-for-9 from distance.

Johnson starred at Kentucky alongside Tyler Herro and PJ Washington but slipped to the Spurs at No. 29 on draft night. His energy, competitiveness, physicality and progression as a shooter and passer have allowed him to crack the Spurs’ rotation.

San Antonio appears to have a gem in the 6-5, 220-pound wing who has the ingredients to develop into a longtime rotation player who plays a winning style. — Mike Schmitz

Though the Wizards sit at 0-4 in the bubble, Brown has been one of the most impressive second-year players to take the floor.

The 6-7 do-it-all wing has stuffed the stat sheet by averaging 16 points, 6.5 rebounds and 5.3 assists while adding value defensively thanks to his size, length and motor. Brown, who is shooting only 3-for-13 from distance, is still fine-tuning his deep ball, but does just about everything else on the floor for this young Wizards group.

What stands out most is Brown’s playmaking ability, which comes as little surprise given his background as a big point guard. His vision has been on full display in Orlando, as Brown has dissected defenses in the open court and pick-and-roll with his ballhandling and passing. The former 15th pick should evolve into an integral part of the Wizards’ young core. — Schmitz

With the Wizards’ two leading scorers (Bradley Beal and Davis Bertans) sitting out, Bryant has proved capable of shouldering a larger load.

Bryant hadn’t attempted more than 16 shots in a game this season before surpassing that twice in four games, including the second 30-point effort of his career. He’s still making 58% of his 2-point attempts — down slightly from his 64% mark during the regular season — and is 8-of-18 beyond the arc.

Grayson Allen, most known as the Duke star whom opposing fans loved to hate, has found a defined role with Memphis. Selected with the No. 21 pick by the Utah Jazz in 2018 and sent to Memphis in the Mike Conley deal last summer, Allen saw his sophomore season cut short by a hip injury that sidelined him for the Grizzlies’ last 20 games before the hiatus. The break turned out to be a boon. Allen has averaged 14.3 points on 60.6% shooting (including 66.7% from 3) in the bubble.

“I’ve literally been working out for months leading up to this now,” Allen said of the playing time he has received. “So, I’m in the shape to handle it.”

One Western Conference coach told ESPN, “He can be valuable off the bench because he can score in bunches,” adding that as a bench player, Allen can be protected defensively by being tasked with guarding the opponent’s second-unit talent. — Dave McMenamin

The youngest and smallest of the NBA’s trio of Holiday brothers, the second-year guard has shown he’s ready to contribute to a playoff team. Holiday has averaged 35 minutes and upped his production across the board.

With Malcolm Brogdon sidelined for the restart debut, Holiday jumped into a starting role and posted 15 points, 10 assists and 5 rebounds with just 1 turnover in a big win over Philadelphia. In Indiana’s first three games, Holiday averaged 14.7 points, 5.3 assists and 1.0 turnovers on 50% shooting before his quieter performance in the Pacers’ first bubble loss on Thursday.

As Victor Oladipo and Brogdon continue to try and find their groove, the Pacers will need Holiday to sustain his strong play. — Eric Woodyard