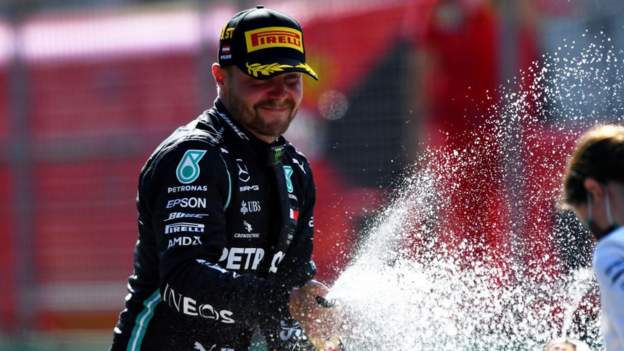 Valtteri Bottas has secured a new contract to stay at Mercedes in 2021.

The Finn, 30, is likely to partner Lewis Hamilton, although the six-time world champion has not yet agreed a new deal with the team.

Bottas said: “I’m very happy to stay with Mercedes in 2021 and build on the success we’ve enjoyed together already.

“The past few years have been all about continuous improvement. I’m confident that today I’m the strongest I’ve ever been, but I can always raise the bar.”

Bottas heads into this weekend’s 70th Anniversary Grand Prix at Silverstone 30 points adrift of Hamilton in the championship after a puncture in the closing stages of the British GP last weekend dropped him from second place to finish out of the points.

Hamilton also suffered a puncture – his on the final lap – but he held on to take his third consecutive win this year.

Bottas said: “We’re in the middle of a shortened season and I want to give my absolute best in every race. The puncture last weekend was a blow in my fight with Lewis, but I’m determined to come back strong this weekend on the same track.”

Team boss Toto Wolff said he believed Mercedes were “seeing the strongest Valtteri we’ve ever seen this year in terms of his on-track performance, but also physically and mentally”.

Wolff added: “He is second in the championship, finished the last season in P2 and plays a very important part in our overall team performance.

“I’m confident we have the strongest driver pairing in F1, and signing Valtteri is an important first step in retaining this strength.

“Valtteri is a hard-working, straightforward guy who has a good relationship with the entire team – including his team-mate, which is not a given when both drivers are fighting for the championship.”

Hamilton’s new contract, when it is signed, is expected to be for more than one year.

Mercedes’ statement announcing Bottas’ new deal said he would drive for the team “at least until the end of 2021”. This suggests the team have an option to retain him beyond that should they wish.

The question for Wolff at the end of 2021, when Hamilton will be on the verge of turning 37, will be whether to retain Bottas alongside him, or promote George Russell, a Mercedes protege who is in the middle of a three-year contract with Williams.

“We trust each other,” Wolff said.

“We have had the same contract for seven years. We have never taken it out of the top drawer to read what’s in there – it fundamentally comes down to commercial terms and we have always been able to find an agreement quickly.

“So I have no concern at all. We will sit down shortly.”