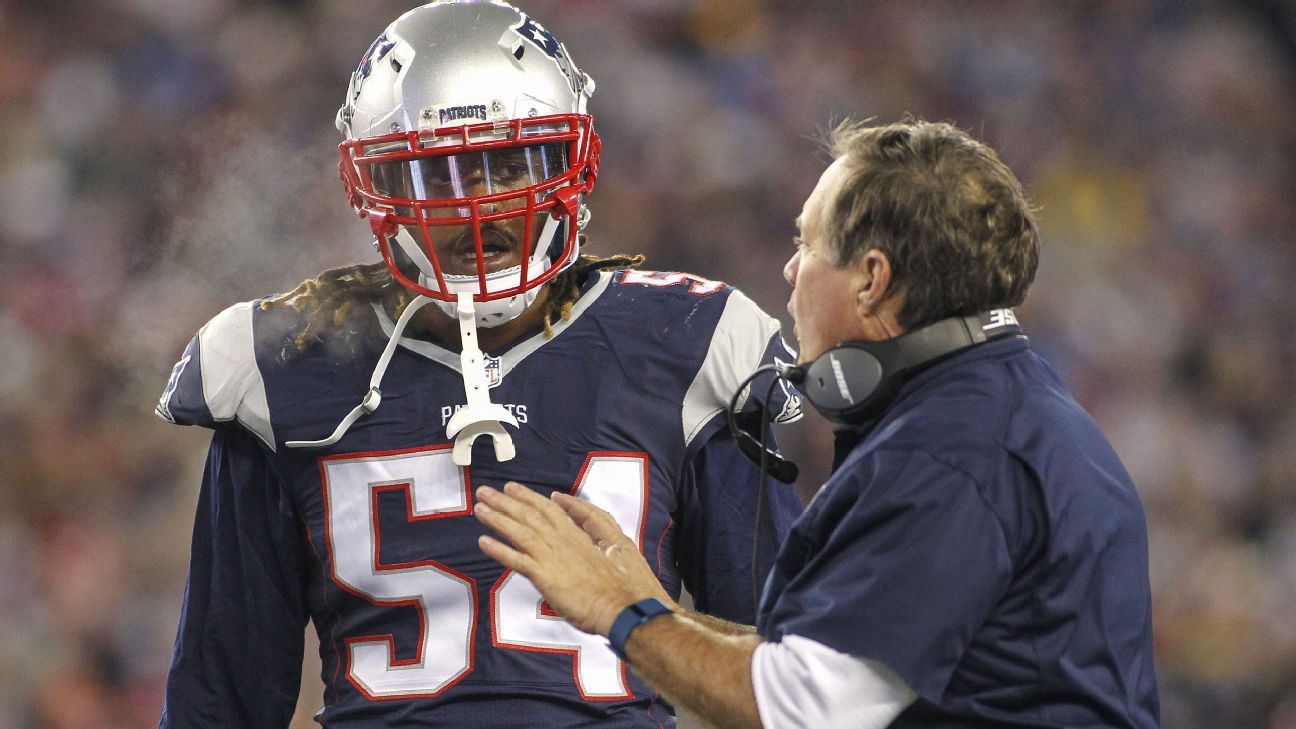 The word of the moment in the NFL (and the world in general) is “unprecedented,” so we won’t pretend to tell you we’re sure what impact the 66 opt-outs will have on the 2020 NFL season. At this point, there’s still no way to be fully confident there will even be a 2020 NFL season, let alone how many games it will have, which games will be postponed/canceled or how future positive COVID-19 tests and outbreaks will otherwise affect the schedule or the standings.

But the opt-out deadline did pass at 4 p.m. ET on Thursday, and even though we lack any kind of historical foundation on which to base this, we thought we’d give you a rundown of what we think the impact of those opt-outs might be. A couple of observations:

The Patriots were hit the hardest

New England saw eight of its players opt out, by far the most of any team. The Browns were second, with five. No other team had more than three. Consider that the Patriots were already dealing with the free-agent departure of the greatest quarterback in football history, and they weren’t exactly in a fantastic position to lose 10% of their training camp roster before anyone even put pads on.

Whether it’s Cam Newton or Jarrett Stidham at quarterback, he’ll be playing behind an offensive line that just lost right tackle Marcus Cannon, who opted out. If the Patriots were relying on their stifling defense to carry them, they’ll have to make do without starting linebacker Dont’a Hightower and starting safety Patrick Chung. Matt LaCosse was in the mix at tight end and Marqise Lee at wideout for a receiving corps that has a lot more questions than answers at this point. New England’s run at a 12th straight AFC East title isn’t going to be an easy one.

The guys in the trenches might be the most concerned

Browns center and NFLPA president JC Tretter said on a conference call a couple of weeks ago that his job will be “more dangerous than ever” this season, and it’s not hard to see why. Tretter’s job literally requires that he and other guys are breathing in one another’s faces on every play. Given what we know about how COVID-19 is transmitted, this is not ideal.

So maybe it’s no surprise that 20 of the 66 opt-outs were offensive linemen and 10 others were defensive tackles. Those are the guys who are up close and in each other’s faces on every play. While Tretter didn’t opt out, his words echoed in our minds as we watched so many trench players make the list. (There were 11 wide receivers, too, but we don’t have as obvious a speculative reason for that.)

Some free agents could benefit from the open roster spots

We mentioned the number of defensive tackles who opted out. Teams that are looking to replace them could take second looks at free agents such as Damon Harrison, Mike Daniels and Tim Jernigan. In general, defensive front sevens are depleted, which could help the market pick up even for edge rushers like Jadeveon Clowney and Everson Griffen, who are still out there looking for jobs.

There were nine defensive backs among the opt-outs, and maybe that’s a development that loosens things up for Logan Ryan, Tramon Williams, Eric Reid or Dre Kirkpatrick. You get the idea. Much the same way injuries do at this time of year, some of the opt-outs might have opened up spots for free agents who have been waiting for something about the market to change in their favor.

One other note: ESPN’s Adam Schefter reported that free-agent guard Larry Warford is opting out of the season, but since Warford is not on a team, his decision is not binding. Opt-out decisions for players on rosters are irrevocable — i.e., if you opt out, you can’t opt back in. But in a case such as Warford, there’s nothing stopping him from changing his mind and signing with a team.

It’s honestly surprising that more players with significant guaranteed 2020 salary didn’t opt out. The case of Broncos offensive tackle Ja’Wuan James illustrates the reason it would have made sense. James was owed $10 million in fully guaranteed salary in 2020. Now that he has opted out, his contract tolls, meaning the whole thing moves forward one year. So he’s owed a fully guaranteed $10 million in salary in 2021, the year he turns 29. (He does get a $150,000 stipend this year that comes out of next year’s salary, so his salary next year goes down to $9.85 million.) His contract called for an $11 million salary in 2021, of which $5 million would have become fully guaranteed around the start of the league year in mid-March. Now, he has $11 million coming in 2022, the year he turns 30, and if Denver wanted to cut him before that season, it would have to make a decision by the middle of March to avoid the $5 million guarantee.

Now, imagine that James hadn’t opted out, and the NFL season started, and they got halfway through it and had to cancel the season because of a COVID-19 outbreak. Here’s what would have happened to James’ contract: He’d have pocketed the $5 million salary for the half-season that was completed. The other $5 million of fully guaranteed 2020 salary would have floated into next season. The rules agreed to by the NFL and the NFL Players Association effectively make that remaining guarantee a sort of heat-seeking missile that finds the next lesser guarantee in the contract and converts it to a full one. So in James’ case, the $5 million that would have become fully guaranteed next March would instead become fully guaranteed at the time the 2020 season was canceled. So if James played out the 2021 season, he’d make his $11 million as originally scheduled and would pocket a total of $16 million over the 2020 and 2021 seasons — instead of the $21 million he’d have made if the 2020 season hadn’t been canceled halfway through. And if, in this scenario, the Broncos decided to cut him before the 2021 season, he’d make only $10 million total over the 2020 and 2021 seasons.

Whatever the reason James had for opting out, there’s no denying it was a smart decision for him to protect his guaranteed money going forward and to maximize his chances of earning the full value of his contract over the next two to three years. It’s surprising that more players didn’t do this.

Teams do get some cap relief out of this

Per the NFL/NFLPA agreement, signing-bonus proration that would have applied to this season moves forward along with the rest of the contract into next season if a player opts out. (For those unfamiliar: NFL contracts allow teams to spread signing bonuses over as many as five years for salary-cap purposes, so if a player signs a five-year contract with a $10 million signing bonus, the team has to count only $2 million per year against the cap for that bonus — even though it’s generally all paid up front.)

So in the case, again, of Ja’Wuan James, the four-year contract he signed in 2019 had a $12 million signing bonus, meaning the Broncos get charged $3 million against the cap every year for that bonus, on top of whatever salary and other bonuses James earns in a given year. James’ cap hit for 2020 would have been $13 million — his $10 million salary plus the $3 million signing-bonus proration. The Broncos basically get all $13 million of that in relief against this year’s cap. They will be charged for his $150,000 opt-out stipend, but not until the end of the year, and that money will come off next year’s salary, so his 2021 cap number will be $12.85 million.

Before James opted out, his 2021 cap number was scheduled to be $14 million, and that now becomes his 2022 cap number. That’s a little bit of a help for Denver, as the 2021 cap is expected to drop significantly as a result of lost 2020 revenue due to the pandemic. The instant relief allows Denver to add another highly paid player if it wants to, but teams also can carry cap room over from one year to the next.

Finally, don’t get upset with the guys who opted out

If you’ll forgive a moment of editorializing, a little bit of perspective helps everyone in times like these. Sure, it’s disappointing if an important player on your favorite team opted out, or if you had Chiefs running back Damien Williams teed up as a cheap keeper in your fantasy league this year. I get it.

Jeremy Fowler polled a panel of more than 50 coaches, execs, scouts and players to come up with top-10 rankings for 2020:

But these were deeply personal decisions for a lot of these guys, who had to factor in concerns about their own health and that of their families. These are, as I wrote earlier, unprecedented times, and the 2020 season should not be viewed by anyone as a typical one. If the NFL plays in 2020, it’s best for everyone to watch and follow it with a lot less intensity than they usually do. We all have to be prepared for the possibility of postponed games, canceled games, last-minute absences of key players due to positive tests, the chance that some teams end up playing more games than others, the possibility that the season starts but has to stop for a while and then picks up again after a few weeks. It’s not going to be normal. It’s not going to be fair. And honestly, that’s OK.

If the NFL plays in 2020, it’ll be for our entertainment and enjoyment. “Super Bowl or bust” isn’t a legitimate mindset when literally no one can predict whether there will be a Super Bowl. Take a breath, be happy it’s happening at all, and let’s respect the personal decisions that the real human beings who play this game for us to enjoy are making about their lives in a time when nothing is easy for anyone.