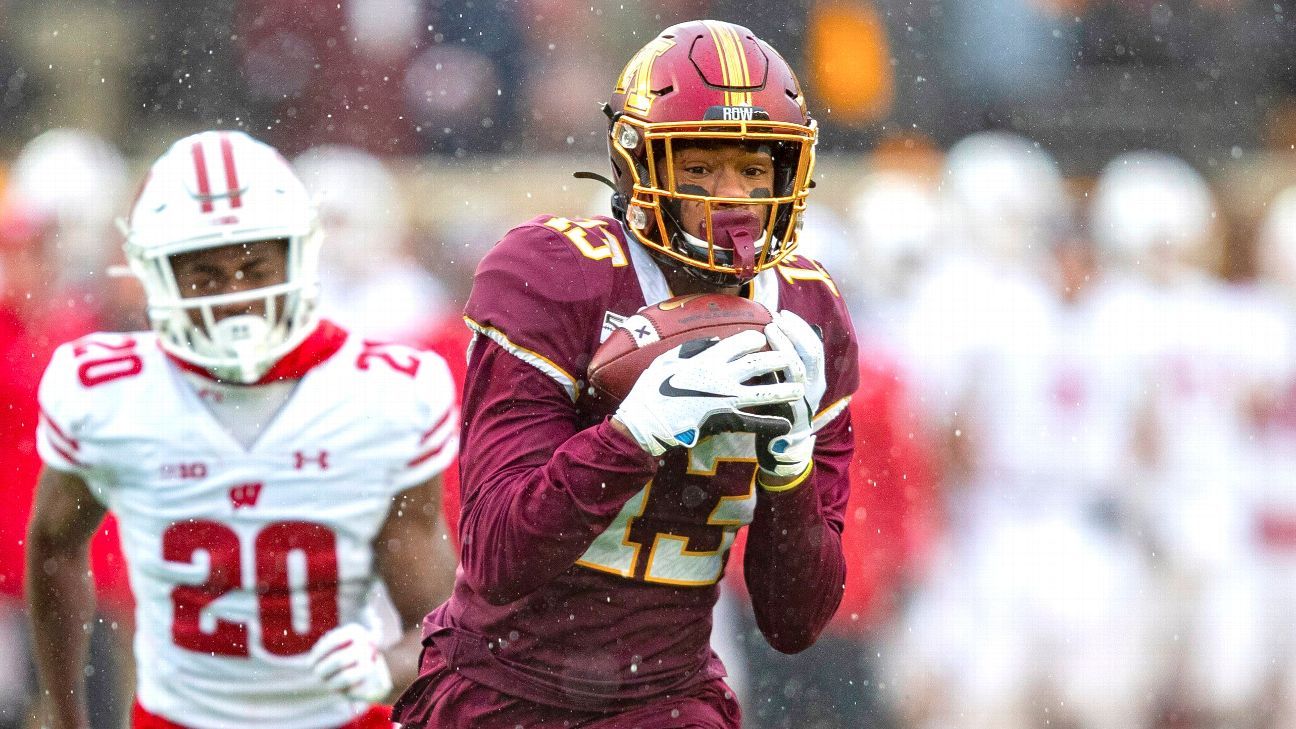 As college football teams prepare for the 2020 season amid the ongoing threat of the coronavirus pandemic, a few top NFL prospects are opting out of playing in the name of both safety and preparation for the 2021 NFL draft. Here’s what you need to know about each of them.

Why he’s opting out: In a video released on his Twitter page on Aug. 4, Bateman said it was one of the “hardest decisions I’ve ever had to make in my life” to not play alongside his teammates and coaches this fall. His decision came down to the uncertainty surrounding the pandemic, saying he needed to put his wishes aside for the wellness of his family. Bateman was already projected as a high draft pick, and while another excellent season could have pushed him even higher up draft projections, for him the risk wasn’t worth the reward. He was named an AP third-team All-American last season.

What it means for the Gophers this season: Bateman and Tyler Johnson were Minnesota’s top two receivers for the 2019 season, combining for 2,537 of Minnesota’s 3,293 receiving yards and 24 of the Gophers’ 31 receiving touchdowns last season. Johnson was selected by the Tampa Bay Buccaneers in the 2020 NFL draft, and now Bateman is gone as well. Minnesota is returning starting quarterback Tanner Morgan and second-leading rusher Mohamed Ibrahim, which will help the offense as a whole. The team will need to rely on receiver Chris Autman-Bell, who was third on the team in receiving and touchdowns last season. The Gophers will also need to see Demetrius Douglas and others step up to help fill that massive void in production. — Tom VanHaaren

Outlook for the 2021 NFL draft: Evaluating Bateman reminds me a lot of how we evaluated JuJu Smith-Schuster and Michael Thomas coming out of college. He is a little overlooked because he doesn’t have game-breaking speed, but he has good size, excellent route-running ability and great hands. He can work outside or in the slot, and he excels in beating press coverage with crafty routes. He gains plenty of separation, plucks the ball on the move with a big catch radius and smoothly transitions upfield — and he’s not afraid to work the middle of the field. No, Bateman isn’t a burner, but he should be an immediate impact player in the NFL. I have him ranked as my No. 7 prospect and second-ranked receiver at this stage, and despite the opt-out, I have him going in the top 10 in my way-too-early mock draft that drops next week. — Todd McShay

Why he’s opting out: Farley had concerns about his health and safety, criticizing testing protocols and mask protocols in a first-person account to NBC Sports. His mother died in 2018 of breast cancer, and he said his top priority is to keep his father safe. Though Virginia Tech defended its testing and safety protocols, Farley thought it better not to put himself at risk for contracting the coronavirus.

What it means for Virginia Tech this season: Farley would have been one of the top returning cornerbacks in college football, so this obviously hurts a Virginia Tech defense as it makes the transition to new defensive coordinator Justin Hamilton. Virginia Tech returned one of the most experienced defensive backfields in the ACC, as Farley had 24 starts the last two years. Without him, the Hokies are not only lacking experience but also have depth issues to figure out. — Andrea Adelson

Outlook for the 2021 NFL draft: I really wanted to see another year of Farley playing on the defensive side of the ball. Yes, he had a big 2019 season, but that was just his second year playing defensive back after he played quarterback and wide receiver in high school. And that was after he tore his ACL in fall practice in 2017. You can see the traits of a top-tier cornerback — Farley is a gifted athlete — but he is still raw. He needs more refinement, particularly as a tackler, where he is below-average. I have a late first-round grade on Farley, who is just outside my top 25 prospects headed into the season. He leads my second tier of corners for the 2021 class, behind Shaun Wade (Ohio State), Patrick Surtain II (Alabama) and Elijah Molden (Washington). — Mel Kiper Jr.

Why he’s opting out: In an Aug. 6 Instagram video announcing his departure, Parsons said, “While I felt safe with the health and safety standards as we returned to Penn State for workouts, the potential risk to the health and wellbeing of my son far outweighed my urge to play football this season.” Projected as maybe the top defensive player in the draft, he also announced that he would remain in school and was on track to graduate in December.

What it means for the Gophers this season: It hurts. Defensive coordinator Brent Pry was looking at deploying him in a number of ways, both at linebacker and in passing situations at defensive end. He was an incredibly versatile talent, and while Penn State still has exciting attacking pieces in the front seven — ends Shaka Toney and Jayson Oweh, linebackers Ellis Brooks and Jesse Luketa — Parsons really might have been the best defensive player in college football had he suited up this fall. PSU’s ceiling is lower now. — Bill Connelly

Outlook for the 2021 NFL draft: The biggest opt-out yet in terms of the season and the 2021 draft, Parsons has the makings of a future NFL star. He’s long and athletic, he can make an impact when dropping into coverage, and he possesses all the range you’d want from a linebacker. When he is turned loose on the QB, he has the instincts and speed to create havoc, as shown by his five sacks in 2019. His game is still developing, and I would have loved to see it jump to the next level in 2020, but Parsons has the talent to be an immediate contributor in the NFL. He is No. 5 on my board, and I have him as one of the first two defensive players off the board in my way-too-early mock coming next week. — Todd McShay