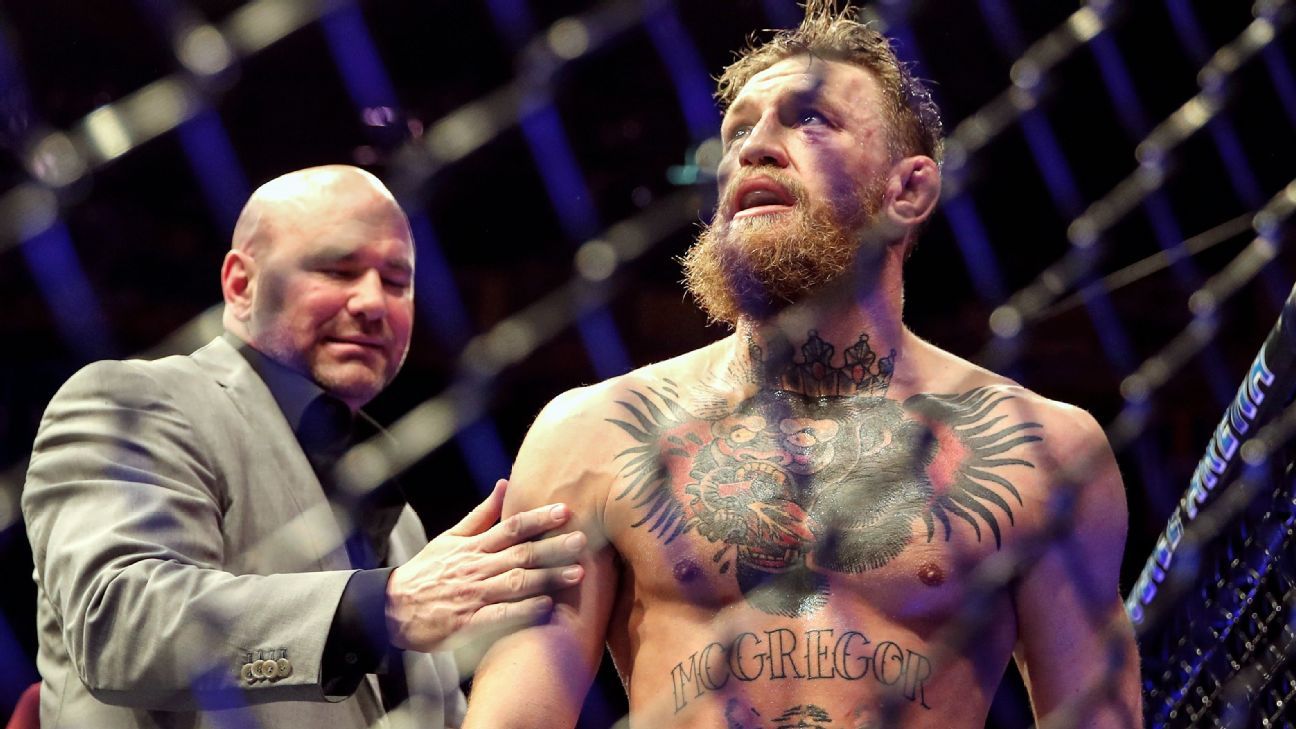 Let’s make something clear right off the bat: Considering the times we are living in, this has been a phenomenal year for the UFC.

Before the coronavirus pandemic, 2020 started incredibly strong. There was the return of Conor McGregor in January, a razor-thin fight between Jon Jones and Dominick Reyes in February, and an all-time classic between Zhang Weili and Joanna Jędrzejczyk in March.

What a first quarter it was.

Then, well, you know what happened.

Everything stopped. The world as we knew it changed.

As promised, though, the UFC was one of the first sports organizations to return to action during the COVID-19 pandemic. Its timing couldn’t have been better because in May, June and July, when people were starving for live sports, the UFC was on the air almost every weekend. Fight Island was a smash hit. The COVID-19 testing was successful in terms of not having any outbreaks, the ratings were up, and according to UFC president Dana White, 2020 merchandise sales have already surpassed all of 2019’s.

Other than their being no ticket sales — and I know that’s nothing to scoff at — there hasn’t been much to complain about this year. From a business and PR perspective, it has been a good year for the UFC.

Except for one thing.

If you ask me, there has been only one serious blunder this year. And unfortunately for all involved, it’s a big one.

Remember late last year, at a media conference in Moscow, when McGregor told us he would fight three times in 2020?

Remember most people laughing it off because McGregor had not fought three times in a year since 2016 and couldn’t stay out of trouble? But then we thought, man, if the UFC could get three fights out of McGregor in 2020, what a massive year that would be for all involved.

Remember how well McGregor handled the buildup to the Donald Cerrone fight and how he looked in that fight and the buzz his win generated?

Remember when he said he’d be willing to fight again in March? And that, heck, he might even fight four times this year? Most importantly, remember how it seemed like a once frosty relationship between McGregor and the UFC brass was back on track?

Well, almost seven months later, here we are, and McGregor has fought for 40 seconds in 2020. That’s a shame.

The UFC finally has a healthy, motivated, focused, eager, staying-out-of-trouble McGregor, and it can’t figure out how to get him back in the cage. How does this happen?

Is it the UFC’s fault that the pandemic hit? Absolutely not. Is it McGregor’s? Of course not.

Would it be better if fans could buy tickets for McGregor’s fights? Sure. His gates usually generate around $15-18 million. That’s significant, and I understand that the UFC would want to buy some time so it can capitalize on a McGregor gate after months of closed-arena events.

But guess what: Fans aren’t going to be attending events for a while. Is the plan to ice the biggest draw this sport has ever seen — in his prime, no less — until the pandemic ends? That could mean no more McGregor fights until 2022.

I know that he “retired” in June. No one believes that was a true retirement. Remember, he told me in January that he’ll never actually retire. He definitely isn’t walking away at 32 years young.

Truth be told, I wish he never used that word because it took away from his actual message. That was a mistake.

Think about that for a second. The biggest star this game has ever seen is begging to be tagged in, and nothing is happening.

There are no active talks, sources say. No negotiations. No nothing. In fact, UFC president Dana White said recently that he considers McGregor retired, and White guaranteed that McGregor won’t fight again in 2020. What will happen in 2021 is uncertain, and though White doesn’t think McGregor will remain retired, he said there are no plans at this point for a McGregor fight next year.

How does this happen? Pre-pandemic, the talk was for McGregor to return July 11 against Justin Gaethje. I’m told that as of mid-February, he was asking to return. The UFC wanted him to be an alternate in case something happened to Khabib Nurmagomedov or Tony Ferguson prior to their scheduled meeting in April. Earlier in the year, McGregor said he was staying in shape in case one of those two fighters withdrew, which seemed reasonable, considering that they had four previous bookings fall through. But when the pandemic canceled that fight and the travel ban was put in place, it opened the door for Gaethje to fight on May 9 against Ferguson in Jacksonville, Florida. Ultimately, Gaethje won the interim belt. In any event, the idea of being an alternate didn’t sit well with McGregor. He wasn’t interested in that role. He wanted a guaranteed fight. I don’t blame him for that. Once that plan was out the window, the focus should have been on a McGregor return in the summer.

Did you see those reported PPV numbers in July for UFC 251? Does anyone have any doubt that McGregor could have drawn close to two million, had he been on that card? I strongly believe this, considering that there were very few other North American sports going on at the time.

But that ship has sailed. The NBA is back. So are MLB and the NHL.

That isn’t to say a McGregor fight wouldn’t do huge business right now. It absolutely would. I have no doubt about this.

Yes, the UFC has main events booked until October. I get that. I know he won’t share the bill with, say, Nurmagomedov in a couple of months. But you know what? The times are very different. You don’t have to book venues or sell tickets. You can book a McGregor fight card for any day of the week. Heck, you can make it a one-fight card, and it would draw more than a million buys. There has never been a surer thing in MMA. Do it at the Apex or in Abu Dhabi. Easy money.

Who says no to a Nathan Diaz trilogy in an empty arena? Imagine that theater.

Who says no to a Ferguson fight?

Who says no to a Jorge Masvidal fight?

Who says no to a Dustin Poirier rematch?

Shall I keep going?

It just looks like the relationship between McGregor and the UFC is deteriorating by the minute, and now McGregor is flirting with the idea of fighting Manny Pacquiao, which might only worsen his relationship with UFC brass. Honestly, I don’t think McGregor really wants the Pacquiao fight right now. One day? Sure. But I think he was intent on fighting three times this year and winning the lightweight title by the end of the year. I think, just like his “retirement,” this is another reminder to the brass that he is ready and willing … and frustrated. How did we go from the harmony of January to this?

UFC brass and Conor McGregor: For the sake of the fans, can you get on the phone? Start talking again. Figure this out.

In a year filled with victories big and small, don’t let what was shaping up to be the biggest win of them all turn into the end of a business relationship.

Because like he told me months ago and regardless of what anyone else thinks, when it comes to MMA business, McGregor is still very much “the bread.”