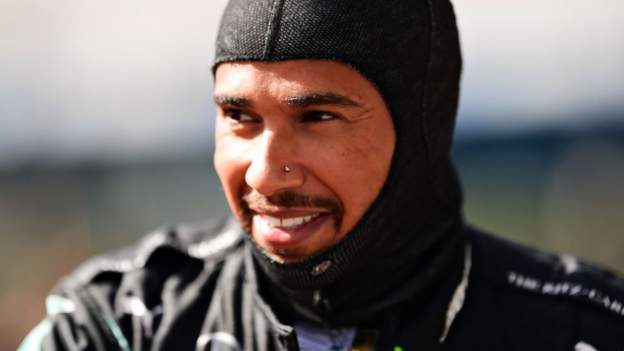 Lewis Hamilton says this is the “most important year” of his life as he chases a seventh world title amid the global campaign against racism.

The Mercedes driver has been outspoken in his campaigning for the Black Lives Matter cause after the death in police custody of George Floyd in May.

Hamilton, Formula 1’s only black driver, said: “It’s a special year and I don’t take that lightly. To fight for a championship in a time like this is empowering and exciting. Who would have thought there could be change?”

He is on target to beat Michael Schumacher’s all-time record of 91 victories this season, and to equal his achievement of seven world titles.

Hamilton has been at the forefront of F1’s campaign against racism and to increase diversity in the sport this year, as well as in organising demonstrations promoting the cause at the start of Grands Prix.

F1 has left it up to individual drivers to choose how to demonstrate their support. All have worn anti-racism T-shirts, but while the majority of drivers have taken the knee alongside Hamilton, a minority have not.

Asked if he felt the message was being diluted by some drivers not taking the knee, Hamilton said: “I don’t think so. I’m in it, not seeing it from the outside. So I don’t have the same perspective as everyone else.

“I would like to think just that we are doing something and [that] we are together is the important thing.

“Of course, you look at the other sports and most have Black Lives Matter tops on and football teams all take the knee.

“It is ultimately down to personal choice and you can’t force people into doing things.

“But it is a time where we can continue to educate each other and help people understand what that symbol actually means. Because I think a lot of people don’t understand what it means.”

Taking a knee is a gesture that originated in the NFL in the US as a protest against racism and police brutality.

On Thursday, Ferrari’s Charles Leclerc, one of the drivers who chose not to take a knee, revealed he had been accused of racism on social media for his decision.

Leclerc was one of the first drivers to speak out against racism when Hamilton asked his peers to do so in the wake of George Floyd’s death.

The 22-year-old said: “It is very sad to see how some people manipulate my words to make headlines making me sound like a racist. I am not racist and I absolutely hate racism. Racism is disgusting.

“Stop putting me in the same group as these disgusting people that are discriminating [against] others because of their skin colour, religion or gender. I’m not part of them and I never will [be]. I’ve always been respectful to everyone and that should be the standard in today’s world.

“And to whoever is using my image to promote their wrong ideas, please stop. I’m not into politics and I don’t want to be involved in that.”

‘Not the right time’ for Hamilton contract talks

On Thursday, Mercedes announced that Hamilton’s team-mate Valtteri Bottas had signed a new contract and would remain with the team in 2021.

Hamilton is out of contract at the end of the season and he said he had not yet started talks over a new deal because of his sensitivity to the impact of the coronavirus crisis across the world.

“It doesn’t feel like the right time,” Hamilton said. “When you think about so many people in the world have lost their jobs, and are unemployed, to sit and negotiate a big contract, it doesn’t seem like the most important thing I need to apply time to right this second.

“I do want to continue with the team, and it’s not a big effort to sit down and get it done, just right now I don’t feel comfortable with it.

“So I’m going to wait a little bit. I’m looking forward to continuing on, particularly as we have just started up a new chapter as a team in terms of how we educate ourselves, how we understand what we are going to do to be more diverse moving forwards and be more inclusive.

“I am super-excited about what’s possible to do with Mercedes-Benz and this team moving forwards. At some stage it will get done. I’m not stressed.”