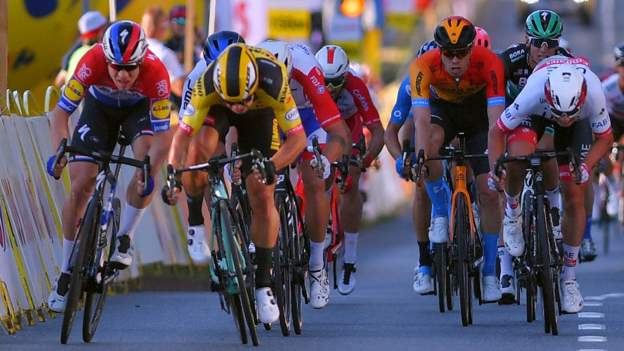 Several riders and a race official were caught up in a horrifying crash on stage one of the Tour of Poland.

Dylan Groenewegen, 27, drifted across the road in the final, downhill sprint and he and fellow Dutchman Fabio Jakobsen collided at high speed just before the line in Katowice.

Jakobsen, 23, then fell over the barriers and collided with an official.

Groenewegen, who was subsequently disqualified, and several other riders also fell after crossing the line.

Race organisers said an air ambulance was called to the finish but the condition of those involved in the crash has not been confirmed.

Deceuninck-QuickStep said their rider, Jakobsen, was being tended to by doctors.

Jumbo-Visma sprinter Groenewegen was initially named the stage winner before being disqualified.

“Our thoughts go out to Fabio Jakobsen and other people involved in today’s terrible crash in the Tour of Poland – crashes like these should not happen,” said Jumbo-Visma on Twitter.

“We offer our sincere apologies and we will discuss internally what has happened before we may make any further statement.”

The podium ceremony was cancelled and the stage results have not been released.