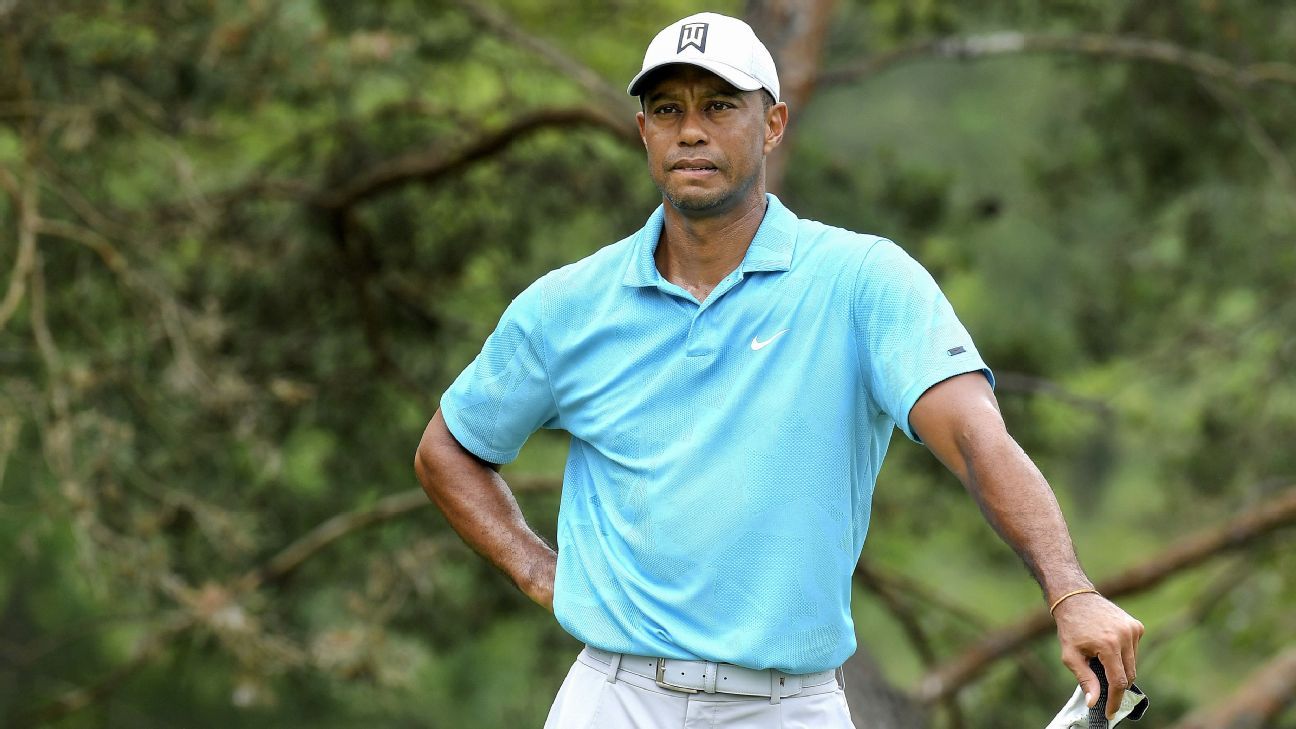 Even though there will be no fans and no roars, this PGA Championship at TPC Harding Park won’t lack drama. There’s Tiger Woods, and whether his back will hold up. There’s Brooks Koepka, and whether he can win the Wanamaker Trophy for the third straight year.

Here’s a look at all the biggest questions — and some answers.

What do you expect from Tiger?

Bob Harig: My instincts say he hasn’t played enough golf to be truly competitive this week. Tiger is unique in that many times in his career he’s come back from long layoffs — last year at the Zozo immediately comes to mind — and performed well. But you never know when he’s not going to be at his best physically, and cool mornings in California won’t help. Tiger has made a career of doing what seemed impossible, but it seems a big ask this week.

Michael Collins: I expect Tiger to do the same thing he did at Memorial. Have a good day, a bad day, make the cut on the number, then have a so-so weekend. That being said, it’s Tiger, so if he did find some magic, would any of us be surprised?

Ian O’Connor: Not a ton. I mean, if anyone in the history of the game can win a major after so few reps, Tiger Woods is the guy. But despite his history at Harding Park, I think asking TW to win this one is asking for a little too much. He’ll make the cut and scratch out a late back-door top 15.

Mark Schlabach: Maybe more than we expect? I didn’t anticipate much from him at the Memorial after the long layoff, but he has historically risen to the occasion at majors. He came out of nowhere to win the Masters last year, and the PGA Championship has a similar build up because of the pandemic. Don’t forget that Tiger has had a lot of success at TPC Harding Park, albeit when he was much younger and stronger. He went 5-0 at the 2009 Presidents Cup and won the WGC-American Express Championship there in 2005.

Nick Pietruszkiewicz: I normally fall in the anything-is-possible, expect-something-big category. Not this time. Too much going against him this week. Lack of reps. Back acting up the one time he’s actually played the past five months. Cool-to-cold conditions in San Francisco. This week has miss-the-cut possibilities all over it. (Except, it’s 2020, so who really knows anything).

We’ve sort of gotten used to having no fans at PGA Tour events. But this is a major. Will it be different?

Harig: No doubt. The biggest events draw the largest crowds and the PGA Championship especially has seen its share of massive turnouts in recent years. Think Bellerive two years ago in sweltering heat. Think Bethpage last year, with New Yorkers taunting Brooks Koepka as his final-round lead slipped away, only to massively cheer him in the end. To not have that is understandable, of course, but still a huge disappointment.

Collins: Different than what it’s been like at PGA Tour events? Nope. But different cause it’s the first major with no fans? Yeah, a little. It’s much stranger to be in August talking about the first major. There is still a buzz around the property, but it’s not even close to normal. The weekend is where it will feel the most different.

Schlabach: No question, and Webb Simpson and others talked about it in Memphis last week. It’s one thing to play the Rocket Mortgage Classic or 3M Open without fans, it’s an entirely different animal to do it at the PGA Championship, one of the four biggest tournaments of the year. It was eerie walking around TPC Southwind last week, when the only folks on the course were players and caddies, officials, security guards and a few of the players’ wives and girlfriends. It was a ghost town and it felt so strange.

Pietruszkiewicz: Yes. It’ll be different. But that doesn’t mean it’ll be less. Koepka, with his own special version of defiance, made that clear on Tuesday. Basically, he said when you pull into the parking lot, even though there is no one around, you feel like you are at a major. I still have the visual of the 2018 PGA at Bellerive, when Tiger was making a Sunday charge and rolled in a birdie putt at No. 9. The place was losing it. So, yeah, it’ll be different. But the tension, the drama, the significance will not be lacking. They are still giving someone the big trophy Sunday night, whether there are five people or 50,000. And the players know that.

Harig: It undoubtedly helps those who are not used to playing in front of big galleries. And there are a couple dozen of those who compete on the PGA Tour each week without much fanfare. Getting into the mix and having to deal with all the commotion is part of the task, and it’s easier without all that drama. While all players benefit in some one ways without spectators — there’s simply less hassle — some like Tiger Woods and Phil Mickelson and Rory McIlroy thrive off the atmosphere. They are used to it and so that advantage is gone.

Collins: It will hurt Tiger the most because when he needs the energy of the crowd to feed off, they won’t be there. It will help Rory McIlroy the most because being paired with Tiger the first two days when there was a crowd was disastrous. Now, it’ll be easily managed.

O’Connor: It’s probably going to hurt the emotion players, the guys who feed off the fans’ energy. I put Tiger in that category. It should help Justin Thomas, since he’s the star and major winner who most recently won a big event with no fans in the house.

Schlabach: Do you think Patrick Reed has had a pretty good time since golf returned to play without the heckling and boos? And there’s no question that fans can affect the players. Remember the PGA Championship at Bethpage Black last year, when Brooks Koepka was getting the famous Bronx cheers and the gallery was suddenly pulling for Dustin Johnson? Koepka nearly blew his record seven-shot lead going into the final round and had to hold on for a second straight PGA Championship title.

Pietruszkiewicz: Sure, a few. The biggest, of course, is Tiger. If, despite my prediction, he plays well, he gets an extra push from fans. It helps him and hurts others in the field. Koepka could also be hurt. Remember, if the rowdies at Bethpage Black don’t start cheering “DJ! DJ! DJ!” late Sunday as Koepka was trying to cough away a huge lead last year, enough so that it refocused him, he might have had a Greg Norman-like collapse and lost the thing. The players it helps? The young players, for sure. Less to think about. One less thing to rattle the nerves.

Brooks Koepka is going after three in a row. Will he get it?

Harig: No. and it’s more about the odds. Nobody has won three straight majors since Peter Thomas did it at The Open from 1954-56. It’s just so hard to win, let alone three in a row. Koepka was trying to do it at the U.S. Open last year, and finished second to Gary Woodland. That in itself was a remarkable accomplishment.

Collins: Yes. He’s getting the three-peat. Because he’s gonna play angry and wants to show the world, again, that on the biggest stage in the biggest moment he’s the man — and Bryson DeChambeau is not.

O’Connor: I say no. Hard to rule him out of any major, and we all saw what he did in Memphis. I just don’t think one good week after his injury-riddled drought is enough for me to see a three-peat here. But I wouldn’t bet the ranch against it.

Schlabach: Yes. As soon as the PGA made the hairbrained decision to leave the two-time defending champion out of the featured groups on Thursday and Friday, they might as well have engraved his name — again — on the Wanamaker Trophy. Koepka feeds off being slighted, even in the smallest way, and he’ll have a chip the size of Alcatraz on his shoulder this week. He figured some things out in Memphis after struggling since the return.

Pietruszkiewicz: He’ll be factor. It’s hard to imagine he won’t be a factor at a major, particularly one he has won two years in a row. But he won’t pull off a third straight. Too many players playing really well since the restart and, in all honesty, Koepka has had only one strong week since returning.

Everyone is focused on Tiger and Brooks, or Justin Thomas, Rory McIlroy, Jon Rahm or Bryson DeChambeau. So who might be the player few are talking about who might shock everyone and raise the Wanamaker Trophy come Sunday night?

Harig: Tyrell Hatton. The Englishman won at Bay Hill prior to the shutdown, then came back with consecutive top-4 finishes at the RBC Heritage and Rocket Mortgage. He struggled last week in Memphis, but no matter. He’s had 10 top-20 finishes in his past 15 worldwide starts, including two victories and a tie for sixth at the last major played — last year’s Open. For someone ranked 14th in the world, he does not get a lot of attention.

Collins: How quietly Jordan Spieth comes into this week and this tournament. The rough is not nearly as bad as it could have been. The greens are some of the flattest you’ll find in a major. And Spieth mentally is in a good place for a course that sets up for his game.

O’Connor: Brendon Todd. It took one brutal round Sunday to go from the guy everyone would be talking about to the guy nobody’s talking about. But he started to show signs last week of his Mr. November form in 2019, and in a sense his 5-over final round in Memphis took all the pressure off him heading to the PGA.

Schlabach: Has Jason Day finally figured something out? The 32-year-old Australian missed three of four cuts when the tour returned from its three-month break because of the pandemic, but his last three results were pretty good: tied for 7th, tied for 4th and tied for 6th. He’s second in shots gained: around the green, 21st in shots gained: tee to green and 16th in shots gained: total. Yes, his ball-striking still leaves something to be desired, but he’s getting closer. The 2015 PGA Championship winner has played very well in the event, finishing in the top 25 in each of the last seven.

Pietruszkiewicz: Well, earlier this week, I picked Collin Morikawa to win. So that should qualify as the answer here. He’s 23 and he has star written all over him. Might as well get started now.