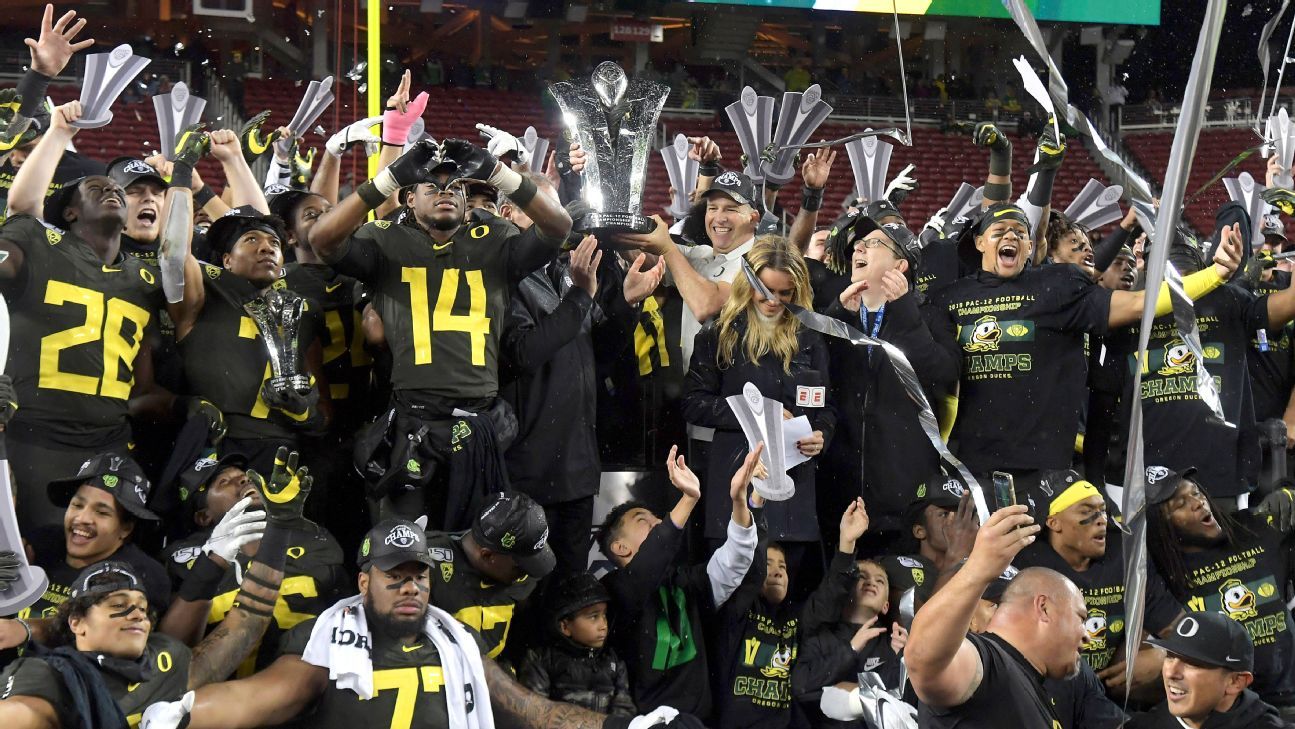 Pac-12 players have organized a movement that is going to get them something. We don’t know what they’re going to get, but they will walk away with more than they came with because they’re operating with the right blueprint.

The players demanded they receive safety precautions for the ongoing coronavirus pandemic, adequate testing for the virus, medical insurance for six years after eligibility ends, the ability to make money off of their names, images and likenesses, and 50% of each sport’s total conference revenue evenly among athletes in their respective sports.

Arguments can be made for and against any of these things happening for the players, and we won’t do that here. However, if you are against the players gaining any of these things, it might be good to ask yourself why — because it would be inherently good if they did. You’d certainly want them for your child.

The most important part here is where players say they will opt out of Pac-12 fall camp and games unless their demands are guaranteed in writing for not just scholarship athletes, but walk-ons, as well. That’s the only leverage college football players have ever had.

This is the biggest movement we’ve seen by players in college football history. The beautiful part is, they’re going about it in the best way possible, providing the blueprint for movements that will undoubtedly be necessary in the future. (On Monday, Pac-12 commissioner Larry Scott said the conference is reviewing the group’s concerns and would be discussing them with its members over the next couple of days.)

There aren’t a lot of ways for college athletes to affect change within the current system. They aren’t unionized, and have little-to-no power individually. However, because Pac-12 players are unified in this particular movement, have a clear list of demands and are threatening to not play in games, they are able to leverage what little power they do have to get into the pockets of schools and the NCAA.

This formula isn’t necessarily new, it’s just never been seen at this scale in college football. In 2015 at Missouri, when football players joined a protest on campus, due to the way the president of the university system handled complaints about racism.

The players threatened to boycott the team’s game against BYU, which would have cost the university a cool $1 million. After 30 Tigers announced their planned boycott, the rest of the team and head coach Gary Pinkel voiced their support the next day. The day after that, they got the results they wanted, as the president of the University of Missouri school system resigned. The bottom line: When you boycott games, you’re getting close to, or even inside the NCAA and its members’ pockets.

The movement the Pac-12 student-athletes are pursuing is like that of Missouri in 2015, but on a much larger scale. The unity is a key factor, and we’re not talking about a single movement at one school, which would be easier for people to brush aside. The players currently have a group chat going with more than 400 players from the Pac-12 and beyond. Depending on how many of those players join the movement, they only become stronger.

UCLA defensive lineman Otito Ogbonnia told ESPN’s Heather Dinich, “We’re extremely serious. We’re really big on the big picture here. Our biggest thing is getting a seat at the table when they’re discussing things that are going to affect our lives forever. We kind of feel that the majority of the time we aren’t necessarily heard. A lot of people are passionate about this. This encompasses a lot of peoples’ lives.”

The specificity of the demands was also wonderfully laid out by the athletes. They didn’t broadly ask for equality, and then call it a day. The players detailed — with headers, roman numerals and bullet points — specifically what they want, how they want it and why they need it. Because it’s one thing to ask for racial justice, but quite another to specifically ask the conference to, for example, “Form annual Pac-12 Black College Athlete Summit with guaranteed representation of at least three athletes of our choice from every school.”

Some of the demands, whether from a logistical or a timely manner, will likely not be met. But in the art of negotiation, you always ask for more than what you think you’ll get. That’s even more important when going up against the college football power structure, which has never been very giving to begin with.

The pretty bow on top of the unity and demands, is the withholding of labor. Money is the only language the NCAA and its member schools speak. When it comes to the Pac-12, we’re talking about a league revenue of $530 million. And when players from every single team in the conference talk about not playing, that $530 million becomes at risk, and now you’ve got their undivided attention.

They don’t like when something threatens the power structure, and will avoid that at all costs. They’ll hear complaints but won’t listen until they think they’ll lose a dime. And even then, in most cases they will only give up so much to maintain the current amateur athletics model. But this time is different than any other time, and the NCAA and its schools are about to lose their grip on that model.

There are two big factors that make this time different. One is, of course, the coronavirus pandemic. It’s one thing for players to not have the benefits they are requesting in a normal year, but it’s a whole other ballgame given the current health risks.

The coronavirus has made it impossible for the NCAA to hide under the guise of the amateur model. The discussion around college football and the pandemic has centered around how much money would be lost and how devastating it would be for institutions if football isn’t played. While seeing this conversation go on, the players are feeling vulnerable. As a result, they’ve made specific protections from the virus part of their demands.

The athletes are also on campus when their fellow students aren’t, which proves that they aren’t like regular students. It’s one thing when the athletes aren’t compensated despite being the essential motor of the money machine. But without any medical protections or a uniform plan for coronavirus testing right now, the unfairness of the entire thing is too glaring for even the players to sit in silence on. Their lives are at risk, and the Black athletes know that the virus is killing them at a higher rate than anybody else.

Which brings us to the other major factor in play that makes this so opportune for the players more than ever — the impact of the Black Lives Matter movement. All of the players, regardless of color, deserve compensation and the benefits outlined by the Pac-12 players. The Black Lives Matter movement, and the change it has brought about in a short amount of time has unquestionably emboldened the players. It’s why racial injustices are highlighted as the key concern in their letter.

It’s more unmistakable right now when America is having its eyes opened further to racial inequality since the killing of George Floyd, in a sport where majority Black athletes are making more money than you can count and not seeing a dime of it. And with blatant examples of how college football environments aren’t the most welcoming for Black athletes in places such as Iowa City, Stillwater, or elsewhere, college football is damn near a mirror image of America.

UCLA defensive back Elisha Guidry told ESPN’s Heather Dinich, “COVID-19 is affecting Black lives. If you look at a lot of the college football teams in the country, it’s a majority of Black players, so you have that tied together. You also have the wealth inequalities in the country, the class issues, guys on teams that might not come from a lot, but football is their ticket out, so I feel like it’s all kind of tied together in a sense. It’s a realization that Black lives are in danger in our country.

“All of these issues are being spoken about, and it affects us in college football as well. Us unifying and wanting to talk about these issues is very important and all tied together.”

Former San Francisco 49ers quarterback Colin Kaepernick did the difficult thing back in 2016 and took a knee during the national anthem to have his message heard. It was successful in drawing attention to the issues, but only a handful of his fellow NFL players at the time joined. Now, you see plenty of athletes across sports kneeling. It has become a lot easier to commit to demonstrations than it was four years ago. Hell, coaches such as Bill O’Brien have said they will kneel with players this season.

This movement by the Pac-12 athletes is not equivalent to taking a knee during the anthem in the present day. This is the next thing, the thing that has not the “easiest” or “safest” to stand by, in part because college football’s power dynamics still exist, and a fear of retribution — as we’re seeing with Nick Rolovich and Washington State — still exists. This is the thing Kaepernick did when he first knelt for the anthem, the thing that starts the conversation a lot of people don’t want to have, but need to.

There will be plenty of players who decide not to partake in the boycott, which is fine. If anything, that’s just further evidence the players who are participating are doing what’s uncomfortable. But they’re doing what’s necessary for progress, for current players and those in the future.

Because when it comes to making progress on racial injustice (or anything else) in America, that has been the only thing that has ever worked.

College football isn’t going to be any different.