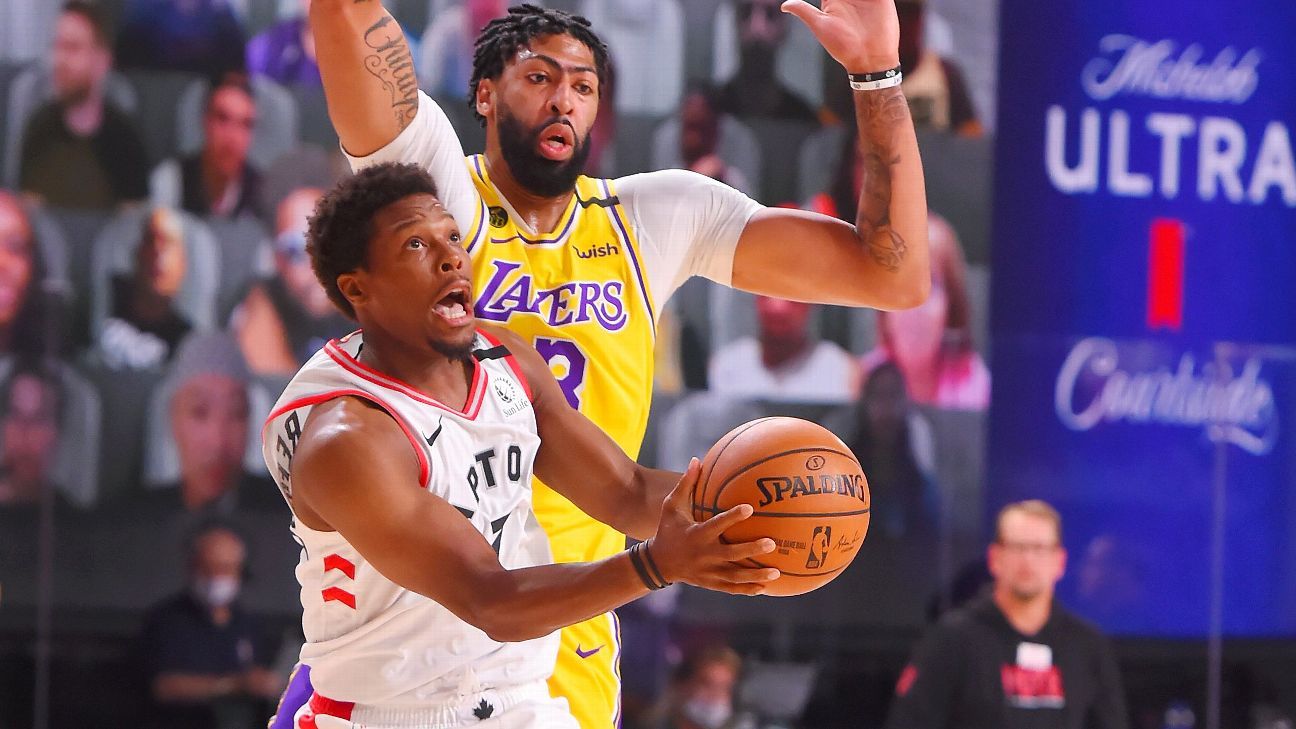 The Toronto Raptors are the defending NBA champions, yet they remain horribly under the radar in this year’s title race. That needs to change. Dating back to before the league’s stoppage in March, this team has won 23 of its past 27 games. They’ve been awesome in their first two restart matchups, beating the Los Angeles Lakers by 15 points on Saturday night and outlasting Jimmy Butler and the Miami Heat on Monday.

Still, a recent poll of my esteemed ESPN colleagues revealed that only three of 16 NBA experts expect Toronto to come out of the Eastern Conference. That’s harsh, but Nate Silver’s robots are even harsher. The FiveThirtyEight prediction model, which is even called RAPTOR, is currently insulting its namesake — giving the dysfunctional Philadelphia 76ers a 29% chance of making the Finals while the Boston Celtics have a 19% chance. The Raptors are down at 10%, but some folks have noticed how good they are.

“It’s a great team,” LeBron James said after Saturday’s game. “No ifs, ands or buts. Exceptionally well coached. Championship DNA, you can never take that away from a ball club … The media may not talk about them much or give them as much credit because Kawhi [Leonard] is gone, but players know what type of team they are.”

LeBron James discusses the “championship DNA” that the Raptors possess and explains why they are more of a threat than they get credit for.

James is absolutely right. Toronto has a 71.6% win percentage over the past three seasons, the best in the NBA. In that same time period, the Raptors have also recorded a plus-6.8 point differential — again, No. 1 overall. This team is legitimate with or without last year’s NBA Finals MVP.

While they’re grabbing hold of the East’s No. 2 seed with the league’s No. 4 net rating, the Raptors’ first two games in the bubble have revealed one key driver for their success: This is an emerging defensive juggernaut.

In a league increasingly dominated by perimeter production, head coach Nick Nurse and the Raps have found a way to frustrate the dominant tactics. The basketball world took notice when Nurse dusted off a highly unusual box-and-one defense that frustrated Stephen Curry and the Warriors in the Finals last year, but that was just the beginning. Nurse’s staff has earned a reputation for innovative, unpredictable and unconventional approaches.

“The whole fourth quarter they were playing some janky defense … Over the course of the game, it’s kinda disrespectful to leave Andre Iguodala open like that. … He’s made big shots like that before.”

-Steph Curry on the finish to Game 2 pic.twitter.com/eQ9Bymczv2

Nurse’s weird bag of defensive tricks includes full-court presses, 2-3 zones, surprise traps and double-teams. The real trick, though, is having a roster full of guys ready and willing to implement these strategies. Masai Ujiri and the front office have loaded the roster with a bunch of guys who love to fight on the unglamourous end of the floor.

It all starts with Marc Gasol and Serge Ibaka shoring up the frontcourt with elite rim protection and communication. Toronto allows 41.9 points per game in the paint, trailing only the Milwaukee Bucks in that department.

The wings are led by Pascal Siakam and his stunning versatility. At 6-foot-9, Siakam can do it all. He’s become one of the NBA’s best 3-point deterrents, leading the NBA in contested 3s this season, per Second Spectrum tracking data. And shooters have only made 31.2% of the 337 3s that Siakam has challenged, the third-best mark among the 33 players with at least 250 contests.

The backcourt includes both Fred VanVleet‘s remarkable perimeter activity — he leads the league in deflected passes, and was great on Curry last year — and Kyle Lowry‘s never-ending love of drawing charges.

Bottom line: These dudes love the dark arts of defense. They each thrive in their own unique ways, but the collective strength is undeniable. It allows the Raptors to implement diverse, unorthodox defensive strategies tailored to each opponent. Game to game, you never know what you’re going to get, and the results are solid.

Raptors opponents are making just 33.6% of their triples this season, the lowest such figure in the NBA. But the numbers behind that stat are interesting. Toronto actually allows the easiest 3s in the league, according to Second Spectrum’s shot quality data. The negative difference between opponent’s expected field goal percentage on 3s — when accounting for things such as defender distance and shooter location — and their actual shooting performance is greater than that for any other team by a considerable margin.

There’s certainly some luck involved here, but there’s a case that the Raptors’ No. 2 overall defense should be credited more to strategy and execution. The Heat came into Monday’s matchup as the league’s most efficient 3-point shooting team, but Toronto held Miami to just 31% from deep in large part by limiting Duncan Robinson — who trails only James Harden in total 3s this season — to just one made 3 on four attempts. The way Robinson was swarmed and hounded was not luck.

The Raptors also like to shut down unassisted 3s, which are surging in popularity. Back in 2013-14, NBA shooters attempted just 4.5 such shots per 100 possessions. This season that number has surged to 7.8 — but not against the Raptors, who give up 5.7 such tries per 100 possessions, the fewest in the NBA, per Second Spectrum. And opponents are converting just 29% of those looks, which ranks second in the league.

All told, Raptors opponents are managing to convert just 1.6 unassisted 3s per game, meaning they have to try to find offense elsewhere. Good luck.

Following the departure of Kawhi, many NBA observers expected Toronto to crater. But the leftover Raptors have very different expectations. This team is playing like it can win it all again, and its case is strong. As Steph Curry and Giannis Antetokounmpo both found out last year: Defense wins championships.