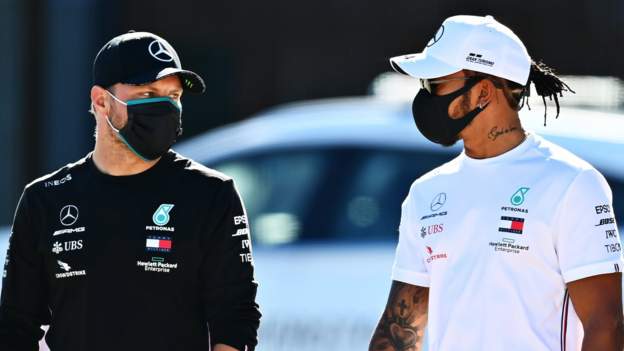 Mercedes F1 boss Toto Wolff has rejected suggestions that this year’s championship would mean less than others because of the shorter season.

Lewis Hamilton is 30 points clear of team-mate Valtteri Bottas after winning the British Grand Prix, in a season several races shorter than intended.

“I don’t think any championship is less valuable than another one,” Wolff said.

“You could argue a shorter championship means (you can afford) less faults and races where you don’t finish.”

The 2020 season was originally scheduled to have 22 races, but the first 10 were postponed or cancelled as a result of coronavirus.

The season finally started last month and so far has only 13 scheduled races, although F1 says it expects to have at least 16 grands prix in the end.

This is fewer than has been typical this century, but was a standard season length in the 1980s and ’90s.

Wolff, who was talking to Radio 4’s Today programme, added: “For us and certainly for sports insiders, it is as valuable as any other.”

However, he added that the team were in no way thinking that the championship was there for the taking, despite a dominant start to the season that has seen Hamilton win three of the four races so far and Bottas the other.

“We are not yet set for another title,” Wolff said, “because you have to have the mindset of permanent scepticism, and really stay both feet on the ground. It is not over until it is over.”

Hamilton described Sunday’s race as “the most dramatic ending I can remember” after punctures for both Mercedes drivers in the final two laps.

Bottas’ left-front tyre failed while he was running second to Hamilton with two laps to go, and it dropped him out of the points.

The same tyre then failed on Hamilton’s car early on the final lap, and he had to nurse the car home on three wheels while Red Bull’s Max Verstappen closed in fast.

Wolff praised Hamilton’s sang-froid in managing to judge his speed perfectly in a damaged car.

“You learn with experience and you build up some resilience. In this situation of crisis, you see the tyre has gone and you need to be careful it doesn’t delaminate completely because then you can’t take it around the corners any more,” Wolff said.

“He just found the right mixture between going fast enough to make it over the line first and on the other side making sure the tyre wouldn’t delaminate.”

The Mercedes were not the only cars to suffer tyre problems.

McLaren’s Carlos Sainz also suffered a puncture, on the penultimate lap, as did Alfa Romeo’s Kimi Raikkonen, although his appears to have been caused by a front wing failure.

F1 tyre supplier Pirelli said it would launch a full investigation into the failures and would report before this weekend’s forthcoming 70th Anniversary Grand Prix, which is also at Silverstone.

Pirelli is supplying tyre compounds one step softer for this weekend’s race. So the ‘soft’ tyre that was unpopular at the British Grand Prix as a result of its lack of durability, will be the ‘medium’ this weekend, and the ‘hard’ tyre most teams preferred for the majority of the race is not available.

Wolff said: “We are not going to see a one-stop race, but for sure an exciting two or three-stop.

“There can be two reasons for these punctures, which not only happened on our cars. Either debris, which they can’t do anything against… or the robustness of the structure that simply collapsed because of the loads around Silverstone.

“I am sure Pirelli will do a thorough investigation. It has proved to be a good tyre for all of us. If it’s debris, we just have to make sure we clear the tyre better; if it’s robustness, I guess we are going to get some prescriptions in terms of stint lengths.”