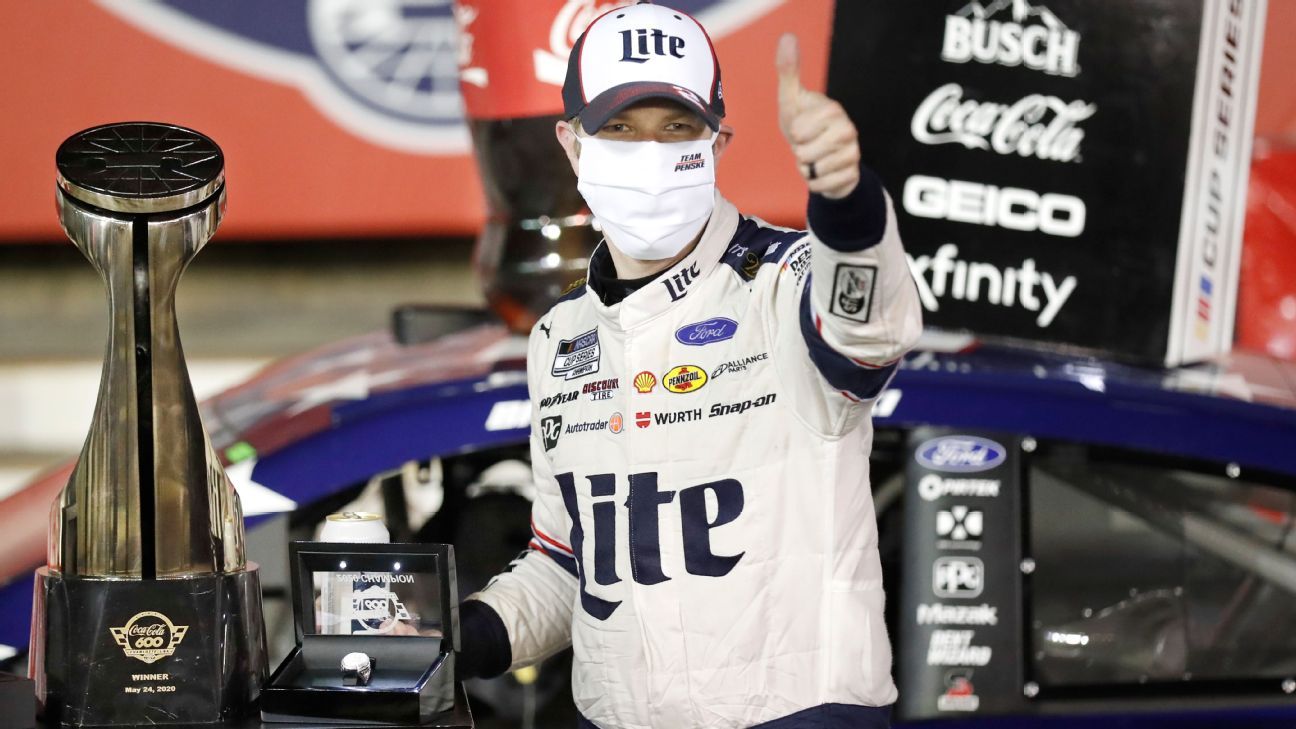 CHARLOTTE, N.C. — Brad Keselowski finally got a contract extension from Team Penske, announced the day after NASCAR’s 2012 champion won his third race of the season.

Keselowski has been open in his desire to remain with the organization where he gave Roger Penske his first NASCAR championship. The 10-week shutdown because of the coronavirus pandemic prolonged extension talks, but a deal was announced Monday.

Terms were not released, but a person familiar with the contract said the extension is one year through 2021. The person spoke to The Associated Press on condition of anonymity because the team did not disclose details.

Keselowski won Sunday at New Hampshire and trails only Denny Hamlin (five wins) and Kevin Harvick (four) in Cup wins this season. All three of Keselowski’s victories have come since the season resumed in May and with a new crew chief.

“We are pleased that Brad will continue to be a part of our organization,” Penske said. “Brad not only demonstrates talent and skill on the track, but his leadership away from it and his dedication to our partners have had a huge impact in making our organization one of the best in NASCAR.”

Keselowski’s deal was announced as NASCAR prepares to race twice this weekend at Michigan International Speedway, his home track. He has 33 career victories — 31 since joining Penske in 2010, the year he won the Xfinity championship.

“I have been racing for Team Penske for the vast majority of my NASCAR career, and to continue to represent Roger Penske, our partners and his organization is exactly where I want to be,” Keselowski said. “We’ve accomplished a lot of things together over the years, including winning both the Cup and Xfinity championships, the Brickyard 400, the Southern 500 and the Coca-Cola 600. Now my goal is to win the Daytona 500, another championship and continue to build Team Penske into the best NASCAR team in the garage area.”

Penske before the season swapped the crews for all three of his Cup teams in a move that paired Keselowski with Jeremy Bullins, the only crew chief on the Penske roster without a Cup title. The organization announced a contract extension with Ryan Blaney in March right before the season was suspended while Keselowski was stuck in limbo.

When racing resumed, Keselowski won the Coca-Cola 600 at Charlotte Motor Speedway and followed it with a win at Bristol Motor Speedway. He is second in the Cup standings and appears to be the strongest competition for Harvick and Hamlin.

Keselowski said after Sunday’s win that the crew swap was what he needed to turn his performance up a notch.

“I’ve had a great team since I’ve been here in Cup. … Sometimes I’ve allowed myself to fall into that good category. Good isn’t good enough,” he said. “This has been a really good challenge for me.”

He also noted that the changing economic market made it difficult for an established veteran to get a lucrative contract. The top free agents — such as Keselowski — command the highest salaries in a sport going through a financial reset.

Sponsors have scaled back how much funding they will provide, and the majority of teams need multiple companies to pay for a full season. It has caused driver salaries to drop at the same time newcomers who can bring sponsorship can buy a seat in the Cup Series.

“The landscape is very strange, not just because of the virus,” Keselowski said, noting the bar for talent has “been lowered significantly since I’ve been a part of the sport.