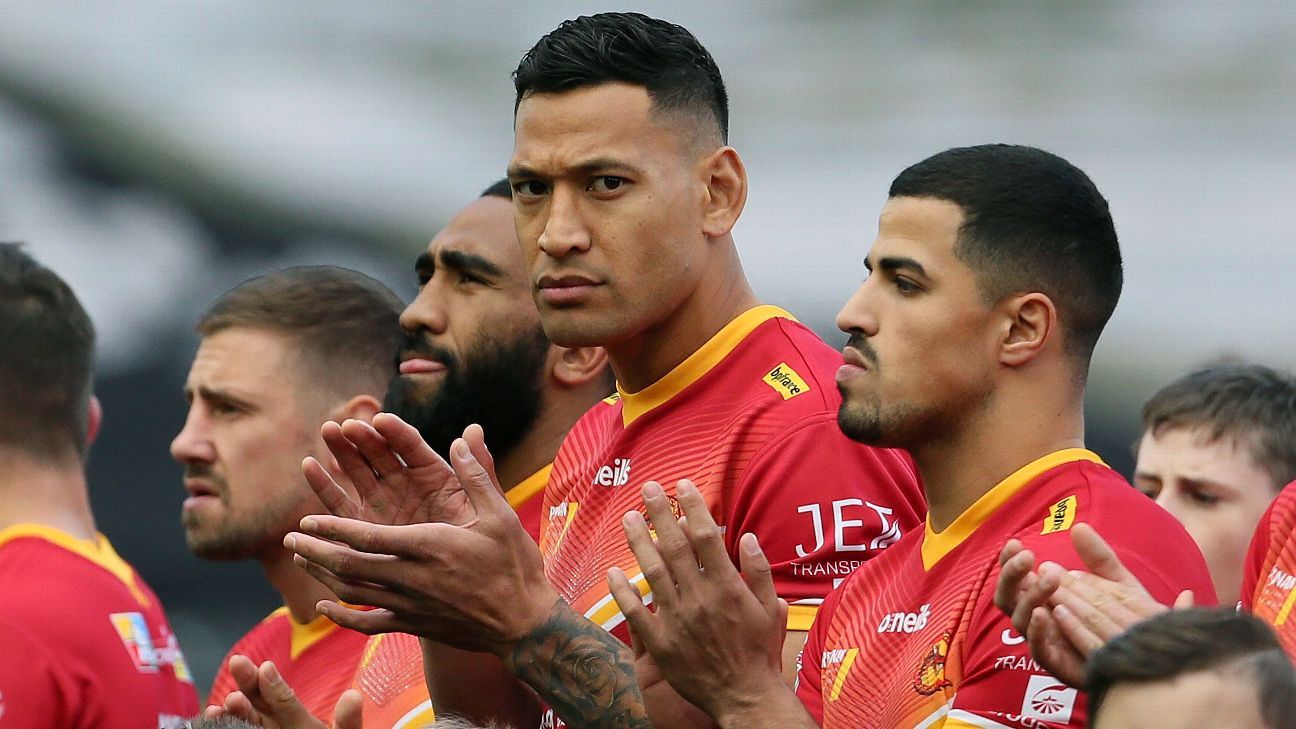 Israel Folau has courted more controversy by refusing to join teammates and opponents in taking a knee to acknowledge the Black Lives Matter movement in Super League’s return on Sunday.

The former Wallabies fullback’s Catalans side were hammered 34-6 by champions St Helens in the first match since the competition was halted due to the coronavirus in March.

However, the biggest talking point of the game came before kick-off when Folau remained standing while the 25 other players on the field and the referee, knelt briefly at Headingley.

The Black Lives Matters movement has grown around the world since the death of American George Floyd while being arrested in May.

And all recent Premier League football matches have seen players take a knee before kick-off – a move Super League said they wanted to replicate.

Folau has courted controversy ever since his homophobic comments on social media that saw him sacked by Rugby Australia.

Catalans coach Steve McNamara defended his decision not to kneel, and said he was entitled to make a personal choice.

“As a group of players and coaching staff, we spoke about it in depth and as a club we are completely against racism and all for equal opportunity,” McNamara said.

“But there were some players and staff who made the decision not to take the knee. That was based on personal choice, they have their own reasons for doing that, and we decided we would respect anyone’s personal choice on the matter.”

Bereft of both spectators and scrums, the game marked the arrival of a new set of regulations highlighted by the “six again” rule copied from the NRL, and St Helens proved themselves more adept to change.

Saints had James Graham back in their side, 17 years since he made his debut, and it was as if he had never been away.

The Dragons were the first Super League club to resume training yet they looked disjointed for most of the game and trailed 28-0 before James Maloney scored their only points of the game.

It was the Lachlan Coote show for the Saints as former Penrith and North Queensland full-back scored 18 points in a dominant display.

Leeds staged a dramatic late fightback to earn a golden-point victory over Huddersfield and go top of the table.

The Rhinos looked destined for defeat in the second match of a double-header at Headingley when they trailed 26-6 after an hour and had winger Ash Handley dispatched to the sin bin.

But they struck back with three tries in five minutes despite being a man short and levelled the match through Konrad Hurrell two minutes from the end of normal time to set up the position for skipper Luke Gale to snatch an unlikely 27-26 victory with a 40-metre drop goal in the first period of extra time.