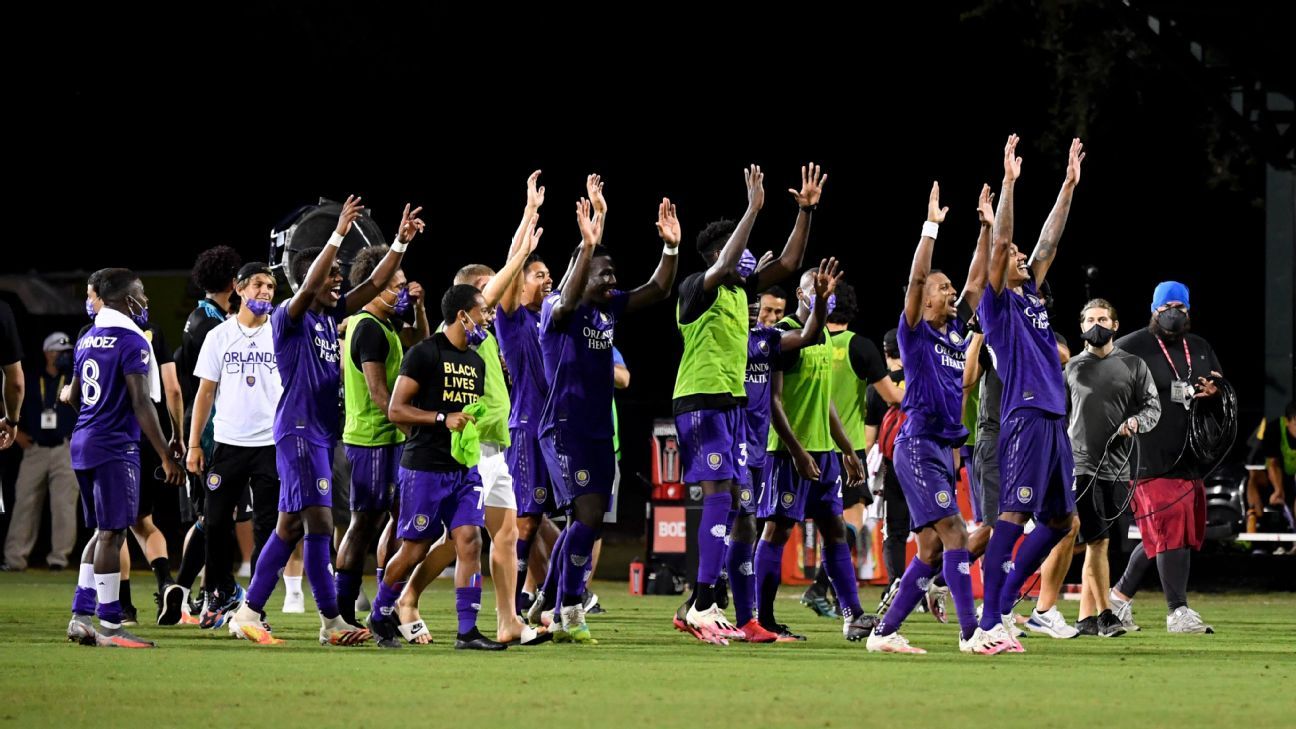 Throughout the MLS is Back tournament, Orlando City has performed in a way that is at odds with its history in the league. Not only has the Lions’ patient buildup been pleasing to the eye, but the team has been defensively solid, conceding three goals in four games. The results has been better, too: Orlando finished atop Group A, with wins over NYCFC and Inter Miami to go with a 1-1 draw against the red-hot Philadelphia Union, and dispatched the Montreal Impact 1-0 in the round of 16.

Then the Lions showed how they have completely broken with their brutal past, winning their quarterfinal over league powerhouse LAFC on penalties after normal time finished 1-1. Even manager Oscar Pareja, a man as even-keeled as they come, senses the stark improvement in his squad.

“If we’re not the favorites to win, we accept that. It’s normal,” Pareja said. “But we will continue to improve. One day we will be.”

Along the way, Chris Mueller has been one of the finds of the tournament on the right side of midfield, while Nani looks revitalized on the opposite wing. Mauricio Pereyra is poised to live up to his designated player billing as the team’s central creative force, while Uri Rosell and Junior Urso have provided an effective bulwark in front of a back line led by Robin Jansson and Antonio Carlos.

Now Orlando heads into Thursday’s semifinal against either Minnesota United or the San Jose Earthquakes — 8 p.m. ET, ESPN2, live in the U.S. — and even if the Lions bow out, the future looks brighter than at any point since the team’s debut season in 2015.

“We came up with a mentality of not just coming to play in the tournament. We came to set the tone for the season, and be the protagonist, because they can do it,” Pareja told ESPN in his trademark delivery that makes him seem part-coach and part-mystic. “So I think we’re mentally in a place that’s absorbed that. I see a change in that since the very beginning of the season, and that change is probably increasing their confidence.”

This isn’t the first time that Orlando has started a season brightly. In 2017, the Lions got off to a 6-1-0 start. In 2018, Orlando went 6-2-1 to open the year. But just like every other MLS season, it wasn’t enough to get into the playoffs. That said, even amid the COVID-19 pandemic, Orlando appears to be in a better place organizationally.

For the first five seasons of its MLS existence, OCSC seemed to constantly be in its own way, even with world superstar Kaka on the field. It cycled through GMs and burned through three managers. Now there seems to be a greater degree of alignment between the executive suite and the technical side, especially after owner Flavio da Silva and CEO Alex Leitão hired fellow Brazilian Luiz Muzzi away from FC Dallas to be the EVP of soccer operations. The team opened a new training center in the offseason, and, most critically, Muzzi tapped his longtime friend Pareja to come in as manager.

“My choice was Oscar from day one, but of course, he had a job [with Club Tijuana], and we didn’t know what was going to happen with that,” said Muzzi. “He speaks the players’ language. He was a player, he understands it from a planning point of view, he understands what it takes not only on the field but off the field; things that they need to do to make sure that everybody buys into his philosophy. That’s easy to buy into, because the whole coaching staff, they work so hard, and they are always thinking about ways to make the team better.”

Pareja has known near-constant success in MLS, or something close to it, in his coaching career. He took Colorado to the playoffs in his second season with the team. After moving to FC Dallas in 2014, he made extensive use of the team’s academy and led FCD to a Supporters Shield/U.S. Open Cup double in 2016. After leaving FCD in 2018, an uneven, one-year stint with Tijuana followed. While Pareja led Xolos to the 2019 Clausura playoffs, he was unable to build on that success as Tijuana missed out on the 2019 Apertura postseason.

Pareja didn’t go into the specifics of his time in Tijuana, other than to say it was beneficial being exposed to different coaches and different players.

“Those things just made us look inside and out, what we have, what we don’t have, and that just naturally made us grow,” said Pareja.

In Orlando, one can see both similarities and differences to what Pareja built in Dallas. The peak of that Dallas team had Pareja exploiting the verticality of winger Fabian Castillo. There’s no player like that on the Orlando roster, but Pareja is once again making use of a diminutive playmaker, which not coincidentally is what he was as a player. In Dallas, it was Mauro Diaz. This time, it’s Pereyra.

“I think there are some bold lines that we all have,” he said. “And I do like to play with somebody who can create and organize the game in the middle, so I had the fortune to have Diaz in the times in Dallas. Now I found Pereyra here. And when I went to Xolos, I had Miller Bolaños too. It was easier with them on the field, and to lay out the ideas and not make too many adjustments.”

What’s changed is that even with Pereyra in the fold, Pareja has opted for a more methodical approach in attack, using a steady build-up style through the use of outside backs Ruan and Joao Moutinho. Ruan in particular was effective in getting forward during the win over Montreal. The Brazilian was an effective weapon on Friday as well, winning a penalty that was ultimately saved by LAFC keeper Kenneth Vermeer.

There are risks to such an approach, of course, but forward Tesho Akindele, who also played under Pareja in Dallas, feels there is balance to the side in that the holding midfielders and center-backs are making sure they are in good spots, even when Orlando is in possession.

“They’re not just relaxing, waiting for the next attack to come,” said Akindele about the team’s defenders. “I feel like a lot of people would think, ‘Oh, if we’re attacking, the defenders are just kind of chilling and waiting for their time to play,’ but they’re playing just as much when we’re attacking as when we’re defending. I think that helps balance the risks of our fullbacks pushing up a little higher.”

Beyond the team’s tactical approach, Orlando has a steelier mentality under Pareja, despite having much the same squad as in 2019. According to ESPN Stats & Information, last season Orlando dropped 17 points from games in which it held second-half leads. That was tied for second-worst with San Jose (17) and behind Sporting Kansas City (22). Orlando has not dropped any points from winning positions this season in MLS competitions (3-0-0).

“[Pareja] is intense in his dedication to the game of soccer, he’s intense in wanting to improve himself and that kind of carries throughout his life,” said Akindele. “I think that is contagious. And, you can really feel it around the field, what the impact is when we’re in a game. Everybody kind of has raised their intensity this year.”

That Pareja has turned things around so quickly really isn’t a surprise given his previous success in the league. But Orlando has also been trying to get pointed in the right direction for years. Now this team has a distinct style, and a winning one as well.

“I’m not trying to think for them, but trying to help them to think,” said Pareja. “I’m trying to create tools under a structure, just make it easier for them to play the way they can. So when I’m going to the details, this is just making them understand the game more.”

So far, the Orlando players have taken those lessons to heart.