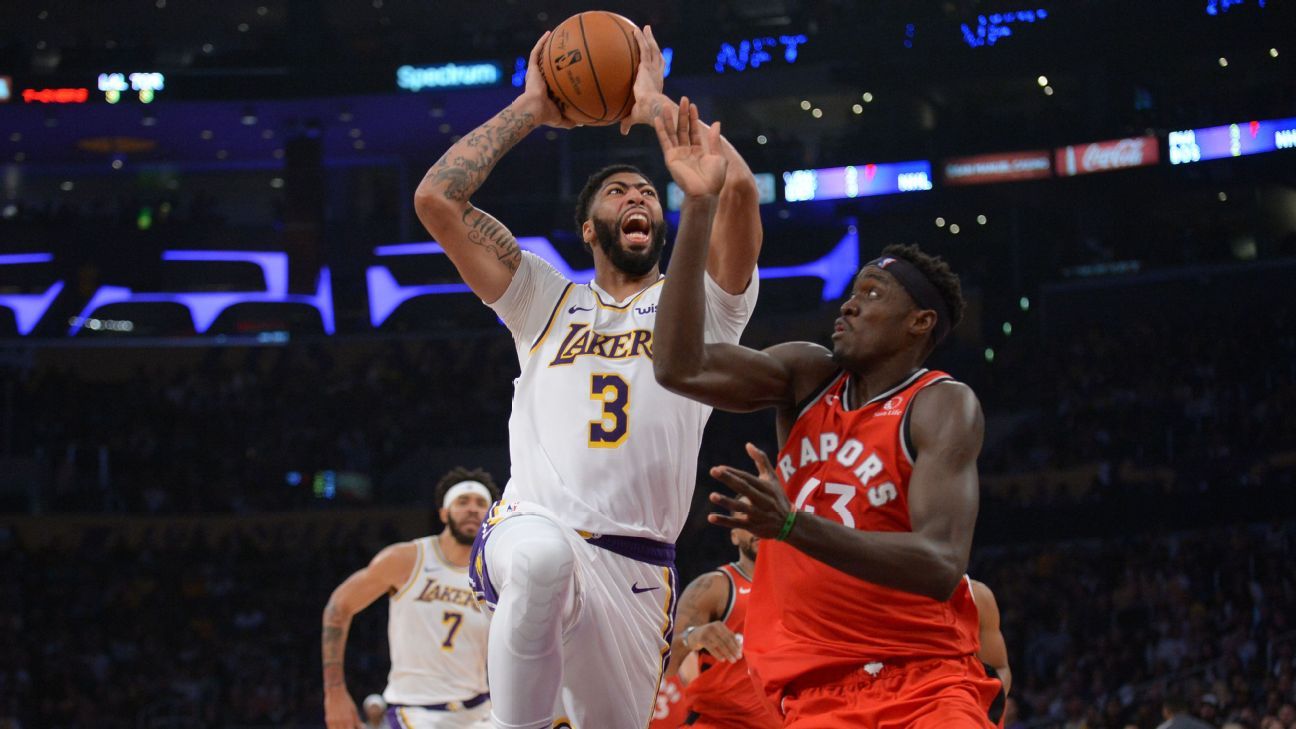 The Los Angeles Lakers and LA Clippers gave fans a reason to tune in on opening night of the NBA restart for the reseeding games, with the Lakers edging the Clippers in a close one. They’ll both be back in action Saturday with two games that offer their own intrigue.

The Clippers play first, taking on the New Orleans Pelicans (6 p.m. ET, ESPN) and their dynamic rookie, Zion Williamson. (Can we still call a guy a rookie more than a year after he has been drafted?)

Anyway, both the Clippers and the Pelicans played, and lost, Thursday, which should give the matchup an extra edge. Nobody wants to go 0-2 to start an eight-game seeding scenario, although a loss would certainly seem more consequential for New Orleans.

The Pelicans’ 106-104 loss to the Utah Jazz dropped them to 28-37, and they enter Saturday 3½ games behind the Memphis Grizzlies for the No. 8 spot in the West — and a game behind the Portland Trail Blazers for the No. 9 spot, which is where they need to be if they want to force a play-in game should they not nab the eighth seed outright.

Williamson, whose playing time was limited after he had to leave the campus to attend to a family emergency and had his training camp basically cut in half, still might not be ready to make a full impact. He scored 13 points against Utah on 6-for-8 shooting, but New Orleans was outscored by 16 in the 15 minutes he was on the floor, and Williamson failed to grab a single rebound.

A Clippers loss to the Pelicans wouldn’t be as alarming — in fact, some championship coaches like Doc Rivers invite a little adversity to get their team’s attention. But it would cut into their lead over the Denver Nuggets and Utah Jazz for the No. 2 spot in the West. And while home-court advantage might be moot at a neutral site, staying as the second or third seed means that the Clippers would avoid the Lakers in the postseason until the conference finals, theoretically giving them more time to get their rhythm and jell again after the hiatus before taking on that challenge.

Later Saturday, the Lakers play the defending champion Toronto Raptors (8:30 p.m. ET, ESPN) in Toronto’s first game of the restart. The previous time they met, back in November, Toronto won 113-104 at Staples Center. Raptors role players Chris Boucher, Terence Davis and Rondae Hollis-Jefferson combined for 38 points off the bench. The Lakers already earned their first 50-win season since 2011 by beating the Clippers, and a victory over Toronto would allow the Lakers to clinch the No. 1 seed in the West. (They can also back their way into No. 1 with the next Clippers or Nuggets loss.)

Which, in all honesty, could run counterproductive to the work Lakers coach Frank Vogel insists still needs to be done.

“We are far from a finished product,” Vogel said Friday. “It feels like we have a long way to go to reach the habits and discipline we were playing with when we entered the hiatus.” –Dave McMenamin

The Denver Nuggets will enter their first seeding game short-handed, as starters Jamal Murray, Gary Harris and Will Barton have all been declared out against the Miami Heat (1 p.m. ET on ESPN). Murray, who played 25 minutes in the Nuggets’ final scrimmage on Monday, has been dealing with left hamstring tightness. Harris, who was a late arrival to the bubble, has a sore hip, and Barton has been nursing right knee soreness. Harris didn’t play in Monday’s scrimmage, while Barton was limited to 18 minutes.

The game that started, and, really, stopped it all. After a four-month delay, the Thunder and Jazz finally play. When we left off, this game was about to be for the current 4-seed in the Western Conference. And it maintains those large implications as both teams are firmly in the mix for a top-four seed. It’s an important game — for a lot of reasons. — Royce Young

Both teams are 0-1 in the bubble, and in both cases lost tight, toss-up games. The Pelicans looked excellent, even with Williamson’s minutes restriction — for about 3½ quarters. The Clippers fared similarly, except they just couldn’t find enough offense down the stretch. The Pelicans are more desperate than the Clippers here to get their first restart victory, though, because there aren’t many chances available. — Young

After beating the Clippers on opening night, the Lakers get the defending champs in another high-level matchup. There’s a lot of talk about how the already-great chemistry of the Raptors has only strengthened in the bubble, and while they’re an Eastern Conference threat, they’re still seen as somewhat of a dark horse. There’s an opportunity to make a strong statement here against the presumed title favorite. — Young

The only bubble team playing on Saturday is New Orleans (vs. Clippers). And it is also the last time the Pelicans play a team with a winning record. So while the schedule gets “easier” on paper for New Orleans, the Pelicans will face teams playing for their playoff lives for the rest of the month after Saturday, just like they will be.

The Trail Blazers got off to exactly the kind of start they needed, taking down the Grizzlies in the opener to close the gap because things start to get tougher from here. The Celtics played the Bucks to the wire, getting a terrific game from Marcus Smart and looking every bit prepared, conditioned and ready. The Trail Blazers are definitely a better team today than they were in March. They’re going to need to show it against Boston. — Young

There’s a decent chance the Bucks might drop 190 points on Houston. But then again, the Rockets might return the favor, because the microball is still cooking. James Harden didn’t show any signs of rust, and for the most part, Houston just continued on with what it was doing in March. If anything, the restart might have given the Rockets more of a chance to work out some issues, and a showdown against the Bucks is a great chance to try it out in a rematch of both teams’ season opener.— Young

Why these games matter for seven underrated NBA title contenders

Which teams are gearing up to crash the NBA Finals? Our experts break down the top choices.

Social justice messages each NBA player is wearing on his jersey

Here’s a team-by-team list, including the reasons for some of their choices