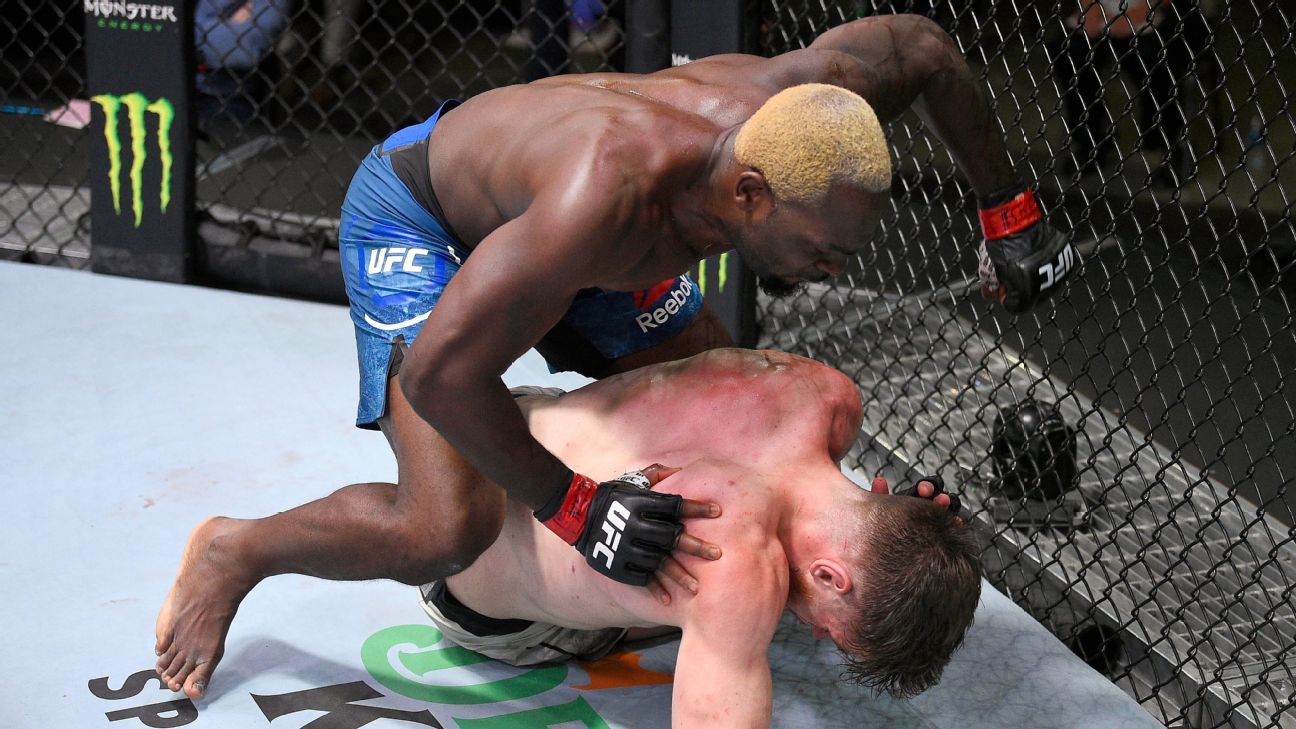 The only way to the top of UFC’s middleweight division is through Derek Brunson. On Saturday, he slammed that door shut for a red-hot prospect.

Brunson stopped Edmen Shahbazyan via TKO 26 seconds into the third round in the main event of UFC Fight Night in Las Vegas.

The previously undefeated Shahbazyan had all the hype coming in as the former training partner of UFC legend Ronda Rousey. But Brunson nearly finished him at the end of the second round and then did so early in the third.

The card took place with no spectators at the UFC Apex, a facility owned by the promotion right across from its corporate campus. It was the first event in the United States after a monthlong run in July on Yas Island in Abu Dhabi, United Arab Emirates, which was dubbed Fight Island.

Brunson said in his postfight interview that he was disappointed he was a heavy underdog. He said he is 3-0 since going to train under coach Henri Hooft at Sanford MMA — and recalled advice Hooft gave him when he first got to the South Florida gym.

“So many people were betting against me and had negative things to say. [But] I had so much support — way more than the negative,” Brunson said. “… Ever since I’ve gone down there, [Hooft has] believed in me. He’s always said, ‘You’re not a gatekeeper. Show these guys you’ve got it. You want a title? Let’s go.’ I’m ecstatic right now.”

Brunson was a +290 underdog coming in. This was the largest upset in a UFC main event since Michael Bisping (+400) knocked out Luke Rockhold to win the UFC middleweight title at UFC 199 in 2016, according to ESPN Stats & Information.

The first round was very tight. Shahbazyan landed some hard right hands and a big knee. Brunson was able to take Shahbazyan down and connect on left hands. In the second, Brunson took over, wearing out Shahbazyan with his high pace and wrestling.

Brunson was able to get a takedown on the tired Shahbazyan late in the second, slip into dominant position and land huge ground-and-pound. Brunson crushed Shahbazyan with a big elbow that left Shahbazyan bloody. Referee Herb Dean was close to stepping in to call the fight off when the bell rang to end the round.

“I cracked him with a big elbow [at the end of the second round] and heard Coach Hooft saying, ‘Two more elbows,'” Brunson said. “I cracked him with another and thought the referee was going to stop it right there. He didn’t. I got my composure back and listened to my corner.”

When the third round began, Brunson started his onslaught again. He came forward with a big left hand, took Shahbazyan down and landed more ground-and-pound. This time, Dean had a quick hook and called it off, awarding Brunson a TKO.

Brunson said his immediate thoughts were going home to see his family after being apart for the past four weeks while training. He said he will start thinking about his next opponent with his coaches within a week.

Brunson (21-7) is considered one of the toughest outs in the middleweight division. The North Carolina native is on a three-fight winning streak. Brunson, 36, has lost only to current or former champions since 2016: Israel Adesanya, Robert Whittaker, Anderson Silva and Ronaldo “Jacare” Souza. Brunson is now tied with three others for the third-most finishes in UFC middleweight history with eight.

“[Brunson] looked awesome tonight. He came in against a young, up-and-coming savage that wanted to be the youngest champion ever,” White said. “And he did what he needed to do tonight. And it looked good.”

The 22-year-old Shahbazyan (11-1) had won all four of his UFC fights coming in, including the previous three via first-round finish. The California native had been considered one of the top blue-chippers on the UFC roster. Shahbazyan trains out of Glendale Fighting Club under coach Edmond Tarverdyan, the longtime mentor of Rousey. Shahbazyan, a protégé of both, is managed by Tarverdyan and Rousey.

White said he wasn’t disappointed with Shahbazyan’s performance, even as he suffered his first UFC setback.

“Everybody knew no matter what the odds said [that] he’s going in against an experienced f—ing guy,” White said. “Brunson has fought everybody — everybody. Shahbazyan hasn’t fought everybody. This is where you find out where a guy is at. You put him against Derek Brunson.”