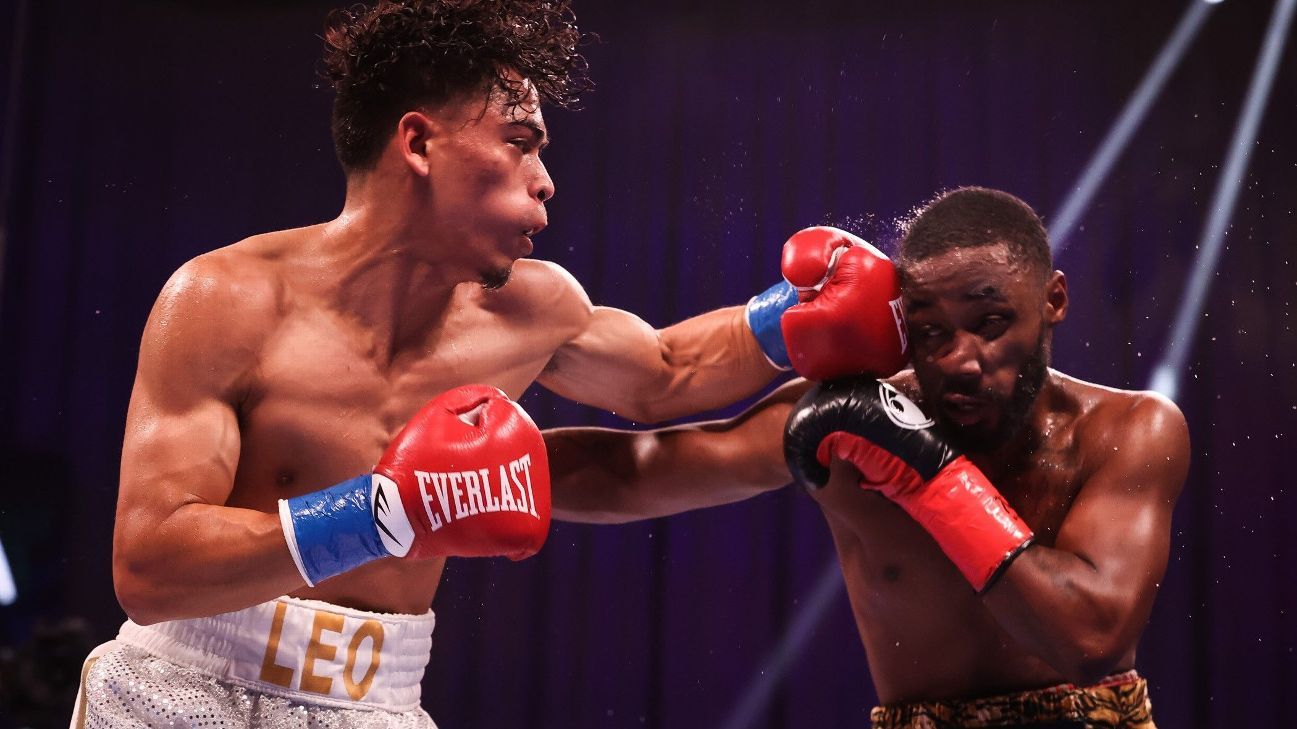 The return of former junior bantamweight champion Srisaket Sor Rungvisai, an all-British contest in Eddie Hearn’s Matchroom Boxing Fight Camp and the return of boxing on Showtime marked a Saturday full of interesting fights. Sor Rungvisai could be headed to a title fight once again after a unanimous decision victory and Ted Cheeseman revived his career after a three-fight losing streak.

Steve Kim and Nick Parkinson look at the key takeaways from the three fight cards.

Angelo Leo became another solid name at junior featherweight to contend with as he dominated Tramaine Williams in a 12-round unanimous decision victory that became more and more one-sided as the night went on. With the victory, Leo won the vacant WBO world title recently vacated by Emanuel Navarrete.

Even without Navarrete, who will now fight at featherweight, 122 pounds is still a pretty loaded division. Leo certainly showed that he belongs among the best junior featherweights, and showed his willingness to adapt as he was forced to face Williams on short notice instead of Stephen Fulton, who tested positive for COVID-19.

Most likely Leo will have to face Fulton next. Fulton will probably be a betting favorite as the fight comes up, but Leo showed with his mindset and conditioning that he’s a tough out for anyone in the division.

With his style, the 26-year-old Leo will be involved in good fights for years to come. — Steve Kim

We have a new candidate for knockout of the year with Joe George’s dramatic stoppage of Marcos Escudero in the opening bout on Showtime’s card from Mohegan Sun.

For much of the bout George was getting backed up and out-hustled, but out of nowhere a striking left uppercut hit Escudero on the chin and the fight was over. As Escudero tried to get up, he seemed frozen as the referee continued his count.

In the end this was the difference between George and Escudero, the ability to turn the fight around with one shot. While Escudero worked in volume, George was waiting for his opportunity, and made it count.

“I was setting him up with the jab to the body, I had him leaning over a little,” said George of the knockout. “I was shooting the right uppercut, some landed and some didn’t. I wanted him to get comfortable and relaxed, and that’s exactly what he did. He was relaxed and I slipped over and just shot it. He gave it to me and I had to take it. It put him down.”

It’s not clear how much better George, 31, can get. He has some athleticism, but he doesn’t seem to handle pressure fighters that well. However, on Saturday he showed some resiliency — and an eraser in that left hand. — Steve Kim

Eddie Hearn had good reason to be happy with his first show since March 7: the main event was brilliant. Hearn excitedly tweeted his approval in the aftermath of Ted Cheeseman’s unanimous decision win over English junior middleweight opponent Sam Eggington, calling the bout “One of the best fights I have ever seen live!”

One of the best fights I have ever seen live! #FightCamp

Cheeseman and Eggington certainly put it all on the line with some brutal exchanges. It was a fight that deserves a rematch, maybe in a future Fight Camp installment.

Hearn said that boxing would be in big trouble if events without fans like this do not attract television viewers. The event added a light show and a fireworks display before the main event at the garden of their office headquarters in Essex, England. But it is the matchups and the quality of the fights that ultimately brings the viewers, and generates news and interest. Cheeseman-Eggington, as well as others on the first five-bout show, delivered on that.

For Cheeseman, this was make-or-break and you have to applaud his heart and determination. There can be no questioning his appetite for boxing in the way he approached this fight, and battled through tough moments in Round 6. After two defeats and a draw, plus overcoming gambling addiction, Cheeseman has emerged from the COVID-19 lockdown a stronger and a better boxer. He boxed cleverly in the first half of the fight to put himself ahead on points, then bravely absorbed what Eggington fired back with from round six on.

“I was confident going into that ring,” said Cheeseman. “There was no pressure with no crowd. I made mistakes but I boxed really well. I could have thought: ‘It isn’t going my way.’ But I gave it my all. If I lost tonight, I would have retired. I could cry my eyes out with happiness.”

A rematch will be top of the list for both fighters. Eggington is only 26, and he can take encouragement from how he improved in the second half of the fight. Cheeseman will not be rushed, he still has business to be taken care of on the British and European scene before he can be considered a world title contender. — Nick Parkinson

At 23, Dalton Smith looks a real prospect and his knockout Saturday will catch the attention of a lot of fight fans. Smith seized his moment in the spotlight with a one-punch knockout of Nathan Bennett to bring his record to 6-0, 5 KOs, with a performance that underlined his potential to go box for the major titles one day.

The Sheffield lightweight knocked out Liverpool’s Bennett with a perfect right hand to the temple, nailing his opponent to the canvas.

Smith’s last fight was streamed live on Facebook, but this crushing finish was shown live on DAZN in the U.S. and Sky Sports in the U.K. It was a good opportunity to shine, and Smith took it.

Earlier in the bout, Smith showed his technical ability that saw him win a stack of amateur titles. He was part of the Team GB picked, but decided against going for the Olympics because of a change in weight. By the time the delayed Olympics takes place next year, expect Smith to be fighting for domestic and regional titles on a journey which is heading to the top. — Nick Parkinson

The weekend in boxing started in the early morning at the Workpoint Studio in Bang Phun, Thailand, where Srisaket Sor Rungvisai overcame a sluggish start to outpoint Amnat Ruenroeng by unanimous decision in a junior featherweight battle.

It wasn’t a sparkling performance from Sor Rungvisai, the former WBC junior bantamweight titlist. While he repeatedly marched forward and landed punches on Ruenroeng, Sor Rungvisai was consistently struck by clean up shots from Ruenroeng at the end of exchanges. While he came out victorious, it’s easy to wonder if this was just merely ring rust (first fight in 16 months), or a sign that at 33 years of age and 54 fights under his belt, Sor Rungvisai is now on a physical decline. He simply hasn’t looked like the guy that defeated Roman “Chocolatito” Gonzalez twice just three years ago.

After the fights Sor Rungvisai said he wants another crack at Juan Francisco Estrada, who took the WBC junior bantamweight belt from him in April 2019. He will need a better type of effort if he wants to have a chance of defeating Estrada in the rubber match. — Steve Kim

A new contender at 122 pounds?

Ra’eese Aleem served notice that he’s a real threat to any of the belt-holders at junior featherweight. Aleem showed a complete skillset as he impressively controlled Marcus Bates with his athleticism from the outside and his willingness to be aggressive inside — attacking the body with both hands.

This bout was an WBA eliminator at 122. Currently the WBA “super” champion is Murodjon Akhmadaliev, and Brandon Figueroa is the organization’s “regular” belt-holder. Rey Vargas has the WBC belt and the WBO title was vacant coming into the night as Emanuel Navarrete had moved up to featherweight.

Aleem has good size, above average speed, and can brawl when he has to. At 30, he is a physically mature fighter who is a tough opponent for anyone in the division.

With Aleem, Danny Roman, Carlos Castro, Stephen Fulton, Albert Pagara and Thomas Patrick Ward waiting for an opportunity, there is no shortage of quality contenders in the junior featherweight class. — Steve Kim