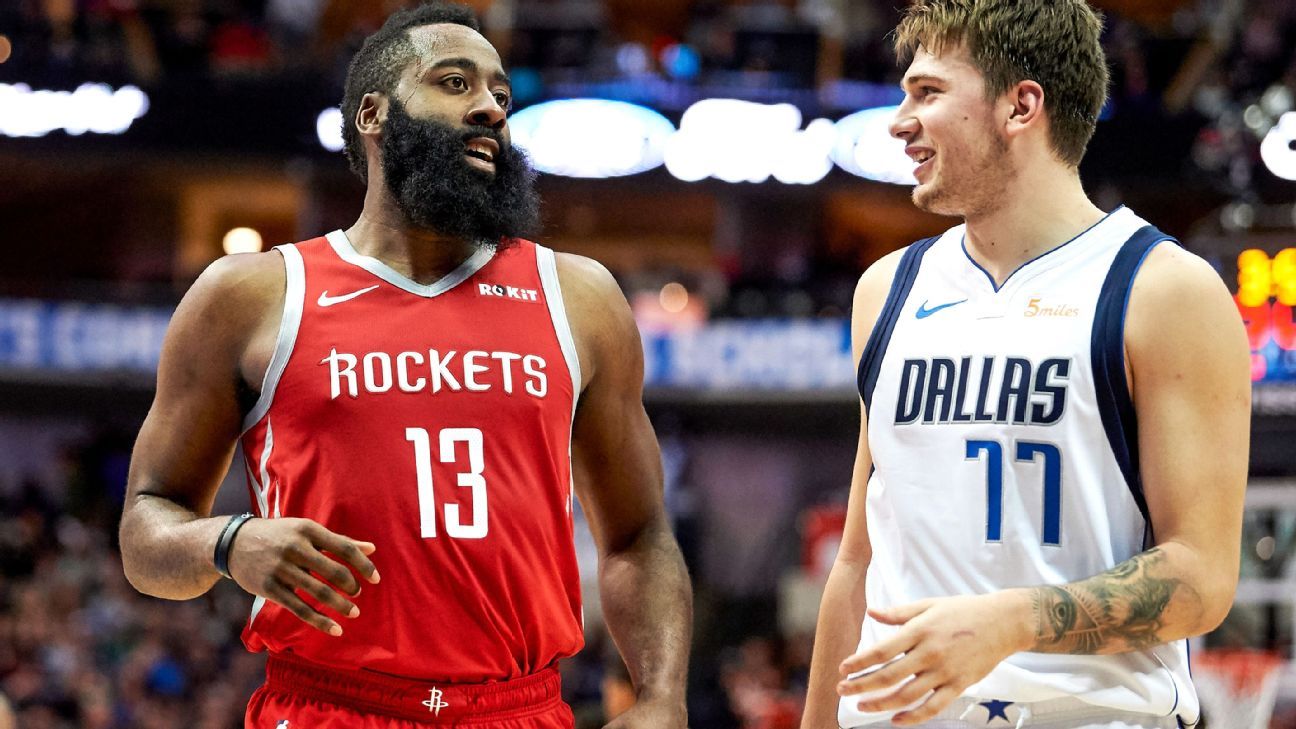 The pre-restart training camp Mike D’Antoni so eagerly anticipated for the Houston Rockets — a team remodeled midseason with a drastic shift in philosophy to microball — never really materialized. Due to late arrivals, including both of the team’s superstars, as well as Austin Rivers‘ excused exit and reentry, the Rockets never had their full roster available for a practice in the Walt Disney World campus outside Orlando, Florida.

Hey, at least Houston was healthy headed into its final scrimmage. Unfortunately, that didn’t last long, as Eric Gordon had to be helped off the court after he sprained his ankle in the first half Tuesday, an injury that could sideline the Rockets’ third-leading scorer for the entire eight-game seeding schedule.

“Everybody is saying two or three weeks,” D’Antoni said a day later. “The ankle will tell you when he’s ready.”

The Dallas Mavericks are familiar with that feeling. Luka Doncic‘s historically productive sophomore season was twice interrupted by sprains of his right ankle, which needed several weeks of rest to fully recover. That was the silver lining of the NBA’s pandemic-caused suspension for the Mavs.

Doncic, who had also been nursing a sprained left thumb and sprained right wrist before the hiatus, arrived in Florida with a clean bill of health and fresh legs. He has that bit of extra burst back, as he did early in the season, when he looked like a legitimate MVP candidate (averaging 30.4 points, 9.9 rebounds and 9.3 assists in 24 games before his first ankle sprain).

A healthy Doncic, now surrounded by four 3-point shooters with Seth Curry solidifying his spot in the starting lineup, makes Dallas a dangerous team. Especially if the Mavs can climb upward out of the Western Conference’s No. 7 seed, which probably would mean avoiding a quarterfinals matchup with the LA Clippers.

One of the teams directly above Dallas in the standings? The Rockets.

That puts a little extra oomph on the restart opener for the Interstate 45 rivals. As much as the Rockets want to treat the seeding schedule as tune-up time, slipping to seventh could have serious consequences. — Tim MacMahon

Here’s the latest on the standings, the games to watch Friday and Saturday, plus everything you need to know. Check back here for highlights and updates throughout the day.

After he hadn’t played all season, Jamal Crawford was signed by the Brooklyn Nets as a replacement player for the seeding games. However, Crawford didn’t play in any of the Nets three scrimmages and was declared out for conditioning purposes on the team’s injury report heading into Friday’s game against the Orlando Magic. Crawford last played in the NBA on April 9, 2019 when he scored 51 points for the Phoenix Suns in a loss to the Dallas Mavericks — a game more notably remembered as the home finale for Dirk Nowitzki.

Jamal Crawford is unguardable beyond the 3-point line as he torches Nets teammate Rodions Kurucs in practice.

The Bucks enter the restart 6.5 games up on the Raptors for the top seed in the East, meaning Milwaukee doesn’t have much to play for. Still, these next eight games will give Mike Budenholzer’s squad a chance to warm up for the playoffs. It’s hard to remember now, but the Bucks went into the hiatus in something of a slump, having lost four of five games to fall off a 70-win pace. But Giannis Antetokounmpo was banged up then. The reigning and likely repeat MVP is healthy and ready to go.

The Rockets’ small-ball experiment remains one of the most fascinating storylines to watch in the bubble. Houston has only two players taller than 6-foot-8 on its roster and those two — Tyson Chandler and Bruno Caboclo — have combined to play only 31 games for the Rockets this season. Houston saw some early success with its small lineup but had lost four of five before the season was suspended. Two of those losses came without Eric Gordon, who could miss the next two weeks after spraining his ankle in the Rockets’ final scrimmage.

The non-ESPN games on Friday all feature teams playing for their playoff lives. The Orlando Magic and Brooklyn Nets would be the last seeds in the East if the playoffs started today. The Washington Wizards are chasing them, but need to make up 1.5 games to force a play-in. The Phoenix Suns need to make up 2.5 games in the West. Both the Sacramento Kings and San Antonio Spurs are on the outside looking in as they face each other Friday. And the Portland Trail Blazers get the first crack at the current 8-seed in the West, the Memphis Grizzlies.

The game that started, and really, stopped, it all. After a four-month delay, the Thunder and Jazz finally play. When we left off, this game was about to be for the current 4-seed in the Western Conference. And it maintains those big implications as both teams are firmly in the mix for a top-four seed. It’s an important game — for a lot of reasons.

Both teams are 0-1 in the bubble, and in both cases lost tight, toss-up games. The Pelicans looked excellent, even with Zion Williamson‘s minute restriction — for about 3 ½ quarters. The Clippers did the same thing, except they just couldn’t find enough offense down the stretch. The Pelicans are more desperate than the Clippers here to get their first restart win, though, because there aren’t many chances available.

After beating the Clippers on opening night, the Lakers get the defending champs in another high-level matchup. There’s a lot of talk about how the already-great chemistry of the Raptors has only strengthened in the bubble, and while they’re an Eastern Conference threat, they’re still seen as somewhat of a dark horse. There’s an opportunity to make a strong statement here against the presumed title favorite.

The best and biggest moments from the NBA’s thrilling return

From player protests to renewed rivalries, our NBA experts react to the first night of restart action.

What Jusuf Nurkic gained from losing a year to injury

A horrific leg injury sidelined the Trail Blazers center for 16 months, but he says he believes the time away made him a better player — and person.

The NBA bubble is a grand experiment in epidemiology

We’ll see how technology, policy and human behavior influence an epidemic — and what we can do to stop it.