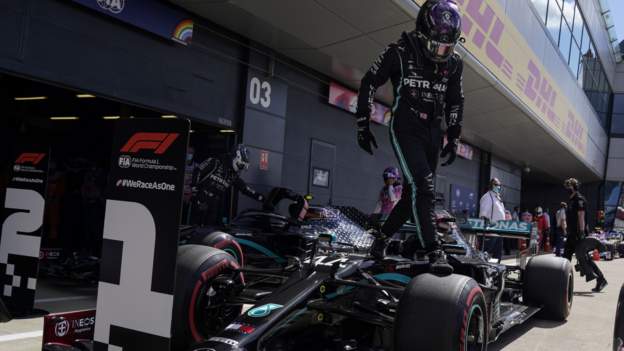 Even Lewis Hamilton’s team-mate was impressed by the world champion’s pole position lap at the British Grand Prix on Saturday.

Valtteri Bottas described Hamilton’s performance as “a perfect lap – or at least nearly perfection; it was a pretty impressive time”.

It was all the more impressive as it came after Hamilton had appeared to be behind Bottas until the final session, and had had a most uncharacteristic spin in the second part of qualifying, which meant a “fresh reset mentally”.

Hamilton is really beginning to build up some momentum in this delayed, truncated, almost surreal coronavirus F1 season.

After a sticky start at the first race, Hamilton has won the past two and this was his third consecutive pole. It puts him in a perfect position to extend the championship lead he took for the first time in Hungary a fortnight ago.

A victory on Sunday would be his seventh at his home race, but if it happens – and he is a strong favourite – he will not be carried along by the 140,000 fans who normally cheer his every move at Silverstone.

The vast expanses of the old airfield track are empty this year, the spectators forced to stay away. It has created an odd, lifeless atmosphere at this usually vibrant race, and Hamilton is feeling it.

“I’m missing the fans,” he said. “There are the greatest grandstands around here. It’s the weirdest time. I wake up every day and it’s like Groundhog Day with this whole Covid experience.

“When I approach this weekend normally, I have a much different feeling. It is excitement and nerves knowing how many people come, and that nervousness is just really through wanting to excel and deliver for everyone because you have been on an incredible journey together.

“I tried to keep that in mind still this weekend while I didn’t have the same feeling knowing no-one would be here. I really just tried to remember and reminisce on the past few years and try to somehow get that energy and utilise it, which is not that easy.

“I can’t imagine how many people are watching and if it’s the same energy-wise back home where they are as it is when they’re at the track. But I hope this gives some people some positives.”

Hamilton’s time of one minute 24.303 seconds was not only the fastest ever lap of the new layout of Silverstone introduced in 2010, it was also 0.313 seconds quicker than Bottas – which meant it was in a different dimension from any other car in the field, because that’s what the Mercedes is this year.

Mercedes have built a wonderful car, but they are being flattered in 2020 by the fact their usual rivals Red Bull and Ferrari have stalled or even gone backwards over the winter, Ferrari because their engine has lost power after a series of rule clarifications, and Red Bull because their chassis has been plagued by aerodynamic inconsistency.

Max Verstappen said the car had improved its behaviour after updates this weekend. But not only was he still 1.022secs off Hamilton’s time, he was also 0.049secs slower than the Dutchman’s own qualifying time at Silverstone last year. And this was not the first time this season Red Bull have failed even to match their own pace from 2019.

This offset has meant Mercedes are untouchable and while Verstappen pledged to “try to keep a bit of pressure on them” in the race, his team boss Christian Horner has already pointed out that Mercedes seem to “only match their pace to the cars that are behind. I still think they have quite a lot in hand”.

The likelihood is this will be a private battle between Hamilton and Bottas. The Finn knows he needs to keep Hamilton in sight if his title hopes are not to fade quickly and he says he will “try everything” to beat him.

But after a pole lap like that, this is Hamilton’s race to lose.

The British Grand Prix weekend started with the nasty shock of the first F1 driver positive test for coronavirus.

Racing Point’s Sergio Perez has had to miss this race after catching the virus at some point over the week and a half between leaving Hungary and arriving at Silverstone. In which period he flew home – somewhat unwisely in many eyes – to Mexico, one of the world’s coronavirus hotspots, to see his mother, who had been in hospital after an accident.

Perez’s substitute is his former team-mate Nico Hulkenberg, who slipped out of F1 last year after being dropped by Renault. And the German did a predictably solid job.

Hulkenberg’s 12th place on the grid with team-mate Lance Stroll in sixth is not a fair reflection on his performance, because he missed out on a place in the top 10 shoot-out when he was just 0.065secs slower than Stroll in second qualifying.

Racing Point have so far confirmed Hulkenberg only for this race. But it is effectively certain that he will continue for at least next weekend’s 70th Anniversary Grand Prix, back at Silverstone, even if the team are hanging onto a technicality in the hope that Perez might return.

Racing Point team principal Otmar Szafnauer has said Perez’s first test was on Wednesday, and at that point the requirement for people testing positive in the UK was to isolate only for seven days – which would make him available for the next race if he tests negative this coming week.

The advice changed on Thursday – when Perez had his second and confirmatory positive test – to 10 days’ isolation, which would automatically put him out of the next race.

Therefore, they are arguing, in the eyes of the UK public health authorities, Perez was positive for Covid-19 on Wednesday, so the seven-day isolation applies.

But this seems a forlorn hope – even if Perez tests negative by next Thursday – because the FIA and F1 do not agree.

They are following the guidelines of host countries strictly – that is part of the deal the sport has to allow these races to happen, and for participants to travel between nations with exemptions in some cases that do not apply to the general public.

So, BBC Sport has been told, F1 and the FIA will demand a 10-day quarantine. Which would mean Perez is out for next weekend, too, and Hulkenberg has another chance to remind people that, as Verstappen said on Saturday, “he should be here because he still deserves a spot on the grid”.