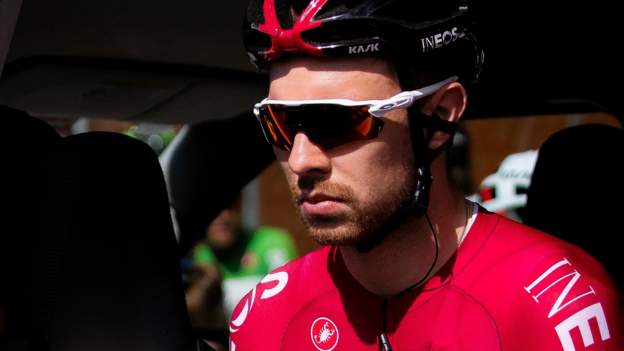 Doull, 27, is riding the one-day Strade Bianche in Tuscany on Saturday.

The 184km (144-mile) race was due to be held in March but was cancelled because of the coronavirus outbreak.

Doull – who won Olympic gold on the track in the men’s team pursuit in 2016 – is preparing for an unusual resumption of the sport.

“Everything from the sign-ons with people having to take their own pens, wiping down, hand sanitiser everywhere, face masks, temperature checks on the podium.

Every rider in Tuscany will be tested twice before the men’s and women’s World Tour races.

Spectator numbers will be limited in the start and finish areas and they are encouraged to wear masks.

“Normally this race is lined with fans along these gravel roads,” continued Doull. “That’s one of the nice things about cycling – that kind of noise and atmosphere, you can feed off the crowd.

“So to have that gone is going to be very different. But the main thing is racing starts again and we can get something out of this year.”

It was a year that started so promisingly for the Welshman.

After making his Grand Tour debut at the 2019 Vuelta a Espana, he began 2020 with a win at Aix-en-Provence.

He was preparing for the traditional Spring Classics before the coronavirus outbreak brought the season to an abrupt halt.

Rather than racing around Europe, he was back home in Cardiff. A few ‘easy spins’ with his dad was all the company he could have on the roads.

But in July he was able to take part in a training camp in the Pyrenees as part of a Team Ineos ‘bubble’ – which he has remained in ever since.

“If this was a normal time of year and I had a two-week training camp and then I had one week until I was racing, I’d fly home for four or five days,” Doull explained.

“Instead I drove from the Pyrenees to Nice with my coach and another rider from the same bubble. We filled the car before we left, didn’t stop at all.

“We came down to the team house in Nice which is again only team-mates in there – everyone’s been tested, everyone’s part of the bubble.

“Then we drove from Nice to Tuscany for this race and then we’ll go straight from here to Poland [where Doull races next].”

Strict hygiene measures are not unusual for an elite athlete who wants to avoid picking up an illness. Doull has never been far away from a bottle of hand sanitiser since he first joined the British Cycling programme when he was 18.

The new protocols are a small price to pay for the chance to race again. Doull is even keeping that in perspective.

“It’s the smallest thing in the greater scheme of things. It’s really insignificant,” he said.

“I’m very grateful we can be back racing, as long as it’s safe and all the measures are in place.

“It would’ve been nice to have a good Classics, try to do the Giro [d’Italia] then various other races. But at the end of the day, it’s a tiny thing.