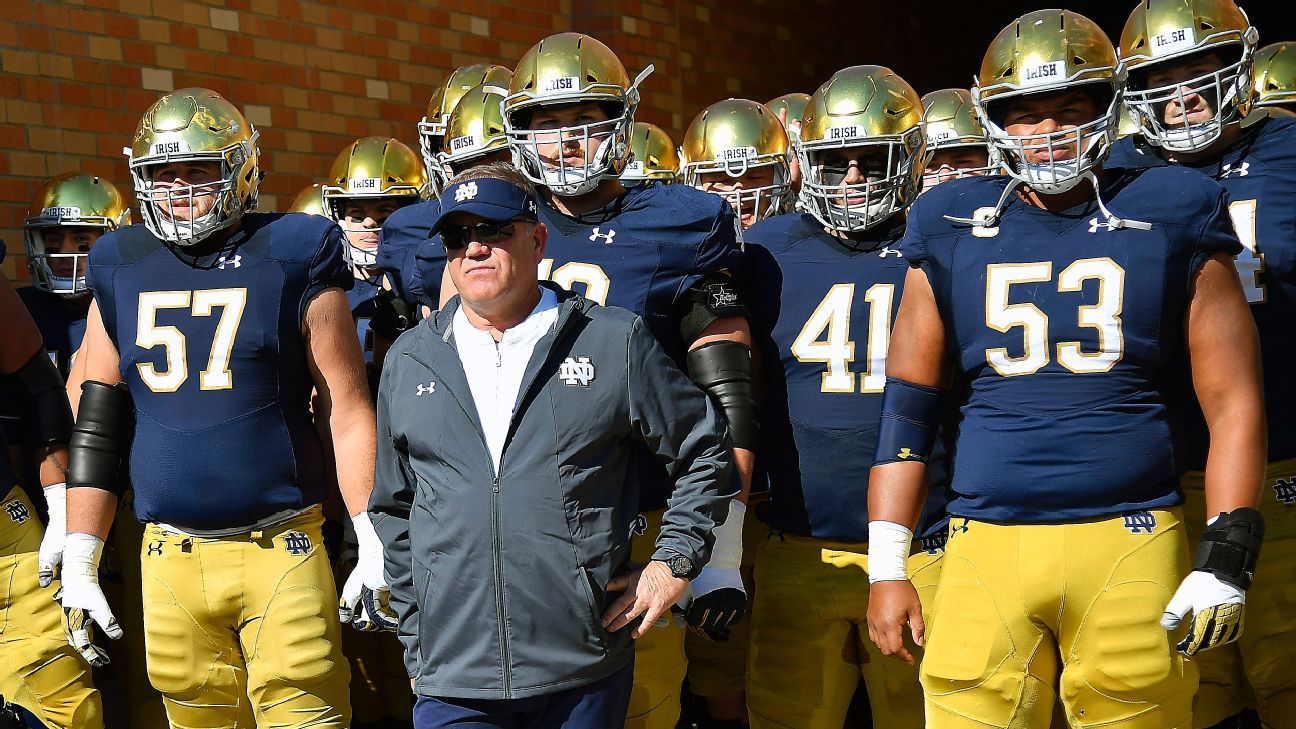 The ACC made its scheduling decision on Wednesday, opting for 10 conference games — including Notre Dame — and one nonconference game. That leaves the SEC and Big 12 as the only leagues that have not made an announcement about what they plan to do about scheduling. Even though we have a few more answers now, many questions remain.

Here are the most pressing ones surrounding the college football season.

So Notre Dame can win the ACC now?

Yes! Everyone who has hollered and screamed for Notre Dame to join a conference finally gets to see how it plays out — even if it is for this season only. Notre Dame plays all its other sports in the ACC and already had a scheduling partnership with the league, so it made sense to play a full ACC schedule for 2020 for both the league and the Irish. There will be no divisions for this year, so the two teams with the highest winning percentage in league play will meet up in the ACC championship game. Notre Dame picks up Florida State, North Carolina, Syracuse and Boston College and already had Clemson and Louisville scheduled — giving the Irish the top 3 projected teams in the league for 2020. But this also sets up to potentially get a Clemson-Notre Dame rematch in Charlotte, North Carolina.

What else do we need to know about the decision?

No. 1: This decision does not mean we will actually get an ACC season that starts the weekend of Sept. 12. All of this is subject to change, depending on whether public health guidance allows it. No. 2: The fate of nonconference games remains unclear, as those contests were not announced as part of the scheduling model. Because schools will be required to play those games in their home states, big marquee matchups like Auburn-North Carolina and Virginia-Georgia in Atlanta would be off the table, in addition to possibly Notre Dame at Navy. Because the SEC still has not made a decision on its scheduling model, the SEC/ACC rivalry games between Florida-Florida State, Georgia-Georgia Tech, South Carolina-Clemson and Louisville-Kentucky remain unknown. All eight schools want to play, but if the SEC goes to a conference-only model, that will not happen.

Where do the SEC and Big 12 stand now?

The SEC is up next, as the presidents have a previously scheduled video conference on Thursday. SEC commissioner Greg Sankey declined to speculate, saying in a prepared statement, “We continue our discussions focused on the return of fall sports, including football. We will announce any decisions at the appropriate time.”

The Big 12 will be watching and waiting on the SEC like everyone else, but the Big 12 presidents don’t meet until Monday. Big 12 commissioner Bob Bowlsby told ESPN the conference’s athletic directors will present about four or five different scheduling models for the presidents to consider when they meet Monday.

“We’re going to arm them with all of the information they need to make a decision if that is their wish,” Bowlsby said.

The Big 12 subcommittee that was formed to discuss the return of fall sports had a meeting Wednesday night, and the conference football coaches will have an opportunity to weigh in Thursday. Bowlsby said he’s also watching for the possibility of an announcement from the SEC over the next few days.

“We’ve been collaborating, but also operating independently,” Bowlsby said of the Power 5 commissioners. “It was never our intent to have identical outcomes, I just think we have all applied similar processes and will get to a similar location when it’s all said and done.”

How likely is a spring season at this point?

More likely than a couple of weeks ago, but it’s still viewed as a last resort by many. A spring season raises a new batch of questions regarding player safety — can they physically handle two seasons, even shortened ones, in one calendar year? — the NFL draft and uncertainty about the state of the virus and a vaccine by the new year.

Spring football is an option, Duke coach David Cutcliffe said on Friday, “when it’s the only option left,” echoing sentiments by Penn State AD Sandy Barbour and Bowlsby, who both called it a “last resort.”

“We don’t have much of an appetite for spring football … we’re not confident that spring football, if we don’t play in the fall, will even happen,” he said. “Especially if there’s no vaccine. And we’re not really sure that it’s not going to compromise part of the 2021 season if you’re playing in the spring. Also, if you have to practice in the middle of the winter to get ready for your spring football, you’re practicing indoors, are you going to spread the virus more easily in that scenario? These are rational questions that have to be answered.”

Not everyone is so skeptical, though.

“I think the people who say it’s not [an option], in my opinion, just don’t want to think about it,” Oklahoma coach Lincoln Riley said earlier this month. “I just think it would be wrong of us to take any potential option off the table right now. I think it’d be very difficult to say the spring is not a potential option. I, for one, think it’s very doable. …

“It’d probably be a conference season and postseason only. We’ve seen often teams go in and play well into January in the College Football Playoff and start spring practice at some point in February, and nobody says a word about that. You’d have to give players plenty of time off to get their bodies back in the summer. Maybe a little later start back the next fall.”

What about other teams scheduled to play the ACC, Big Ten or Pac-12 in nonconference?
To be determined. After the Big Ten and Pac-12 announcements, conferences and teams affected put out statements that were similar to this one from Mountain West commissioner Craig Thompson:

“We were aware of this possibility and will continue to evaluate the appropriate decisions and the proper timing going forward. The safety, health, and wellness of our student-athletes, coaches, staff members and campuses remain our top priority.”

After Alabama’s showcase opener against USC was canceled, Crimson Tide AD Greg Byrne said “we will do our best to adjust.”

Adam Rittenberg breaks down the process that determined the Pac-12’s ultimate decision to go with conference games only for its fall schedule.

Speaking of marquee games, which high-profile ones have been canceled so far?

Oregon has lost two fascinating ones, first with FCS power North Dakota State and its NFL draft darling QB Trey Lance. Then the Ducks were slated to host Ohio State in Week 2.

USC loses games with Alabama and Notre Dame, and the Irish also will miss playing Wisconsin at Lambeau Field in Green Bay. Jim Harbaugh and Michigan were scheduled to open the season at Washington, and the Utah-BYU rivalry game is also off for the year. BYU could lose as many as six games off of its schedule if the rest of the Power 5 leagues follow suit.

What will the season look like for the Pac-12 and Big Ten?

One of the reasons the conference decided to push back the start of the football season was a concern that UCLA and USC would not be ready to play in early September because of coronavirus cases in the Los Angeles area, sources told ESPN.

Big Ten officials, meanwhile, are still considering the possibility of moving its division games to the front of the schedule, in case the season is interrupted by the coronavirus. That way, it might still be able to determine a championship through division winning percentage in spite of an incomplete season.

“I’m hopeful that that’s where we end up next week in locking that down,” he said. “We’ve talked about that, and that’s our preference.”

“We have not delved deep into those details yet,” Smith added. “I anticipate next week we’ll get into the details of how our schedules will work.”

Smith also said if teams are able to play in September but something happens later in the month or in October, “we can hit the pause button and provide a window of opportunity for our student-athletes not to be put at risk. We can move games. … There’s a flexibility, I can’t say that enough, that’s significant.”

Get used to it. If there is going to be a season this year, every option needs to be on the table.

What does this mean for the College Football Playoff and bowl games?

College Football Playoff executive director Bill Hancock has steadfastly said the CFP “will be ready for whatever comes down,” without going into further details on what that could mean for the way the selection committee evaluates teams or whether it is feasible to push the entire playoff back should there be significant delays to the season. Schedule evaluation is always a critical component, and so are marquee nonconference games.

Now that the Pac-12 and Big Ten and ACC are going conference-only, how does that evaluation change? The ACC, with Notre Dame playing a full slate of conference games with the league for this season only, will play an 11-game schedule which includes one nonconference game. If the Big 12 and SEC also go with models that allow them to play a nonconference game, does that give them an advantage in the all-important strength of schedule factor?

“This is why the committee has 13 football experts,” Hancock told ESPN earlier this month. “Their task is to select the best four teams based on play on the field and schedules that conferences establish.”

Indeed, the conference commissioners and Jack Swarbrick set the playoff protocol and will more than likely determine the number of games that need to be played to qualify for the four-team playoff once all leagues come up with scheduling models. But even then, we might not have an answer to this question until we are in season — What if the teams in the hunt for the playoff have played a different number of games because of cancellations due to the virus?

As for the games themselves, they remain on as scheduled, including the national championship game in Miami on Jan.11. But as Chick-Fil-A Peach Bowl CEO Gary Stokan said, “We’re adaptable as well. If we need to push back and I think Bill has said this, if they need to push back the championship game, they and Florida have had those conversations, and they remain flexible to do that as well.”