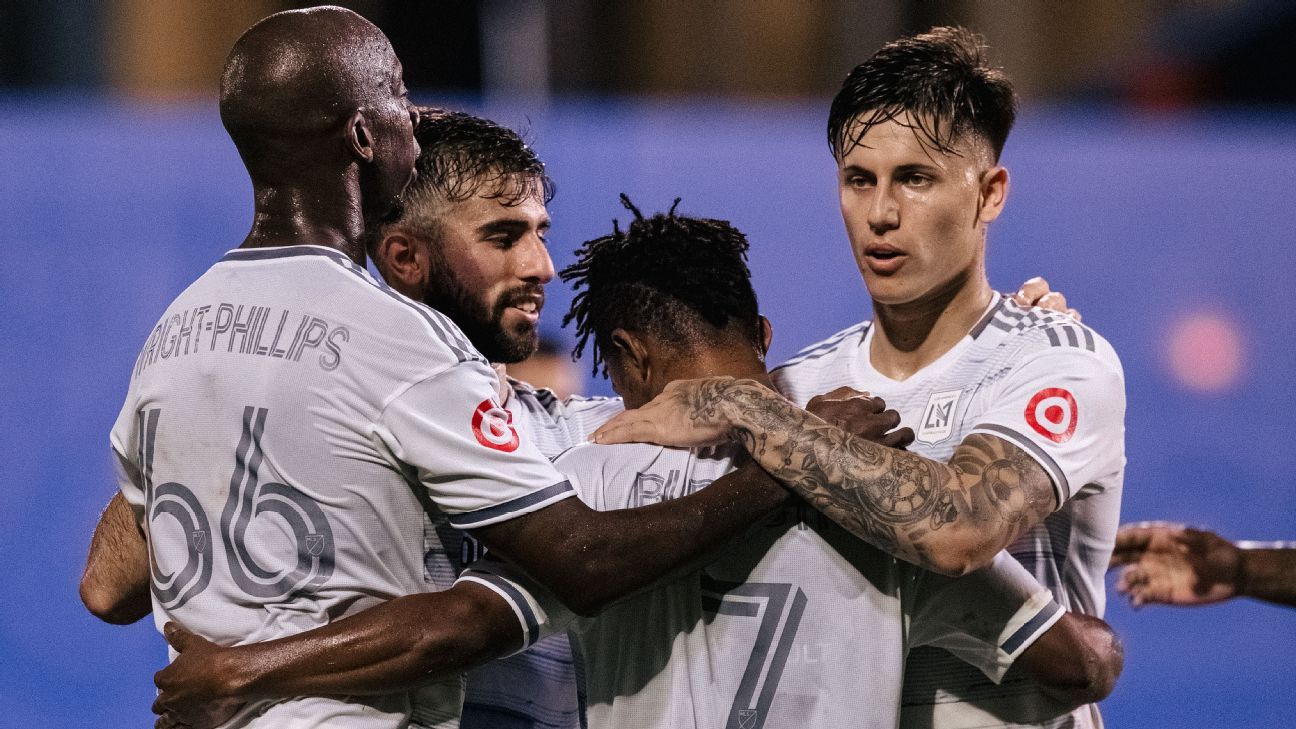 And then there were eight. Both of last season’s MLS Cup finalists, Toronto FC and winners Seattle Sounders, were knocked out in the MLS is Back Tournament’s round of 16, leaving a diverse field of quarterfinalists comprised of clubs vying for the Supporters’ Shield, along with one or two surprise packages for some added drama.

With just six matches remaining before the final on Aug. 11 (8 p.m. ET, stream live on ESPN), we look ahead to the quarterfinal matchups on Thursday, Friday and Saturday to tell the story of how they made it this far, and whether they’ll be able to continue their journey in Orlando.

For the first time all tournament, Philadelphia controlled the pace of play in their knockout-round win over New England, but its opponents created more shots and more shots on target — something that’s emerged as a theme from the Union’s play in Central Florida.

Jim Curtin’s side has ground out results throughout the competition, drawing one match and winning the other three by single-goal margins. But what Philly lacks in gaudy attacking figures it makes up for in depth of scoring, with all five goals scored by five different players — including just one by forward Kacper Przybylko, and none from 19-year-old rising star Brenden Aaronson.

Sporting Kansas City have scored six goals in four matches in Orlando, but dig a little deeper and the numbers suggest an attack that is limping mightily. One of those goals came from the penalty spot, another two were scored in the 86th minute or later against opponents desperately chasing a result, and in the round of 16, they were shut out and taken to penalties by Vancouver — a team that had conceded seven goals entering the contest. Alan Pulido was (expensively) brought in to alleviate SKC’s scoring woes from a year ago, but he hasn’t struck from open play yet in this tournament.

Both these clubs have kept it relatively tight at the back in Central Florida, and with both struggling to find the back of the net heading into Thursday’s match, this has the makings of a hard-fought battle that will be determined by the plans and in-game adjustments of the league’s longest-serving manager, Peter Vermes, and one of its brightest young tacticians, Curtin.

Who will take home the #MLSisBack Tournament title? 🏆 pic.twitter.com/z5SQhsvNUO

Orlando’s narrow 1-0 knockout-round win over an organized Montreal side perhaps gave little reason for optimism in the remainder of the tournament, but consider how effective it was in the group-stage win over NYCFC, who dictated the tempo and controlled possession.

The Lions were exquisite on the counter-attack, with the work rate and pace of Chris Mueller particularly effective in that match. That will be their blueprint for success against Los Angeles, who averaged 64% of the ball in the group stage, giving the MLS is Back hosts a pristine opportunity for a famous upset.

Of course, that blueprint will be worth no more than the paper it’s printed on if LAFC alter their game plan, like they did in a 4-1 round-of-16 win over defending MLS Cup champions Seattle Sounders. Last year’s Supporters’ Shield winners wreaked havoc in transition, finding countless opportunities against a Seattle defense that routinely found itself scrambling to get organized following turnovers. LAFC have scored 15 goals in four matches, with seven of those coming from Diego Rossi, who’s proven more than capable of picking up the slack left by the absent Carlos Vela.

Bob Bradley demonstrated against the Sounders that his side have an effective Plan B to call upon when necessary, and against an Orlando team that poses such a threat on the counter, he may have to turn to such quick-strike tactics again.

San Jose has out-possessed and out-chanced its opponents in each of the four games it’s played at MLS is Back, outscoring them 11-5 in the process. Chris Wondolowski has been the Quakes’ leading scorer in Orlando with three goals in just an hour’s worth of action spread across four games.

At the other end of the pitch, the Earthquakes have even found the stamina to execute Matias Almeyda’s man-marking system in the heat and humidity of Central Florida, limiting opponents to just two goals in the past 211 minutes of action and keeping a clean sheet in their opener against Seattle. Of course, in between those two stretches, San Jose conceded three times in the space of 52 minutes.

Minnesota manager Adrian Heath took every opportunity to remind anyone who would listen that the whole world had counted the Loons out of their round-of-16 confrontation with Columbus long before it began, and while we did pick the Crew to advance, the characterization of an unbeaten-in-2020, third-placed team in the Supporters’ Shield standing as a David matching up against Goliath misses the mark by some margin.

For the third time in four matches in Orlando, Minnesota was out-possessed and out-shot against Columbus, and for the third time this tournament it got to the end of 90 minutes with the score tied, but Heath’s side kept Columbus’s silky attack at arm’s length as only a Gyasi Zardes penalty kept Tyler Miller from recording a clean sheet. Not to worry, though: five clinical penalties in the shootout booked their ticket to the quarterfinals.

This quarterfinal matchup pits the most unpredictable team of this tournament against the most predictable. San Jose has oscillated between benign and brilliant, but its quick-strike capability has made it perhaps the neutral fans’ favorite in Orlando. Minnesota, meanwhile, has quietly cemented itself as one of the best organized and most defensively sound outfits in the league. Its composure at the back could spell trouble for the Quakes, but the Loons will need more from Luis Amarilla and the rest of the attack if they’re to move on instead.

Where was this New York City FC side in the group stage? Averaging nearly 57% of possession, they scored just twice in their three matches before the knockout-round contest vs. Toronto. Against the reigning Eastern Conference champions, though, NYCFC saw just 44% of the ball but struck three times in an emphatic upset of the Reds.

Maxi Moralez was only fit enough to go 54 minutes against Toronto, but he still managed to assist on one goal and score one of his own. He’s proven to be the straw that stirs NYCFC’s drink in his three-plus seasons in the Bronx, and City and their young attackers will go as far as Moralez’s playmaking can carry them.

Portland found opportunities limited against a compact and well-organized Cincinnati side in the round of 16, requiring penalties to move past the second-year club, but there were silver linings in a frustrating 90 minutes. Alongside Jeremy Ebobisse, Jaroslaw Niezgoda has scored in each of the Timbers’ past two matches, demonstrating that Giovanni Savarese has no shortage of options up front to complement the creativity of Diego Valeri and Sebastian Blanco. And against more willing opponents, there will be opportunities aplenty for Portland’s attacking threats.

NYCFC just happens to be one of those more willing opponents. While they were clinical in their counter-attacking play against Toronto, they won the possession battle in every group-stage match they played — often by a wide margin — creating the sort of opportunities in transition that Blanco in particular can feast on. But, just as Toronto learned, NYCFC have incredibly sharp attacking threats of their own, and if a Portland defense that has looked vulnerable throughout isn’t hyper focused, they too could find themselves upset by a club that got out of its group by the skin of its teeth.