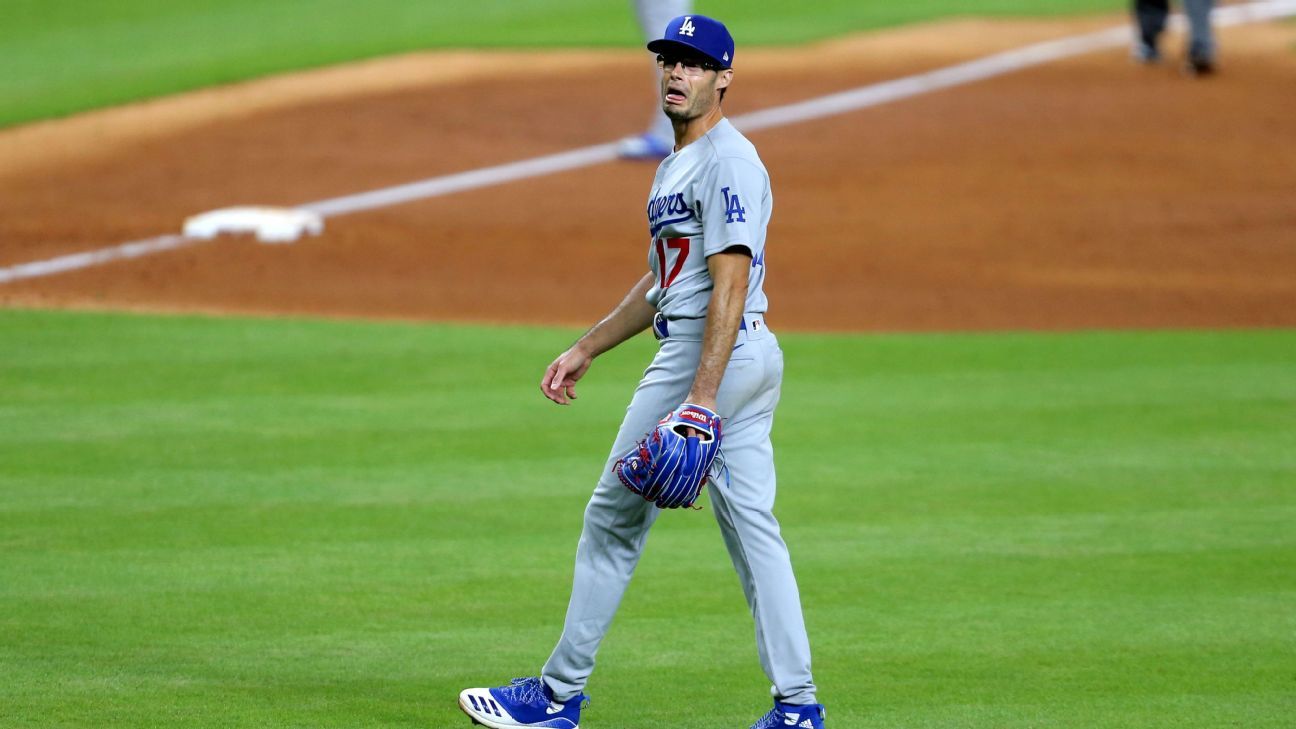 Back in spring training, when the sign-stealing revelations were new and the wounds were fresh, Los Angeles Dodgers starting pitcher Alex Wood made a prophetic point when considering the possibility of retaliating against Houston Astros hitters this season.

“Somebody will take it into their own hands,” Wood said, “and they’ll get suspended more than any of those guys got for the biggest cheating scandal in 100 years.”

Five months later, after an unfathomable set of circumstances forced the Dodgers to face the Astros inside an empty Minute Maid Park in Houston, Wood’s teammate became a victim of the cruel irony triggered by Major League Baseball’s decision to grant immunity to the principal culprits in the sign-stealing scandal.

Joe Kelly was suspended eight games for his actions in Tuesday’s game, even though he didn’t hit anybody — with a fist or a baseball — and was never ejected. The penalty seems tremendously stiff when measured against the context of a 60-game season. Eight games is more than 13% of that and the equivalent of a 22-game suspension in a 162-game season.

Over the past 10 years, no player has received a suspension longer than 20 games for a violation that wasn’t tied to performance-enhancing drugs, recreational drugs, substance abuse, domestic violence or, in the case of Juan Carlos Oviedo, identity fraud.

In punishing Kelly, MLB referenced the 3-0, 96 mph fastball behind the head of Alex Bregman (Astros manager Dusty Baker was certain it was intentional) and the taunts toward Carlos Correa (Baker said Kelly yelled, “Nice swing, b—-“). MLB also referenced prior suspensions for “intentional throwing,” specifically an incident in April 2018, when Kelly was suspended six games for plunking and fighting New York Yankees infielder Tyler Austin. Put another way: Kelly got two fewer games then — in a season nearly three times longer — for an incident that triggered far more violence.

Dodgers pitcher Joe Kelly dusts Alex Bregman off the plate, and after Kelly strikes out Carlos Correa, the two exchange words as the Astros’ and Dodgers’ benches clear.

Another major reason wasn’t cited in MLB’s release but was obvious to practically everyone. It was about what Kelly’s actions led to: players from both teams spilling onto the field, congregating en masse, some without masks, just one day after the Miami Marlins experienced a COVID-19 outbreak that spider-webbed into a logistical nightmare for as many as five teams.

Dodgers manager Dave Roberts, who was suspended for one game and served it immediately, spoke with league officials Wednesday morning and said they “weren’t pleased” that the strict protocols of their 100-plus-page operations manual were basically ignored because of adrenaline.

“We’re under a microscope,” Roberts said, “which we should be.”

The biggest source of the Dodgers’ public anger toward the Astros — aside from the overarching feeling of having been cheated out of the 2017 World Series — was the lack of punishment of players for what was clearly a player-driven scheme. MLB commissioner Rob Manfred explained that he needed to offer immunity in exchange for open, honest testimony and that punishments would be too difficult to dole out for transgressions that took place within the secrecy of a clubhouse.

But Dodgers players — and countless others around the league — were miffed by the unfairness in a larger context.

That one of their most important bullpen pieces was hit with such a severe punishment for — allegedly — reacting to a baseball crime that several others believe to be “worse than steroids” probably only exacerbated the Dodgers’ anger.

Kelly, however, is suddenly a folk hero in L.A. after being maligned last season for the same erratic pitching that sparked all this. A popular fan group, Dodgers Nation, has already printed T-shirts celebrating Kelly’s facial contortions. The Fox Theater in Bakersfield, California, wrote “Thank You Joe Kelly” on its marquee. Players such as Los Angeles Angels reliever Keynan Middleton and New York Mets starter Marcus Stroman voiced their support on social media, providing further evidence that the rest of the league still views the Astros with resentment.

Kelly informed the league Wednesday afternoon that he will appeal his suspension, but he wasn’t needed later that night. Eight other relievers combined to allow one unearned run over the course of 9 2/3 innings, giving the Dodgers a sweep in the two-game series.

Edwin Rios, the rookie corner infielder who provided the winning hit with a 13th-inning home run, was asked if he sensed added intensity from his teammates in this series.