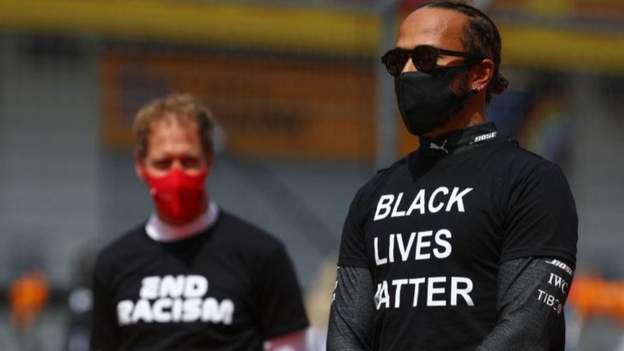 Leading Formula 1 drivers say they believe they should continue with their pre-race anti-racism demonstrations throughout the year.

Ferrari’s Sebastian Vettel and Charles Leclerc and Red Bull’s Max Verstappen are among those who have joined Lewis Hamilton in supporting that plan.

Leclerc said: “We should definitely keep fighting on that because it is not going to be solved overnight.

“It is crazy we have this kind of inequality all over the world in 2020.”

Four-time champion Vettel added: “The main reason for being here is to perform, but we cannot ignore what is happening outside our racing bubble.

“And the fight against racism around the world that has taken off in the last couple of weeks and months is completely justified because this is not fought and over, or dealt with overnight.

“It’s an ongoing process and it needs all of us, all human beings around the planet, to stand up and try and go against racism, inequality and injustice in any form.

“And therefore it is right to try to send the right signs to inspire people because I believe education is the only way out of it.”

For this weekend’s British Grand Prix, F1 bosses have mandated a specific time in the pre-race schedule for the drivers to demonstrate their opposition to racism, after rushed and chaotic situations at the previous two races.

In the first three races of the season, the majority of drivers have taken the knee alongside Hamilton, while a minority chose to remain standing. All wore T-shirts expressing their opposition to racism.

Grand Prix Drivers’ Association director Romain Grosjean said he hoped to move towards a position later this season whereby all drivers go down on one knee before races.

But those who chose not to take the knee have indicated before this weekend’s race that they will not change their position.

Verstappen said: “Everybody has their own way of expressing it but we are all united in fighting racism and trying to end it. That’s the most important thing. It’s not about taking a knee or not.”

McLaren’s Carlos Sainz added: “I am a free man and I want to express myself in a way that I think is convenient to my culture and my principles. I’m going to keep it that way and I expect you guys and everyone in the paddock to respect that as I’m sure you will.”

Hamilton said he had spoken to FIA president Jean Todt, and F1 boss Chase Carey and managing director Ross Brawn, “to make sure they know we’re all on the same team here”.

The world champion added: “Things like giving us that little bit of extra time at the beginning before the race to show how united we are as a sport – other sports have done a better job of consistently doing that.

“They have been really open-minded and I do think it needs to continue through the year. I believe that’s what we will continue to do that.

“I believe there has been some push back from some teams maybe but it is a work in progress to get us all together but it is going in the right direction.”

Hamilton and Grosjean spoke on the phone after the last race in Hungary, where the world champion had singled out the Frenchman as one of a minority of drivers who had wished to discontinue the demonstrations.

Grosjean said there had been a misunderstanding, and that he had felt a responsibility as a senior figure in the GPDA to represent the views of those who felt one demonstration was enough.

Hamilton said: “We learned we have more in common than we perhaps think and he’s clearly a caring person.

“It is not easy for anybody to admit we’re wrong and that’s a great first step. But when we got off the phone I knew we were united and working towards the same coming goal.

“It is what it is going to take all of us to do, open up our minds, don’t put our barriers up, be open-minded. And acknowledging that it is an issue is sometimes the first step to making it better.”