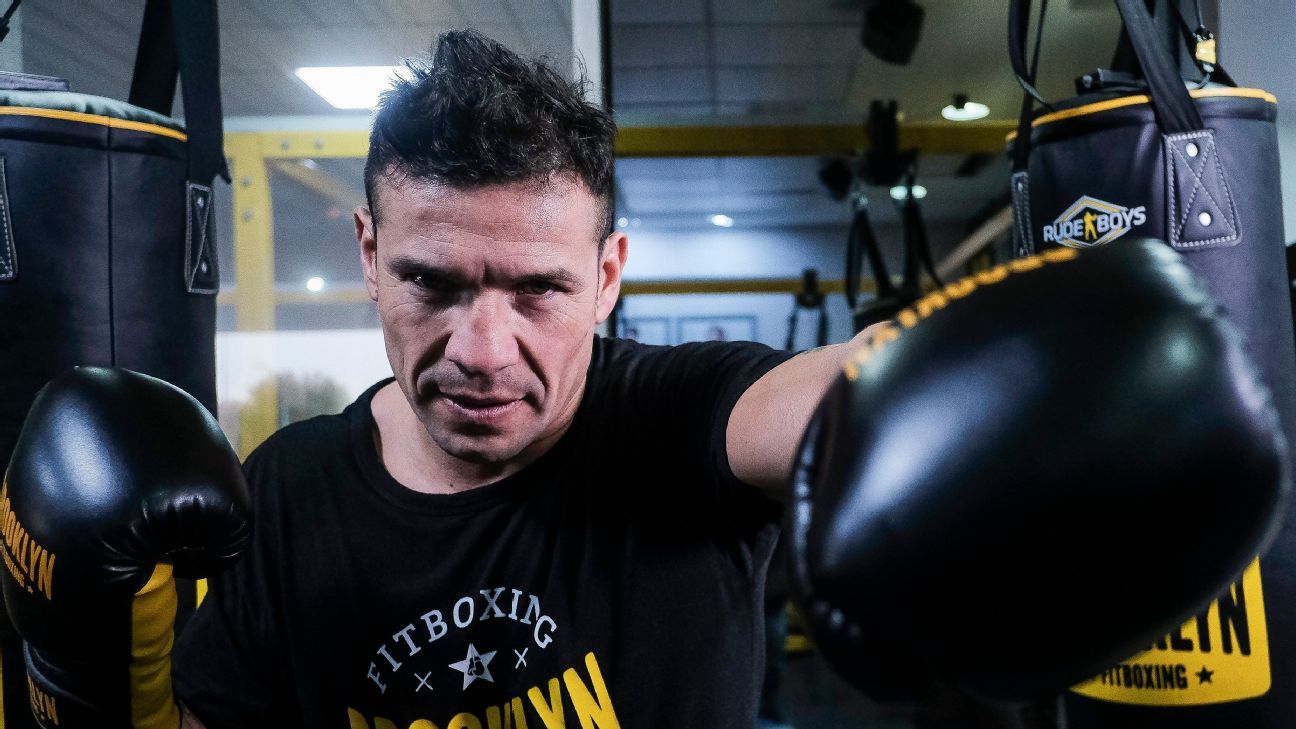 After 1½ months inside the Top Rank bubble at the MGM Grand Convention Center in Las Vegas, more boxing promotions are ready to return to action.

Big fights like Gervonta Davis vs. Leo Santa Cruz, Dillian Whyte vs. Alexander Povetkin, Jose Ramirez vs. Viktor Postol and Jorge Linares vs. Javier Fortuna are already scheduled for August. You can add to that list the return of former middleweight champion Sergio Martinez — at the age of 45 after a six-year hiatus — and two-division titlist Carl Frampton, who is going up in weight to test the waters at junior lightweight.

With everything on the horizon, Steve Kim and Nick Parkinson answer some of the biggest questions about these matchups, as well as what we can expect next for some of the fighters.

What are your thoughts on Sergio Martinez returning to the ring on Aug. 22?

Kim: The last time I saw “Maravilla” was on the night of June 7, 2014, when he was bludgeoned by Miguel Cotto in a WBC middleweight title defense. At that point, Martinez was that sleek luxury sports car that had a couple of flat tires and a bad transmission. His right knee injuries were well-known, and at that point his trademark mobility and athleticism had completely eroded. All the signs were there in his previous fight as well, as he hobbled to the finish line in a unanimous decision victory against Martin Murray. Now, six years later, he’s returning to the ring at age 45.

It’s certainly not a great idea, but it’s his life. I’m not a fan of fighters who didn’t have much left at the end coming back under any circumstances. My hope is that he’s matched carefully, and that ultimately nobody gets hurt. During his prime he was a fine fighter, one who conducted himself in a dignified manner and boxed his way to an accomplished career. I personally don’t think this tarnishes his legacy — and I do believe he’s a Hall of Famer — but you are left wondering why it has come to this.

Parkinson: Boxing doesn’t need another story about a one-time great coming out of retirement for a few extra bucks right now. Just look at the reaction to Mike Tyson and Roy Jones Jr.’s recent announcement that they will be fighting an exhibition bout at the ages of 54 and 51, respectively.

Martinez might be younger at 45, but very few fighters have been able to succeed at the top of professional boxing in their late 40s. George Foreman won back the world heavyweight title at 45, and Bernard Hopkins was a world champion at the age of 48. But success stories like that are rare, and after long careers, there are serious health concerns and the danger of head injuries for a 40-something boxer. On top of that, Martinez was dogged by terrible knee injuries late in his career. Martinez will be a shadow of his former self after a six-year absence, and it would be better to see him stay on the safe side of the ropes and take his place in the Hall of the Fame.

Who wins the fight between Gervonta Davis and Leo Santa Cruz? How?

Kim: A big component of this bout will be whether “Tank” Davis can actually cut down effectively to make the 130-pound limit. I’ve believed from the very onset that at 135, this fight was a physical mismatch in favor of Davis. When Santa Cruz made his junior lightweight debut against Miguel Flores in November, you saw a fighter who reached his threshold in terms of which weight class he could still be effective. In short, Santa Cruz looked like someone who belonged at 126.

But if Davis does make the sacrifice to hit the junior lightweight limit, Santa Cruz probably has a much better shot. Davis is the naturally bigger man, the decidedly harder puncher, and he’s younger. If the weight cut doesn’t completely drain him, he stops Santa Cruz late.

One interesting note about this fight — it was announced the WBA would allow for both the 130- and 135-pound titles (Santa Cruz is the organization’s “super” champion at junior lightweight, while Davis is the “regular” belt-holder at lightweight) to be on the line. So even if Tank comes in above 130 but still comes in at or below 135, this could still be a title bout. Should this scenario happen, the question is whether Santa Cruz will stand his ground and make Davis come in at the contracted weight.

Parkinson: Davis by KO, but this is assuming he has no trouble making the junior lightweight limit. Davis struggled to even make the lightweight limit for his last fight against Yuriorkis Gamboa (he made it at the second attempt), so it is a concern backing him. But Davis, who is six years younger at 25, has extraordinary power and has won 14 consecutive fights by stoppage. Santa Cruz will try to win by fighting at distance and utilizing a 2-inch height and reach advantage, a strategy that could help him win a decision if Davis comes in weight-drained. Santa Cruz has never been stopped, but he also has never been hit by someone as hard as Davis does.

Can Carl Frampton succeed at 130 pounds? Who are some good opponents for him if he takes care of business on Aug. 15?

Kim: Yeah, he has good enough skills to beat a pretty good number of guys, but size and age will ultimately be a factor. Should Frampton come out clean in his return on Aug. 15, the chatter is that he’ll face WBO belt-holder Jamel Herring in November. That’s a solid pairing; you have the well-known and accomplished Frampton facing a titlist who needs a recognizable name on his ledger, as Herring continues to state his case for a unification bout in the near future.

Among the belt-holders, WBC champion Miguel Berchelt might simply be too big for Frampton, but IBF titlist Joseph Diaz Jr. would be a more favorable fight. Diaz certainly is a sound technical fighter, but isn’t a great power puncher. In terms of pure style, Frampton against Andrew Cancio would be a very good matchup. A fight that would hold a lot of interest in Ireland would be a battle with Jono Carroll, who has come on recently and has a grinding style.

Parkinson: Yes, but he will find it harder to become the top man at 130 pounds like he was for spells at featherweight and junior featherweight. The Northern Irishman, who has beaten Santa Cruz, Nonito Donaire and Scott Quigg in the two lighter weight classes, has not been a full world titleholder for four years and needs to move fast to achieve his goal of becoming a three-weight world champion. Frampton, 33, who lost a unanimous decision to England’s Josh Warrington when he challenged him for the IBF world featherweight title in December 2018, is being linked to Herring, and that’s a fight Frampton can win despite a sizable height and reach disadvantage. Frampton should have too much experience and quality for Herring. Oscar Valdez, another former featherweight titleholder, also would be a close, interesting matchup between two featherweight champions trying to establish themselves at 130.

What other fight in August are you looking forward to?

Kim: Jorge Linares facing Javier Fortuna. Linares is always one of the most fascinating fighters to watch, because for all of his skill and elegance inside the ring, he’s also vulnerable and fragile. On any given night Linares can win or lose against anyone in the world. He has captured multiple world titles in three weight divisions and gave Vasiliy Lomachenko his toughest test to date as a professional. But Linares has also been knocked out in every single one of his five losses — some of which have been mind-boggling defeats.

In his most recent outing, Linares dispatched Carlos Morales in four rounds on Feb. 14, in what was supposed to be a prelude to a showdown with lightweight sensation Ryan Garcia. That’s gone by the wayside, but regardless, Linares believes he has one last title run left in him. In Fortuna, he’s facing a solid fighter who’s rated No. 1 by the WBC. If Linares can overcome Fortuna, it will certainly get him back in the mix for another lightweight title shot.

Parkinson: There is so much on the line in the fight between WBC interim heavyweight titlist Dillian Whyte and Alexander Povetkin on Aug. 22. Whyte, 32, the mandatory challenger for WBC champion Tyson Fury, has been waiting for over 2½ years for his title shot. Povetkin, 40, desperately needs a win to stay relevant in the division. The winner could face Fury or Deontay Wilder early next year, which makes Whyte-Povektin the biggest fight since the return of boxing after the coronavirus pandemic.

On the same night, and also staged in the garden of Matchroom’s office headquarters, there is an outstanding rematch between Ireland’s Katie Taylor and Belgium’s Delfine Persoon for Taylor’s undisputed world lightweight titles. A fight of such quality is a real treat for boxing fans who have been starved of such matchups since the first quarter of the year. Taylor won their first fight via a disputed split decision and wants to erase the doubts this time. Persoon is motivated by a sense of injustice and wants revenge.

WBO-WBC junior welterweight titlist Jose Ramirez makes a long-awaited title defense against former titleholder Viktor Postol in California on Aug. 29 after this bout was postponed twice due to COVID-19. Ramirez is the division’s No. 1 fighter, with hopes of setting up a unification bout against Josh Taylor, who holds the other two world titles.

How would the winner of Dillian Whyte-Alexander Povetkin do against WBC champ Tyson Fury?

Kim: I’ll go on the record now and say that Whyte defeats Povektin. With that said, Fury should be a pretty solid favorite over Whyte. Simply put, size, length, reach and overall skills all seem to swing in the direction of “The Gypsy King.” Whyte has crafted a very good heavyweight résumé and he has good power in both hands. But will he be able to get past Fury’s educated left hand, and ever get to his body? A focused and fit Fury seems like he’s going to be a very tough out for the next few years in the heavyweight division.

Parkinson: If it’s Whyte, it will be a fun buildup and due to the rivalry with fellow English boxer and former sparring partner Fury, a fun fight. Whyte would make it more interesting against Fury than Povetkin, but ultimately Fury wins against either man, without the drama of his two fights with Wilder.