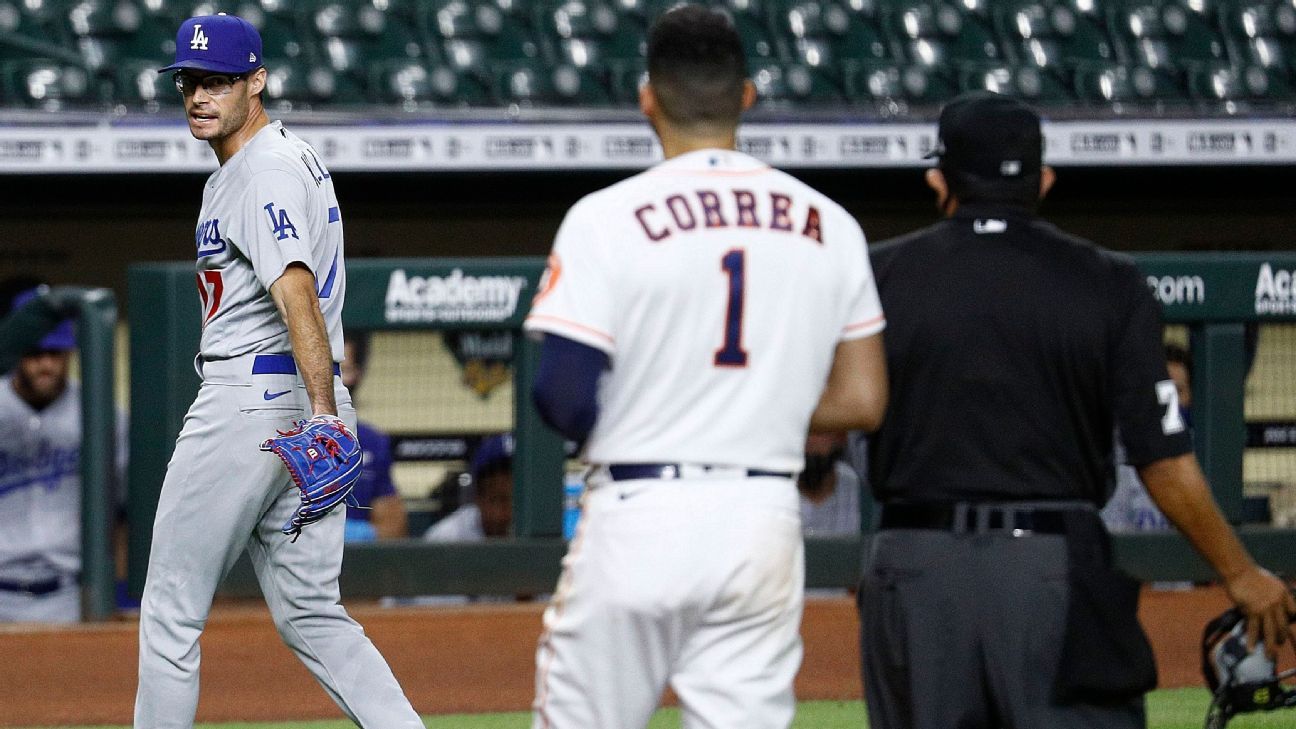 Benches cleared on Tuesday at Minute Maid Park in Houston after the sixth inning of a highly anticipated matchup between the Los Angeles Dodgers and the Houston Astros.

The tension was rooted in Joe Kelly‘s erratic bottom of the sixth, in which he threw a 3-0 fastball behind Alex Bregman and nearly hit Yuli Gurriel and Carlos Correa. With stadiums empty because of the coronavirus pandemic, the broadcast caught someone yelling at Kelly to “get back on the mound, motherf—er.”

After Kelly struck out Correa, leaving two runners stranded to maintain a three-run lead, the Dodgers’ hard-throwing reliever taunted Correa and had some words for him as he made his way to the dugout. The two then began jawing at each other, prompting both benches to clear, with no punches thrown. A warning was issued to both sides, and Astros manager Dusty Baker got into a close, heated conversation with crew chief Chris Guccione, though both were wearing face masks.

Tuesday’s game, a 5-2 Dodgers victory, marked the first time the Dodgers and Astros have met since the Astros were revealed to have stolen signs and have communicated them to their hitters by banging a trash can in 2017, a method that extended through a seven-game World Series triumph over the Dodgers. The Dodgers expressed a lot of anger toward the Astros during spring training. They tried to downplay the matchup once baseball resumed, but hours before first pitch, Dodgers outfielder Joc Pederson acknowledged that there might be added motivation.

“The history obviously is out there,” Pederson said. “Everybody knows what’s at stake and what happened. For being no fans, maybe sometimes the energy could be lacking a little bit. I don’t think that will be the case for this series.”

Kelly threw three consecutive balls to Bregman with none on, one out and the Dodgers leading 5-2 in the bottom of the sixth. The fourth pitch, at 96.4 mph, sailed behind Bregman. Bregman didn’t say a word, and Kelly yawned. He later threw four consecutive pitches high to Gurriel, one of them a knuckle curveball that nearly hit the batter. The first two pitches to Correa, also knuckle curves, brushed him back. Then Kelly threw four more of those breaking pitches and ultimately struck Correa out on a pitch low and away.

Correa, who drove in the Astros’ first two runs, publicly chided Cody Bellinger during spring training, saying Bellinger was speaking recklessly in claiming the Astros “cheated for three years” and that Jose Altuve “stole” an MVP from Aaron Judge.

Clayton Kershaw, who is on the injured list, was among those seen jawing back at Correa after benches cleared.

Prior to the game, Dodgers manager Dave Roberts stressed there would be no retaliation.

“I don’t see that happening,” he said. “I just don’t want to take away our focus from winning tonight and tomorrow.”