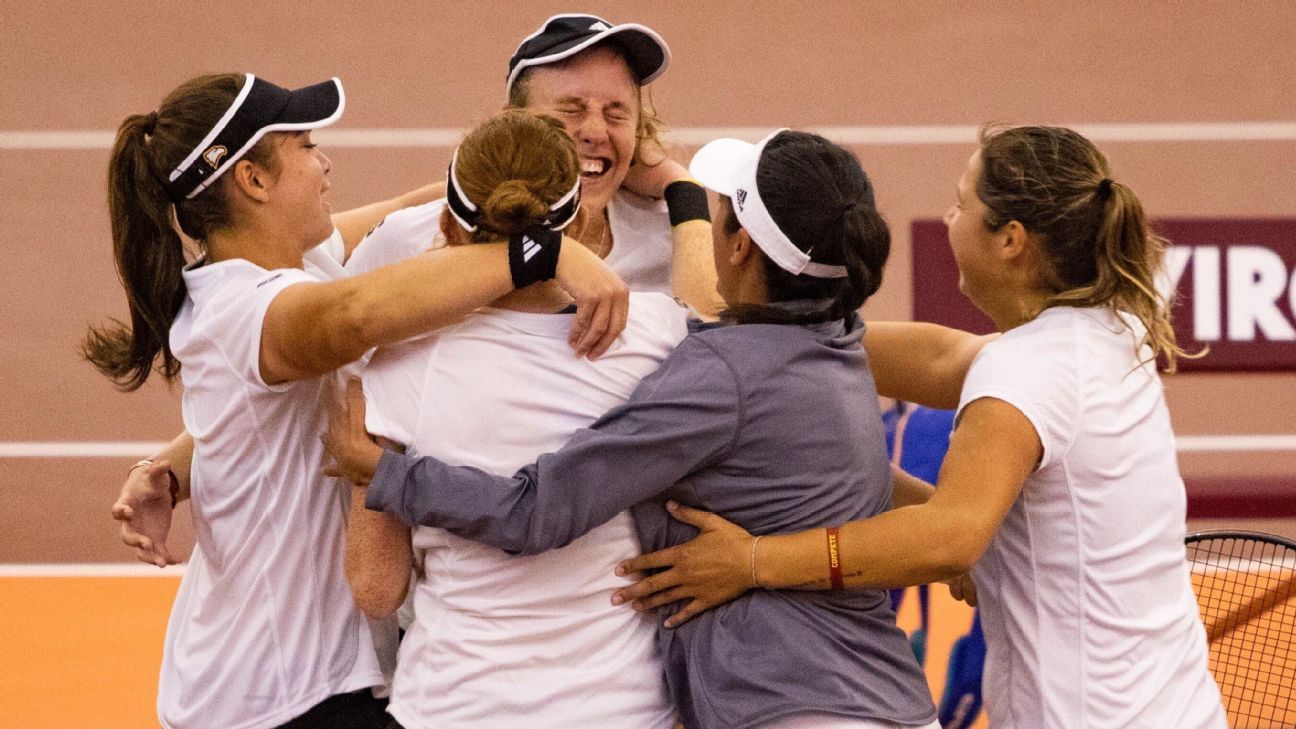 Clayton Almeida will never forget the phone call he received from his former teammate Gustavo Zanette one Friday morning in June.

“Did you hear they’re going to cut the program?”

Almeida was confused. Surely he wasn’t talking about the Winthrop University tennis teams, where he had played from 2002 to 2005 and won two Big South titles during his time at the school. But that’s exactly what Zanette was referring to. He was shocked, upset and felt blindsided.

The school made the official announcement later that day: Both the men’s and women’s teams — combined winners of 30 conference championships — were being discontinued due to the financial impact of the coronavirus, effective immediately.

The pandemic has wreaked financial havoc across the NCAA, and many schools have announced programs being disbanded, budgets being slashed and required pay cuts for coaching and support staffs. At least 13 Division I schools have terminated programs, including 11 teams at Stanford and four at UConn.

“You always feel badly when you hear a team got cut somewhere, but yet you never really know exactly what it’s going to be like until it happens to you,” said Kate Moore, ECU’s associate head coach of the swimming and diving team.

Almeida said he felt an emptiness he had never before experienced when he got the news. He commiserated and sobbed with a friend from the women’s team over the phone later that night. He was in such disbelief afterward that he struggled to sleep.

But by the next morning, the feelings had manifested into something different.

“I said to myself, ‘OK, we’re tennis players and we lost the first set, but we’re not out,” Almeida said. “I started posting about it on social media, and then started talking with other teammates and we knew we had to do something. It feels like our opponent is Rafael Nadal but we know what we’re up against, and we’re prepared for five sets.”

A friend put Almeida in touch with Moore, who had also competed for ECU as a student, and a group of fellow alumni and current team members had been working to get the administration to change its decision. She immediately started giving suggestions for what the Winthrop group could do.

The two programs have collaborated ever since, thanks to their constantly growing list of supporters, near-daily conversations and a continual exchange of ideas and strategies. They have even made some headway: The group from Winthrop is hoping to make the formal agenda for August’s Board of Trustees meeting.

“Obviously we both want our programs back, and if there’s anything we can do to help them, we’re more than happy to do it,” Moore said. “It started with a Zoom meeting, and now it’s a constant thing where we let each other know right away if something has worked [to help raise awareness or funds] and it’s just an ongoing collaboration. If Winthrop was able to bring their tennis program back, it would definitely encourage us, since we’ve been working so closely with them. We’re both Olympic sports, and are considered non-revenue, just like most of the programs getting cut everywhere, and our teams have similar winning traditions and other things in common.

“We have to help each other.”

Winthrop’s women’s tennis team is the school’s most successful athletic program in its history: 21 Big South championships, including the past four, and 20 regular-season titles. The Eagles have made 17 NCAA tournaments, recording their first win in the event in an upset over Auburn in 2018. The men’s program has won seven conference titles and nine regular-season championships, most recently in 2018.

Tayla Van Eck, a rising senior on the women’s team, was at her home in Johannesburg, South Africa, when she got an email alerting her of an emergency Zoom meeting the next day. She knew cuts were likely in the athletic department, but it never occurred to her it would be the tennis teams.

“I burst into tears as soon as [Ken Halpin, vice president for intercollegiate athletics] told us on the meeting,” she said. “It was terrible. It was such a shock. I don’t think anyone knew. I certainly had no idea, not even an inkling of any kind.

“It made no sense to me because of all the milestones the tennis teams have reached, but also because there was no attempt to keep our program with fundraising or decreasing spending. It was just a decision that was so done and dusted. There was no real attempt to save it, which I think is what was worse for me.”

“At first when we heard about ECU, it made us realize we weren’t the only ones going through this.”

Van Eck and her teammates were told they would be able to maintain their scholarships if they chose to stay at the school, or would receive help with the transfer process if they wanted to play elsewhere. Van Eck didn’t want her tennis career to end with a video meeting at her parents’ house some 8,000 miles away from her teammates, and she initially put herself in the transfer portal. After speaking to a few coaches and trying to figure out how her academic credits would carry over, she decided to stay at Winthrop and finish her degree in education. She knows it will be strange to be at the school in the fall and not be a part of the team.

“It feels like we are losing our family,” she said.

The Winthrop athletic department declined an interview request about the termination of the tennis programs, but it sent the statement the school published on the day of the announcement. The decision, per the release, was in part due to the costly renovations the courts would need (which players were told would cost more than $1 million).

The members of the ECU swimming and diving teams were equally caught off guard when they received the news about their programs. The men’s team won the American Athletic Conference title in February, its fourth in six years in the conference. The women’s team was coming off a fourth-place finish at the AAC Championships. Combined, the teams have produced 47 All-Americans and earned 21 conference titles.

“We knew there would be cuts, but we were pretty sure that we would be safe considering we’re a championship-level program, great in the classroom, all that good stuff that you would want in a collegiate athletic program,” said Ryan Brennan, a rising junior on the men’s team. “But then we have this meeting with the tennis teams, and within two minutes, we find out we’ve all been cut. It was just surreal, it still doesn’t feel real.”

Like Winthrop, ECU said it would honor scholarships or assist with the transfer process. Brennan, an accounting major, also entered the portal, but with so much uncertainty surrounding the upcoming school year due to the pandemic, ultimately decided to stay.

ECU also declined an interview request from ESPN, but sent its initial statement: “Ultimately, the reduction of sports aligns ECU with our American Athletic Conference peers and provides a roadmap to a more sustainable future for the University and athletics,” interim chancellor Ron Mitchelson said, in part.

For Van Eck, Brennan and many of their respective teammates who are not transferring, the idea of being on campus and not part of the team is almost too devastating to bear. They both said they knew early on they had to fight the decisions and joined the alumni in doing what they could. They’ve been bolstered by a lone bright spot over the past few months. Bowling Green State University reinstated its baseball team in June, after disbanding the program about a month prior, following a pledge drive that resulted in $1.5 million in donations.

ECU learned of its fate on May 21, prior to Bowling Green’s reinstatement, and the group started looking for other teams who had reversed their fortunes in previous years. Someone suggested they reach out to Billy Rinehart, a University of North Carolina Wilmington alumnus who had helped save its swim programs — and three other teams — in 2013 after the school announced they were being disbanded with a fundraising and awareness movement.

For Rinehart, a political campaign organizer who previously worked on Barack Obama’s presidential run in 2008, the call for help couldn’t have been more bittersweet. His father had died two days prior, and he had been so proud of Rinehart’s efforts at UNCW, even having a magazine spread about it framed on the wall.

“It just felt like this could be a great way to honor my father’s legacy,” he said. “He was so happy when we went against the odds and saved the sports program, and this seemed like another opportunity to go out there and do the same in helping some other folks do the same. Truly it was the perfect amount of time in between his passing and me coming up for my first breath of air during that initial grieving.”

Rinehart got on a call soon after with Moore and some others from ECU.

Moore and her fellow Pirates started emailing as many alumni as they could, contacted as many local media outlets as possible and created a GoFundMe page and various social media accounts to spread the word. Brennan created an online petition that has over 20,000 signatures. Moore said they have accumulated more than $750,000 in pledges.

By the time the group at Winthrop reached out, those at ECU felt like seasoned veterans in the space. Winthrop started following their model, and the group started an aggressive grassroots campaign, reaching out to hundreds of alumni with frequent email blasts, as well on social media channels and in area media.

“At first when we heard about ECU, it made us realize we weren’t the only ones going through this,” said Almeida. “But then when talking to Kate, we realized just how much we had in common with our administrations, and how neither team was given a chance to fundraise before the decisions were made. We decided to help each other and now every day is like ‘Hey, what are you guys doing? What’s your next plan? What is happening right now?'”

Almeida said they have over $600,000 pledged thus far and received an estimate for a significantly cheaper court renovation that would be just under the pledged total. The group believes the team would be financially set for three years with its current funds and scholarships they still have in place, and have a plan for future sustainability.

Both groups say they have struggled to have much communication with their respective schools and are uncertain how much money it will take to convince the athletic departments to reverse the decisions. They say they have been unable to get many answers from the start, but continue to email and call school officials demanding some clarity. If one group has any success, they immediately let the other know so they can try to replicate it.

The Winthrop and ECU teams are cautiously optimistic about their chances. They recognize the financial concerns and doubt about the 2020-21 athletic calendar are real. They also understand they may not be successful for the upcoming season, but they insist they won’t give up. They know, if nothing else, they have a passionate, if not completely unlikely, team in their corner that will keep fighting for as long as it takes.

“These programs are so special, and when you hear them talk about it, you get chills,” said Rinehart, who is working on putting together a resource guide for programs that have been recently cut. “These are historic programs with stories and legacies that continue and championships and stories that jump off the paper. We have to do what we can to try and give future student-athletes the same opportunities at these programs.”