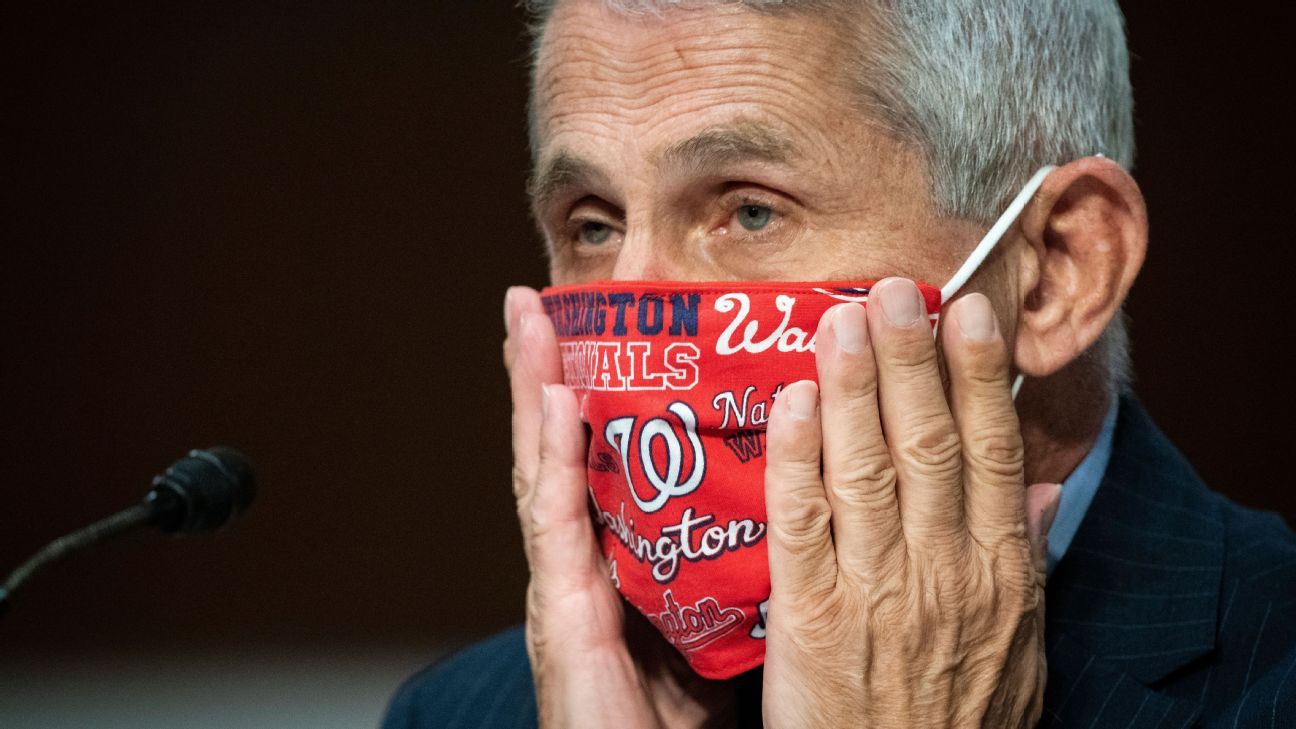 More than a dozen Marlins players and staff members tested positive for COVID-19, stranding the team in Philadelphia and raising anew questions about MLB’s attempts to conduct a season.

“This could put it in danger,” said Fauci, the director of the National Institute of Allergy and Infectious Diseases. “I don’t believe they need to stop, but we just need to follow this and see what happens with other teams on a day-by-day basis.”

Fauci made his comments on ABC’s “Good Morning America.”

“Major League Baseball — the players, the owners, the managers — have put a lot of effort into getting together and putting protocols that we feel would work,” Fauci said. “It’s very unfortunate what happened with the Miami [Marlins].”

Their outbreak continued to disrupt Major League Baseball’s schedule Tuesday, the sixth day of the pandemic-delayed season, with the Marlins’ home game against Baltimore postponed.

The game Monday between those teams was also called off, as was the Yankees’ series opener Monday at Philadelphia, where New York would have been in the same clubhouse the Marlins used last weekend.

The Marlins had at least 11 players and two coaches test positive over the past few days.

“Obviously, we don’t want any player to get exposed. It’s not a positive thing,” Commissioner Rob Manfred said on the MLB Network. “But I don’t see it as a nightmare. … We think we can keep people safe and continue to play.”

The Orioles, who made a trip to Miami without playing a game, are scheduled to host the Marlins in a two-game series starting Wednesday.

“If the testing results are acceptable, the Marlins will resume play in Baltimore on Wednesday against the Orioles,” Manfred said.

Meanwhile, Chicago White Sox manager Rick Renteria will be kept away from his team after experiencing a “slight cough and nasal congestion,” general manager Rick Hahn said. Tests were planned.

The Marlins’ outbreak was the talk of baseball, and Washington Nationals manager Dave Martinez choked on his words as he discussed the situation. Martinez missed time last season because of a heart condition, and the Nationals are scheduled to play in Miami this weekend.

“I’m going to be honest with you: I’m scared,” Martinez said. “My level of concern went from about an eight to a 12. I mean this thing really hits home now. … I got guys in our clubhouse that are really concerned, as well.”

The Marlins placed infielder Garrett Cooper, outfielder Harold Ramirez and right-hander Jose Urena on the injured list. They claimed right-hander Justin Shafer and left-hander Josh Smith off waivers from Cincinnati, and will likely rely heavily on reinforcements from their training camp in Jupiter, Florida.

Manfred said there are factors that would force MLB to alter plans.

“A team losing a number of players that rendered it completely noncompetitive would be an issue that we would have to address and have to think about making a change,” he said. “Whether that was shutting down a part of the season, the whole season, that depends on the circumstances. Same thing with respect to leaguewide. You get to a certain point leaguewide where it does become a health threat, and we certainly would shut down at that point.”

MLB and the union held talks Monday after aspects of the protocols were widely ignored during the season’s first four days, such as the prohibitions on high-fives and other physical celebrations.

The NBA and NHL plan to resume their seasons in bubble environments, with basketball at the ESPN Wide World of Sports Complex in Lake Buena Vista, Florida, and hockey at Edmonton, Alberta, and Toronto.

“The NBA and the NHL have an advantage: smaller numbers of players, shorter period of time,” Manfred said. “I understand why they did what they did. I’m just not sure it was workable for us.”

The NFL has opted not to create a bubble environment as training camps open for the coming season.

“It might be that they have to go in a bubble,” Fauci said, “but I think they’re conscientious enough and want to protect their players and protect the personnel that they will do the right thing.”