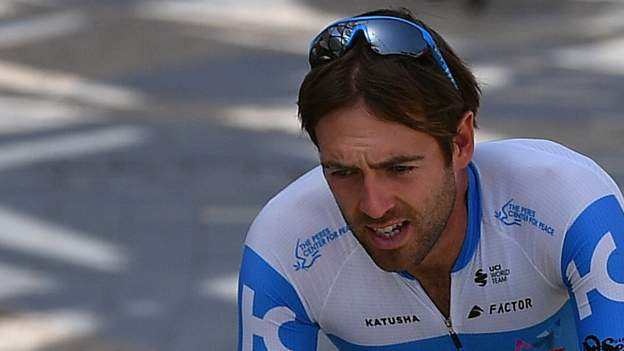 British rider Alex Dowsett has pulled out of the Vuelta a Burgos after a team-mate contracted coronavirus.

Dowsett, who rides for Israel Start Up Nation, withdrew before the race began on Tuesday as a precaution – but an initial test has come back negative.

In an eventful first day of World Tour cycling’s return to racing, Gijs Leemreize of Jumbo Visma lost the tip of his finger in a crash.

Leemreize, 20, has since had surgery to have the tip of his finger reattached by a plastic surgeon following the crash in the 158-kilometre stage from Catedral de Burgos to Mirador del Castillo in the north of Spain near Zaragoza.

Dowsett’s Israel Start-Up Nation team – who have signed Chris Froome as team leader from 2021 – took the decision to withdraw the Briton after discovering 23-year-old rider Omer Goldstein had contracted the virus and then been in contact with another of their riders, Itamar Einhorn.

“It’s like a domino effect, but we faced it and had a choice – we had to make sure there wasn’t a risk to the peloton.”

Einhorn has also been withdrawn from the race but has since returned a negative test.

The move comes days after women’s team CCC-Liv withdrew from two races in Spain because the health risks from coronavirus were “simply too great”.

Former hour record holder Dowsett, 31, was one of four British riders competing in one of the first races since coronavirus lockdowns came into force in many countries in March.

Mark Cavendish finished the stage at the back of the peloton for Bahrain Merida, nearly 19 minutes down, but will have a chance to win sprint stages later in the race.

2018 Vuelta a Espana winner Simon Yates of Michelton Scott is also in the race along with Trek Segafredo’s Charlie Quarterman.