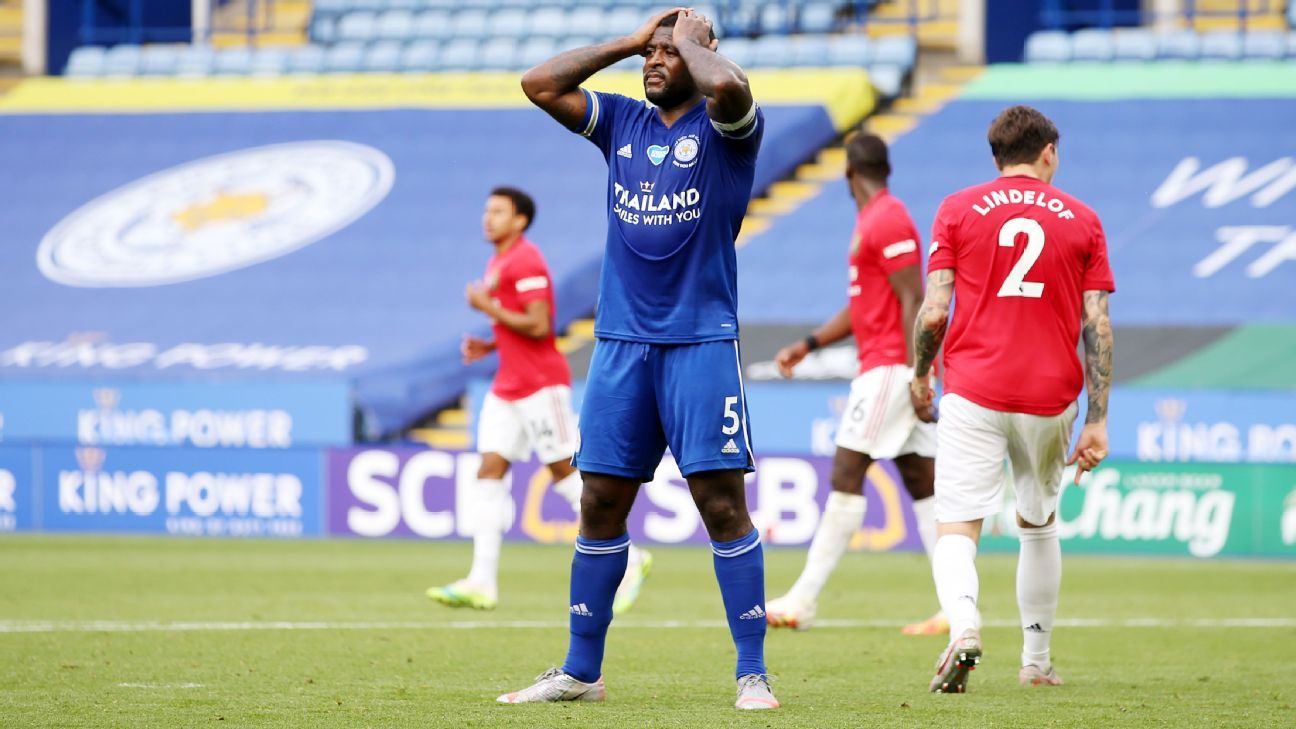 While the 2019-20 Premier League title was tied up in record-breaking fashion weeks ago by Liverpool, we were still able to enter the final day with plenty left to play for at both ends of the table.

Liverpool and Manchester City had already laid claim to the top two spots but the other two Champions League qualification berths were still up for grabs. Manchester United and Chelsea began the day occupying third and fourth place respectively, with both clubs level on 63 points and Leicester City poised just a single point behind them in fifth.

– Stream ESPN FC Daily on ESPN+ (U.S. only)
– What did you miss? The latest from Europe’s top leagues

As fate would have it, United travelled to face the Foxes at the King Power on the final day knowing that they simply had to avoid defeat to ensure a top-four finish. Likewise, were Leicester to grab a win and Chelsea avoid defeat in their last game at home against Wolves, United would be ousted from the reckoning and wash up in fifth.

Meanwhile, down in the relegation mire, Sunday began with two from three clubs knowing they would be jettisoned from the Premier League come close of play. While Norwich City were long gone, a sliver of hope remained for Watford, Aston Villa and Bournemouth — though the latter knew they required something akin to a miracle.

Watford, who recently took the decision to sack manager Nigel Pearson despite him being the very man responsible for dragging them off rock bottom, travelled to Arsenal knowing that they simply had to better Villa’s result against West Ham to guarantee their survival. Should both Watford and Villa produce draws or match each other’s results, Villa would stay up on goal difference — although with only one goal separating the two teams before kick-off (-26 versus -27) it would definitely be a “skin of the teeth” situation.

As for Bournemouth, the towering odds didn’t favour them. However, the Cherries could also still beat the drop on goal difference (they began the day on -27, too) by beating Everton and hoping beyond hope that both Villa and Watford lost elsewhere.

In short, a large number of nervous fans around the country would be following events from behind the couch, while there were also the Golden Boot and Golden Glove awards to be claimed and several records to potentially be broken. Here’s how the final day of the 2019-20 season panned out, as it happened.

16:04 BST — Arsenal 1-0 Watford: Things get off to a nightmarish start for Watford, conceding a penalty with just four minutes on the clock at the Emirates. After a protracted VAR check validated Mike Dean’s decision, Pierre-Emerick Aubameyang stepped up to put the Gunners ahead with his 21st league goal of the season. The race for the Golden Boot is on!

16.08 BST — Manchester City 0-0 Norwich City: Norwich look to be going out on a high as Onel Hernadez scores against Manchester City, but it’s ruled out for offside. That keeps City keeper Ederson level with Burnley’s Nick Pope in the race for the Golden Glove for most clean sheets.

16:12 BST — Manchester City 1-0 Norwich City: Manchester City compound Norwich’s woe by scoring the opening goal themselves. Gabriel Jesus scores but all eyes are on the assist, as Kevin De Bruyne is one away from equalling Thierry Henry’s record of 20 in one Premier League campaign. On this occasion, it’s not the Belgian who was the creator.

16:12 BST — Crystal Palace 0-1 Tottenham Hotspur: Harry Kane opens the scoring for Tottenham at Selhurst Park. That’s the England captain’s seventh goal since the restart, and it boosts Spurs’ hopes of qualifying for the Europa League next season.

16:13 BST — Everton 0-1 Bournemouth: Despite having never won an away game against Everton in the Premier League, Bournemouth prove they are up for the fight as a Josh King penalty thrusts them into an early lead at Goodison. The goal, King’s 50th for the club, sees the Cherries move up into 18th spot, above Watford on goal difference and just one point behind Aston Villa in 17th.

16:17 BST — Everton 0-1 Bournemouth: Bournemouth are very nearly afforded a golden chance to double their lead from the spot but a VAR review sees Eddie Howe’s plucky side deprived of a second penalty in the space of five minutes.

16:24 BST — Arsenal 2-0 Watford: After a relatively bright start, Watford are visibly stunned to fall two behind against Arsenal as Kieran Tierney‘s limp, deflected shot creeps inside the post to put a further dent in the Hornets’ precarious goal difference (WAT -29, BOU -26).

16:32 BST– Leicester City 0-0 Manchester United: Bruno Fernandes looks to have scored a wonderful opener for United after applying a svelte finish to Paul Pogba‘s delightful through ball, only to see it chalked off for an offside in the build-up.

16:33 BST — Arsenal 3-0 Watford: Watford look to be sinking into the mire without a trace as Aubameyang adds a third for Arsenal with only their third shot on target. A mix of clinical finishing and poor defending saw the Gabon striker score his 22nd goal of the season with a clever overhead kick. He’s now just one behind top scorer Jamie Vardy, who has 23.

16:36 BST — Leicester City 0-0 Manchester United: Fernandes receives treatment on his ankle. Fred goes for a warm-up on the touchline, but the Portuguese maestro stays on the field.

16:41 BST — Everton 1-1 Bournemouth: Moise Kean creeps in at the back post to equalise for Everton and bump a suddenly deflated Bournemouth team back down beneath Watford into 19th place.

16:43 BST — Arsenal 3-1 Watford: Watford become the latest team to capitalise from David Luiz‘s generosity as the Arsenal defender donates his fifth penalty of the season to the stricken Hornets. Troy Deeney has the necessary cojones to convert from the spot and give his side just the faintest glimmer of hope.

16:46 BST — Chelsea 1-0 Wolves: At the very end of a fairly uneventful half, Mason Mount tucks away a lovely free kick to put Chelsea ahead and send them above Manchester United into third place.

16:46 BST– Manchester City 2-0 Norwich City: De Bruyne curls in a beauty to make it 2-0 vs. Norwich, but he’s still looking for that elusive assist.

What. A. Goal. He’s scored some crackers this season but that was arguably @DeBruyneKev‘s best so far – fancy footwork, cuts inside and BANG! Top bins… what a man 🔥

16:46 BST — Everton 1-2 Bournemouth: Dominic Solanke puts Bournemouth back on the front foot with his third goal in three games. The striker’s header nudges the Cherries back above Watford in the standings thanks to their slightly superior goal difference.

16:49 BST — Chelsea 2-0 Wolves: Olivier Giroud doubles Chelsea’s lead as Frank Lampard‘s side look to be cantering toward Champions League qualification. United are still occupying fourth spot as the first half of their winner-takes-all scramble against Leicester ends goalless.

17:18 BST — Leicester City 0-0 Manchester United: Leicester send a shot across the bows early in the second half as Jamie Vardy rattles the United crossbar with a looping header.

Mane, Salah and Firmino ON.
Origi, Minamino and Ox OFF.

17:27 BST — Arsenal 3-2 Watford: It takes a former Gunner to restore Watford’s belief as Danny Welbeck pulls another one back for the Hornets. Despite having come back from 3-0 down, Watford are still below Bournemouth and know that only the completion of an incredible turnaround would be enough to deliver them from the drop.

17:28 BST — Leicester City 0-1 Manchester United: It is perhaps unsurprising that United finally managed to break the deadlock from the penalty spot — their 14th spot-kick of the season, a new Premier League record. Fernandes did the honours after Anthony Martial was bowled over by Jonny Evans in the Leicester box.

17:35 BST — Leicester City 0-1 Manchester United: Jesse Lingard comes on to replace Mason Greenwood, denying the youngster the chance of an 18th goal that would have seen him surpass George Best and Wayne Rooney as United’s highest-scoring season for a teenager.

17:39 BST — Everton 1-3 Bournemouth: Junior Stanislas added another goal for Bournemouth by firing a shot straight underneath Jordan Pickford. The Cherries were certainly doing everything within their power to stay up on the final day but always looming was the nagging doubt they might have left it too late.

17:44 BST — West Ham 0-1 Aston Villa: It took a long time but Jack Grealish finally finds the breakthrough at the London Stadium as the homegrown hero scores to power Villa away from the dotted line of doom.

17:46 BST — West Ham 1-1 Aston Villa: Well that was nice while it lasted! Andriy Yarmolenko took 100 seconds to burst Villa’s bubble. As it stands, Bournemouth and Watford are still joining Norwich in the Championship but another goal for the Hammers would see Villa slip out of the top flight.

17:52 BST — Leicester City 0-1 Manchester United: With the Champions League getting away from Leicester, frustration boils over at the King Power in stoppage time as Evans gets himself sent off for an ugly challenge on Scott McTominay. Evans was booked for the earlier penalty incident but is shown a straight red here.

Penalty given away, red card.

17:55 BST — West Ham 1-1 Aston Villa: Full time at the London Stadium. As it stands, Villa are safe but there were still anxious faces as they visitors awaited final results elsewhere.

17:55 BST — Everton 1-3 Bournemouth: They gave it their best, but with West Ham failing to find another goal against Villa, Bournemouth fall short at the very death. The anguished look on Eddie Howe’s face said it all.

17:57 BST — Arsenal 3-2 Watford: Full-time at the Emirates brought with it emotional scenes as Watford realise they have been consigned to their fate.

There we have it. Several months later than scheduled, the 2019-20 Premier League campaign is finally done and dusted. The final day certainly lived up to its billing as tense teams traded blows and rungs on the Premier League ladder right until the very last.

Manchester United and Chelsea ended the afternoon three points better off but ultimately things remained the same in the Champions League berths as Leicester missed out.

Down at the bottom, Bournemouth managed to smuggle themselves a slightly better finish than perhaps anticipated but alas it wasn’t enough, as both the Cherries and Watford will join Norwich in the Championship next year.

Leicester may have lost but Jamie Vardy won the Premier League Golden Boot despite not scoring in Leicester City’s 2-0 defeat against Manchester United.

And Ederson edged Nick Pope to win the Premier League Golden Glove award with 16 clean sheets to 15. The Manchester City goalkeeper was unbeaten in the 5-0 win against relegated Norwich while Pope was unable to shut-out Brighton in a 1-1 draw.