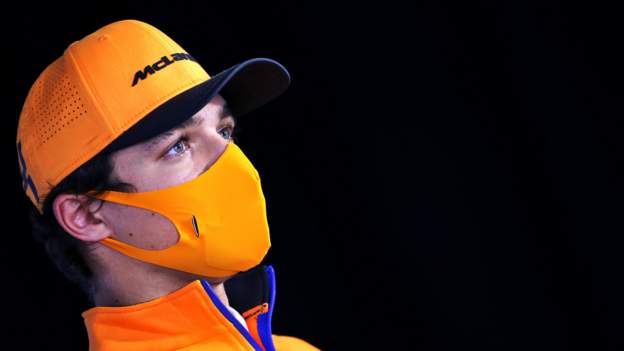 Lando Norris says his self-critical nature is behind the starring performances with which he has started the new Formula 1 season.

The McLaren driver is fourth in the championship going into this weekend’s British Grand Prix and says it is down to work on his weaknesses over the winter.

“I have the ability to be harsh on myself and in a lot of scenarios it’s good I am able to realise that,” Norris says.

“It makes me work hard that I am not happy with the job I have done.”

Norris is behind only Mercedes drivers Lewis Hamilton and Valtteri Bottas, who have dominated the start of the season, and Red Bull’s Max Verstappen.

And he owes his position to strong performances in the opening two races of the season at the Red Bull Ring.

In the first, he secured his maiden podium to pip Hamilton to third place by setting the fastest lap on the final circuit of the race.

And in the second, he passed both Racing Point cars, also on the final lap, having overtaken Renault’s Daniel Ricciardo the lap before.

Norris had an impressive debut season last year but says he has worked hard to improve where he thought he was lacking in 2019.

“I had to work on my weaknesses and purely my race pace from last year, but also my mentality and how I acted at the race track,” Norris says.

“I’m still having fun and enjoying myself and having laughs but at the same time dedicating more time to focus on the important thing, which is the racing and the driving, and just to be a bit more serious when I’ve got to be.

“I did a lot of days at McLaren before the season, before Covid, trying to improve on my weaknesses. The main thing out of these three weekends is how rewarding it’s been seeing that progress I’ve made.”

Norris says it is “rewarding” to see his own progress, but that he is only just beginning on the process of becoming the best F1 driver he can be.

“It’s not something I want to get ahead of myself in saying,” Norris says. “And I go to Silverstone and I can do a bad job on the tyres and not look after the front left, for example, and I could have a bad race because of it.

“I’m not saying I’m perfect and I’m a miles better race driver than I was but I’ve been doing a better job than last year.”

Norris has developed a significant following on social media because of his light and humorous touch, and after the last race in Hungary a tweet showing a picture of him helping strip down his car went viral.

But Norris says this was nothing unusual for him – it was just the first time it was publicised.

“It’s something I’ve done quite a few times before; it’s just never gone on social media,” Norris says, adding that it can only happen when he is not flying back to his home in the UK until the day after the race.

“I’ve done it since karting, really. I’ve always enjoyed doing it. But I guess in F1 it’s a bit different.

“I loved taking things apart as a kid. I enjoy it. It’s quite cool – to go and take apart an F1 car and work with the mechanics is good fun. And it’s good for the team that we’re working together and I’m helping them.

“It makes their job easier. It wasn’t just because we’ve done three weeks in a row; it’s more just helping them and enjoying it.

“We have some good laughs and I enjoy spending time and working with the mechanics and the engineers. Will [Joseph], my engineer, does it too. The only other thing I’d be doing would be going back and watching Netflix and I prefer working on the car.”

Norris has been suffering with chest pains for the past two events, caused by bruising which was the result of being exposed to the violent forces of an F1 car after four months enforced absence because of lockdown.

But he says he was “much better” in Hungary and he “should be fine come Silverstone”.

He says he is looking forward to his home race but that it will be “weird” experiencing the British GP without spectators.

“We have to be in the situation we are,” he says. “At least we’re racing again. But it makes it even worse knowing I have two races at my home track and it would have been amazing to have all the fans there.

“Last year, it was such an awesome experience – my first home race. Going out to the campsite and going on the fan stage in front of thousands and thousands of people was awesome.

“They are the people that make it a home race. The reason we are so excited about it being our home race is because of the fans, not just because it’s a race where you can travel back home and sleep in your own bed.”