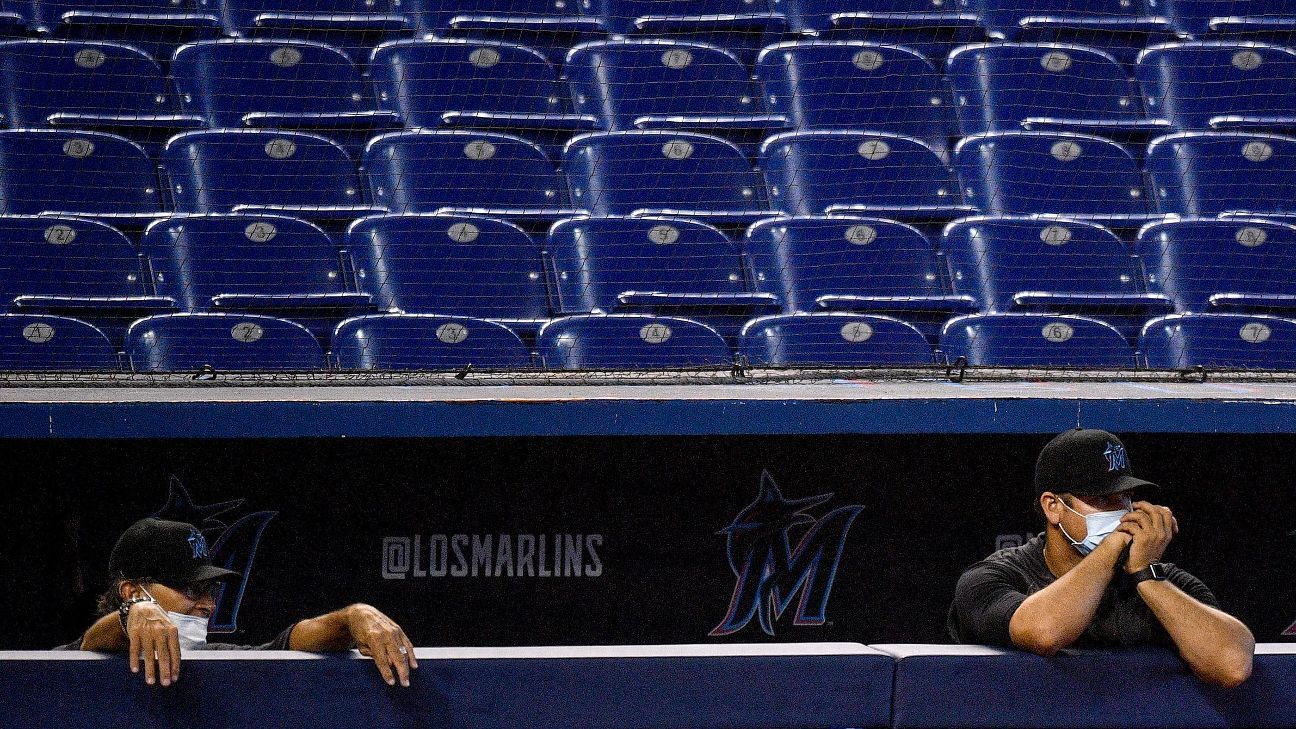 Major League Baseball is seeing its first coronavirus cancellations since the restart of the 2020 season.

An outbreak of COVID-19 spread throughout the Miami Marlins clubhouse, bringing the total cases in recent days to at least 13, sources told ESPN’s Jeff Passan and Jesse Rogers. As a result, the Marlins postponed their home opener, scheduled for Monday night; the game between the New York Yankees and the Phillies in Philadelphia — where the Marlins played over the weekend — also was postponed.

So what does this situation mean for the Marlins and MLB? We asked our experts to weigh in on some of the biggest questions.

Does the Marlins’ outbreak of positive cases put their season in jeopardy?

Of course, but that’s why there’s a taxi squad of up to 30 players. If the league is going to continue play, then it’s next man up, as hard as that might be to believe. There really is no other choice. If the Marlins’ season is in jeopardy, then the entire league’s is as well. — Jesse Rogers

What does the Marlins’ outbreak mean for the state of the MLB season as a whole?

We’ll only be able to answer this accurately with hindsight — though it looms as a possibility that Monday’s news is an inflection point with ramifications not only across the rest of this season, but across all the major team sports endeavoring to attempt what MLB already is trying to pull off. For now, this is baseball’s first big test of its ability to stage the 2020 season, and it is more than a little disheartening that it came with just 92 games in the books. Baseball couldn’t get through its first weekend without a possible nightmare scenario emerging.

‘That’s 2020 in a nutshell’: Inside the road of uncertainty MLB traveled to bring baseball back and the issues that remain. Jeff Passan

First, we await test results for the Phillies and their stadium personnel and the weekend’s umpiring crews, among others. We will see just how widely spread the breakout is among the Marlins, and once we do, we will determine if they can plausibly — and safely — field a viable active roster from their 60-player pool. We will cross our fingers and hope that the players and coaches who have already tested positive either don’t experience symptoms, or if they do, they are mild and short-lived.

When we know whether the Marlins can keep playing, we’ll know a lot more about the viability of continuing the season. Because what is already a 13-person outbreak is the exact kind of situation MLB’s system of protocols was designed to prevent, insofar as anything related to COVID-19 is preventable.

It’s also important that MLB be transparent with the decisions it makes in reaction to this situation. If the medical experts tell them it’s simply too dangerous for the Marlins to keep going, then baseball’s newest moment of truth will be at hand. — Bradford Doolittle

Could this impact other teams beyond the Marlins?

The Marlins played in Atlanta before going to Philadelphia. They played three games against the Phillies, occupying the visiting clubhouse at Citizens Bank Park, where the Yankees were due to take up residence Monday. The Marlins were slated to play the Orioles, who, presumably, are already in Miami. The Braves just finished a three-game series against the Mets, on the heels of their exhibition games against the Marlins. The Mets, meanwhile, are headed to Boston to begin a series Monday night at Fenway Park.

Hopefully, this outbreak is confined to the Marlins. However, you can easily see how one team’s outbreak could cause the whole house of cards to crumble. For now, we already know that the Yankees-Phillies game for Monday has been postponed, so at least those two teams have been tangibly impacted in addition to the Marlins. — Doolittle

Will MLB try to make up these games or are they canceled?

We don’t know specifics in terms of makeup dates, but the news release sent Monday morning by MLB labeled both the Marlins-Orioles and Yankees-Phillies games as postponements. Thus, for now, there seems to be intent to figure out a way to get the games in at some point. — Doolittle

Karl Ravech suggests MLB’s decision not to utilize a bubble format should serve as a learning experience for other leagues.

With the tight schedule to get games in, is there room to make up games canceled due to positive tests or other unique circumstances?

Each team’s schedule has six built-in days off, not including a day for the clubs that didn’t play in one of the two openers on Thursday. However, the opportunities for making up a game are limited by the format of the schedule and the need to limit the number of trips each team makes. Teams are also constrained at the back end of the schedule, as there is but one day between the end of the regular season and the start of the 16-team bracket.

Just to illustrate the puzzle with Miami and Baltimore: The Marlins and Orioles were to play two games in Miami, then proceed directly to Baltimore for games at Camden Yards on Wednesday and Thursday. These are the only scheduled matchups between the teams, which have mutual days off on Aug. 10 and Sept. 3. Again: Do you want teams to make an extra trip to meet up for a makeup game? The Orioles’ only other trip to Florida is scheduled for Aug. 25 to 27 at Tampa Bay; Baltimore has an off day before that series begins, but the Marlins will be out of town.

The only obvious possibility is to schedule a doubleheader at some point this week, or maybe even two of them. That does not immediately seem like a great or plausible option, as there is much to be sorted out in terms of fallout from the Marlins’ outbreak.

If the Phillies and Yankees are cleared to play by Tuesday, perhaps a doubleheader will be possible for them. Also, there is a mutual day off on Aug. 24. That day, the Yankees are scheduled to go from New York to Atlanta, while the Phillies would be going from Atlanta to Washington. Perhaps they could meet up in Philly. Perhaps.

However you look at schedule logistics right now, making up games is a side issue to figuring out just how bad this outbreak is and which teams, clubhouse personnel and umpires have been affected. — Doolittle

Could the Marlins just bring up players from their taxi squad and keep playing?

Yes, that was the whole point of the taxi squad — but it might not be feasible if half or more of their roster is infected. It’s still the most likely scenario, because the other choice is to shut down. — Rogers

Why were the Marlins allowed to play the Phillies on Sunday after multiple players tested positive?

There is no rule in place that players can’t participate as they await test results. But playing could have been a mistake.

That Miami had multiple positives before Sunday’s game and the contest went on as scheduled is concerning. Perhaps any time that happens, it should trigger an automatic postponement. Another red flag here is that even if you test every day, people do not necessarily exhibit symptoms or trigger positive tests right away. Inevitably, infected players will take the field without anyone, including themselves, knowing that they have contracted the virus.

To say that this lag is problematic would be massive understatement. But of course, that’s where all of the other protocols — masking, distancing, sanitizing — take on added importance. The one step baseball hasn’t taken is to make mask-wearing mandatory at all times, even on the field. And while that could be a next step, we don’t actually yet know how the Marlins’ outbreak began and if some kind of on-field mask mandate would have made a difference. Where did it happen? Airport? Airplane? Bus ride? Hotel lobby? Restroom? — Doolittle

Could this lead to more players opting out of the season?

Seems likely, but perhaps those who already made the decision to play will be determined to press on. However, given the number of the players, coaches and managers in baseball, there has to be people pondering whether to take the risk. A teamwide outbreak four days into the season could convince a few people that the risk is just too great. — Doolittle