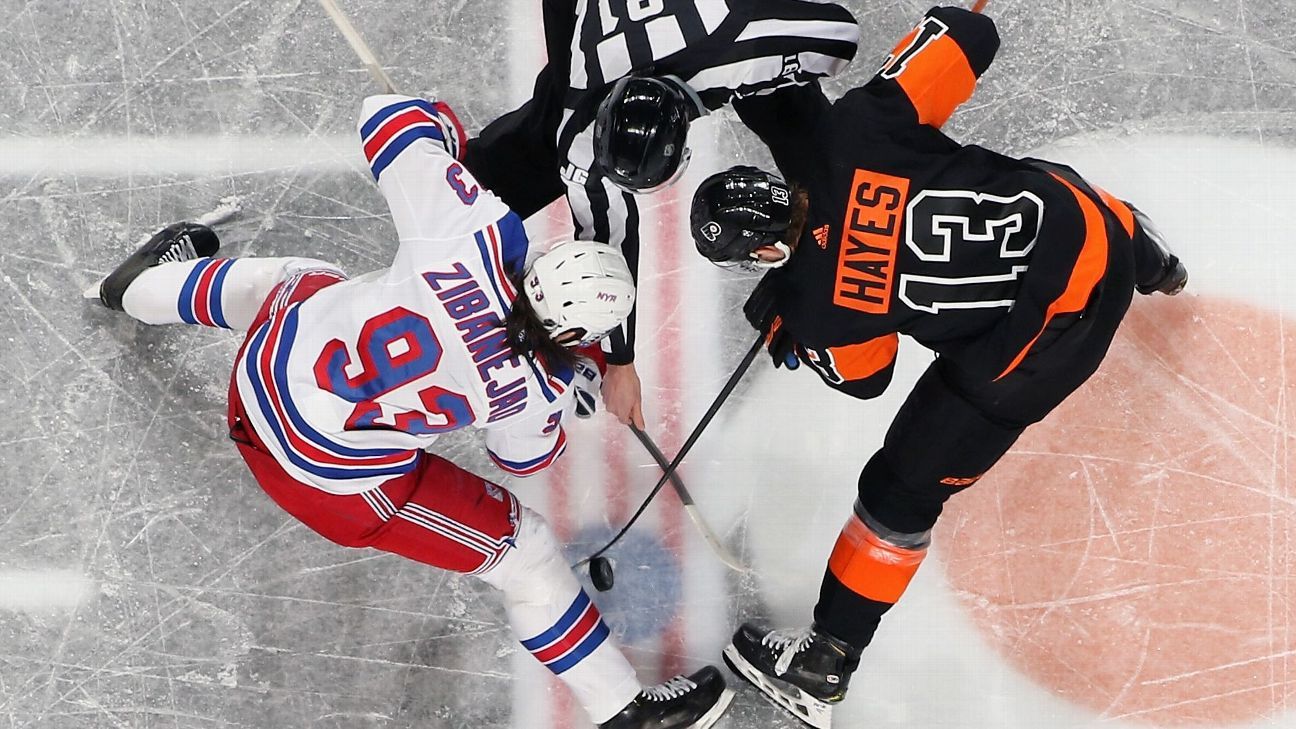 Steve Mayer was sitting in the best seat in Edmonton’s Rogers Place arena on Saturday: a luxury box located squarely at center ice. But now it’s an obstructed view seat, were fans allowed to watch a game from that vantage point.

Mayer’s view of the ice was blocked by a JitaCam, a 360-degree crane camera that is one of 12 additional camera setups that the NHL has on site in Edmonton, Alberta, and Toronto as the season restarts in empty arenas. There are many drawbacks to not having fans at Stanley Cup playoff games because of the COVID-19 pandemic, but one benefit is that televised games are going to look like something fans have never seen before.

“We’re never going to have this kind of creative freedom. Without fans, it makes it different. Whether that’s good or bad, it just changes the way you do things,” said Mayer, NHL chief content officer and senior executive VP of events and entertainment. “Hopefully everybody likes it. I know there are going to be people that just want to watch the game. And when the puck drops, for the most part, they’re just going to watch the game. We’re not messing with the game. We’re just trying to make it look pretty.”

The NHL has essentially turned its hub arenas into large TV studios, complete with constructed stages and giant LED screens behind the player benches. Empty seats are covered with tarps with team names and NHL logos. There will be additional cameras and unique lighting.

We spoke with Mayer on Saturday about how hockey will look and sound, both on television and inside the arenas, when the games begin on Saturday.

ESPN: How are games going to sound for the players inside the arena?

Mayer: From a game presentation standpoint, it’s going to sound extremely similar, with music and whistles and public address announcers and pump-up videos. We’re going to experiment with the crowd noise inside the arena. That’s something we’re going to do during the exhibition play. We’ve heard what it sounds like in here, but we want to actually hear if it’s a distraction for the players. I heard a report that some of the baseball players, it sounds like, had reactions to [piped-in crowd noise]. So we’re going to try it out. Let’s see what level it needs to be at.

On the TV side, we’re bringing in audio sweeteners. We’ve really worked hard at getting every possible sound at all of these different arenas. That’s for the broadcast, but we would try to take [that sound] and bring it into the arena, too.

Mayer: Yes, but we’re also bringing in sounds from our past broadcasts. EA Sports has shared their library, and that’s primarily what we’re going to work with. They have sounds from every arena. They’re all unique, and they’re all very good. We’re going to incorporate those into the broadcast. You’re going to hear a crowd, even if there is no crowd.

We’ve always mixed the microphones on the rink with crowd noise coming from inside the arena, and now they’re not. Some of those great sounds we love in hockey — there’s nothing to block them now. That’s come up a few times, and we really think they’ll be more significant in the broadcast. There’s going to be heavy emphasis on the sounds of the skates and the checks. For our outdoor games, we pipe those sounds into the stadium more than we do in the arena. Now we’re going to do that more in the arena to help keep up the energy.

ESPN: You asked teams to have season-ticket holders submit reactions — cheering, chanting — that will be used during games. You also asked a few teams, including the Boston Bruins, to submit booing. How are you going to handle piped-in booing during games?

Mayer: I don’t know if we are. What we wanted to do was have every possible chant, just to have them. We probably went overboard in what we asked for. I don’t know if we’re ever going to use [booing]. But I really don’t think, at the end of the day, that we’re going to go there. We figured it was better to have it, but I don’t see a scenario where we would use it.

ESPN: OK, how about this scenario: when Gary Bettman hands out the Stanley Cup?

ESPN: You asked for videos, not just sounds, from fans. Are you going to show the videos inside the arena, or are they just for broadcasts?

Mayer: It’s definitely not just for the broadcasts. Take one of the [chants] that you hear in an arena: “Let’s go, Flyers!” I don’t want to give it away too much, but all the [arena video] screens will have Flyers fans doing that chant, and that’ll come across on the broadcast. So I’ll be in the arena for those moments, and then we’ll also incorporate it into the broadcast.

One of the biggest pieces to all of this [is] that it doesn’t mean anything if it doesn’t make the broadcast. There’s no one really watching inside the arena. So we are really working closely with producers from Sportsnet and NBC so that when we do those moments, they’re coordinated on the broadcast. So on a whistle, the screens light up with, for example, Flyers fans. The chant goes out — “Let’s go, Flyers!” — and that becomes a part of the broadcast. This will happen continuously, where we’re all coordinated. When we do bring the fans in, they’ll be seen.

ESPN: Are you keeping with home-ice advantage, meaning you’ll hear chants for only the designated home team?

Mayer: We’ve talked a lot about this. A home game is going to sound like a home game, when it comes to the pump-up videos and the fans. The one thing we’ll do that makes it slightly neutral is goal songs [for both teams]. They add energy. We felt that if a road team wins 4-0, because we don’t have fans in the building, the energy in the broadcast might be lacking a bit. We felt like there will at least be a sense of energy. It’s a work in progress, but our sense is that if it’s a home game, then the videos we’ve put together would be seen for the home team.

ESPN: You have additional cameras and the ability to place them in spaces that you wouldn’t normally have access to inside the arena. How different is hockey going to look on TV? How weird are you getting? Did you consider, for example, using drones?

Mayer: In the past, all the cameras had to be in specific places because of the way the arena was build. Now, all rules are off. [The cameras] are going to be in unique positions. We’re going to show angles that have never been shown before.

The [JitaCam] is going to feel like a drone, but there was no way we were going to be able to fly a drone over the ice during a game. It was absolutely talked about, but we could never get clearance for that. The JitaCam, with its arm, can kind of feel like a drone. This satisfies it.

ESPN: For a while, those virtual advertising dasher boards from the All-Star Game were rumored to be in the plans for the restarted postseason. But they’re not. How did you find ways for sponsors to get their due, especially for local broadcasts?

Mayer: There will be virtual ads for teams in their markets on the glass and the net behind the goal. Believe it or not, there was a crazy interest [in virtual boards] from our sponsors that already get “in ice” ads and on the boards. There will be advertising on our LED screens as well. I do want to add virtual [graphics] — not for sponsors but for design — to the conference final and the [Stanley Cup] Final. I think no matter how cool our set looks and how many different things we do, at that point, people are going to be like, “What do you have for us next?”

Make picks throughout hockey’s postseason. Compete for a chance to win guaranteed cash prizes every round! Make Your Picks

ESPN: The NHL said there will be a five-second delay on the broadcast to catch obscenities and other language. You’ve said in the past that there would be more “24/7,” behind-the-scenes footage of players airing before and during games. How careful are you going to be about language in those segments?

Mayer: When it’s appointment viewing and it’s an “all-access” show, we’ve had no issue with them being uncensored. But for our games — especially given some of the times of these games this year, playing all day long — it’s really important that families watch and kids watch. We didn’t want to have an issue. Now, of course, we’re protecting our players. It’s a joint decision between us and the NHLPA. It was everybody that made that decision, including the networks. With families watching, it doesn’t seem right. We’ve gotten burned before — like by musical artists.

But we are planning on mic’ing up players and will be doing a “Quest For The Stanley Cup” show. We’re also doing “inside the bubble” shows for content every day. We want to show what it’s like.

ESPN: Finally, how different is hockey going to seem for fans watching the playoffs from home?

Mayer: We’re not doing a typical event for fans. We’re doing a made-for-television event because all of our fans are going to be watching at home. You’re going to see a couple of funny moments where we acknowledge that. A mascot might show up on the screens with a sign that says “GET LOUDER!” and he’s going to turn the card, and it’s going to say “YOU … AT HOME!”

This is going to be bizarro world. I’m so excited about it, but at the same time, I’ve nervous about it. My goal is to keep everybody as healthy and as safe as possible. Let’s finish this thing. But at the same time … this is cool.