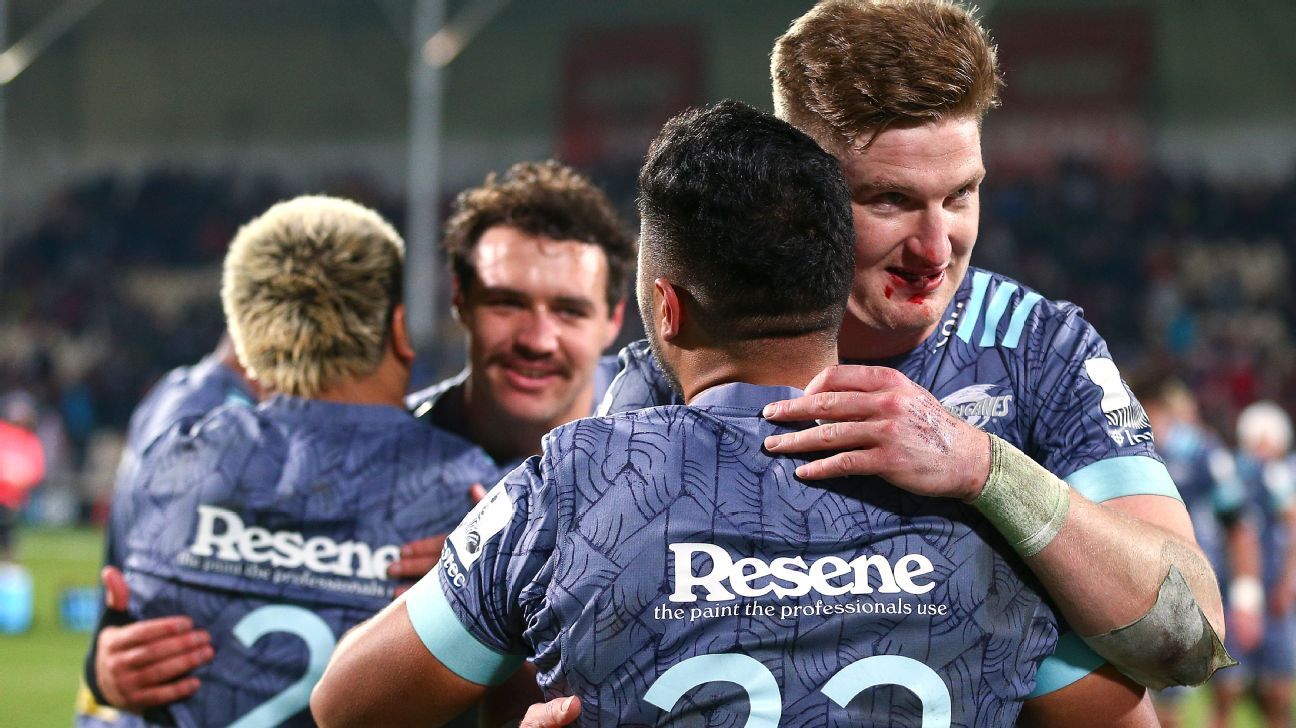 In the end, the Hurricanes and Blues held on for vital wins, keeping both sides in the hunt for competition honours.

Read on as we review the weekend’s action below.

We have ourselves a tournament.

Just when it looked like the Crusaders had one hand on the trophy, the Hurricanes went down to Christchurch and knocked off Scott Robertson’s side in the game of the tournament so far.

The Crusaders and Hurricanes have played out some superb contests in recent years — the Canes were also the last visiting team to win in Christchurch some four years ago — but this was as good as any and one that came without the Wellington franchise’s former chief entertainer: Beauden Barrett.

But through the boot of his brother, Jordie — who struck five penalty goals and two of three conversions — the power-running of Ardie Savea and Peter Umaga-Jensen and the finishing of Wes Goosen, the Hurricanes ensured the final three weeks of Super Rugby Aotearoa will be anything but a Crusaders procession.

Crusaders fly-half Richie Mo’unga was brilliant yet again but he did miss a conversion from out by the right touchline which would have levelled the scores and set up an even tighter finish on Saturday.

The Crusaders scored four tries to three but there was something about the steel in the Hurricanes that got them over the line, and there were none better on the park than Umaga-Jensen. The outside centre scored one try himself and also helped to create one of Goosen’s two five-pointers in the kind of breakout performance many New Zealanders had been waiting for since he first stepped into the top grade.

This was also Savea’s strongest effort since his return from injury earlier in the tournament. Playing at No. 8, a position he could yet fill for the All Blacks, Savea was back to his ball-carrying best and also proved a nuisance around the tackle contest.

But the match also came at a cost and one that reflects why so many New Zealand players have expressed a desire for Super Rugby Aotearoa to be a once-off. After terrorising the Blues last week, and sending a not-so-subtle message to some critics, Ngani Laumape exited Saturday night’s contest after 53 minutes with what is thought to be a broken wrist.

It is a cruel twist of fate of Laumape who was firmly among the All Blacks midfield calculations, but again reflects the physical toll that Super Rugby Aotearoa is having on its players.

Fortunately for the Hurricanes, the Round 8 bye will give them a chance to rest some weary bodies and reset for the final two weeks of the competition. They remain three points adrift of the Crusaders, who head to Hamilton to face the Chiefs this weekend.

The situation for the 10-time Super Rugby champions remain simple. It was always going to be an almighty challenge to run through Super Rugby Aotearoa undefeated and with that task no longer possible, they can focus on their final three games. And three more wins will see them to a fourth straight year of silverware.

This wasn’t an evening when the Crusaders were bad – they actually ran for 300 more metres than the visitors and scored the one further try, but they just came up a little bit short of a Hurricanes team that doesn’t seem to be missing Beauden Barrett all that much.

“We just had to grind it out, I don’t know, mate, when you are side-by-side with your teammate and you look in each other’s eyes, you just feel it instantly,” Savea said.

“One of those guys is [Du’Plessis Kirifi], he is a warrior, he leads us in that way and gets the boys up. Just the energy that you just feel, no words are spoken but you just feel each other’s presence.”

BEAUDY RETURNS TO 10, TUIPULOTU THUNDERS ON

Just how All Blacks coach Ian Foster approaches his first match in the top job will be intriguing.

And just where Beauden Barrett fits into things even more so.

The two-time World Rugby Player of the Year is of course a walk-up start to the squad, but there is case to be made that based on the form of other players at fly-half and fullback, Barrett doesn’t deserve to be in the run-on side.

His brother, Jordie, and Will Jordan have been far superior in the No. 15 jersey while Richie Mo’unga is carving defences up from No. 10 like never before. And that is really saying something given the Crusaders pivot’s deeds from last year.

Barrett made a solid first start back at No. 10 for the Blues on Sunday and has two more games to impress enough at fly-half to earn himself the All Blacks No. 15 jersey. It is indeed an interesting situation.

One player who is already demanding selection is Blues skipper Patrick Tuipulotu. While much of the attention was on rising No. 8 Hoskins Sotutu earlier in the season, Tuipulotu has since stolen the spotlight with a series of powerful displays that surely must have him in the box seat to partner Sam Whitelock in the absence of Brodie Retallick.

The final few weeks of Super Rugby Aotearoa won’t just decide the tournament’s inaugural champion – they will also have a huge bearing on the make-up of Foster’s first All Blacks side.

As will the highly anticipated North Island vs. South Island clash at the end of August.

NOTHING GOING THE CHIEFS’ WAY

After being told that Damian McKenzie’s overruled try should have stood last week, the Chiefs were left to lament another tough call in Auckland on Sunday.

The Chiefs felt referee Brendon Pickerill should have gone upstairs in the closing seconds of their 21-17 loss to the Blues after No. 8 Gus Sowakula had gone close to scoring.

But Pickerill instead awarded a penalty to the Blues for holding on and the hosts were able to clear downfield and hold on for the four-point win.

The frustration was evident on the faces of the usually reserved Anton Lienert-Brown and Aaron Cruden, the experienced duo livid Pickerill didn’t utilise the technology at his disposal in a similar situation to the one that saw the Chiefs denied a week earlier.

“In my opinion in a big moment we’ve got the TMO for a reason,” Lienert-Brown told Newstalk ZB after the game. “We’ve been on the wrong side of a lot of calls this whole year and when it counted, when we needed it, why not go upstairs?

“That was my frustration, and in all honesty I could have been better … it was a little bit frustrating. But that’s where I saw things; in a massive moment I think we’ve got to use the TMO.”

Unfortunately for the Chiefs, it meant a seventh straight loss. And there are more than just a few rumblings about whether Warren Gatland’s outstanding record with Wales and the Lions will translate into provincial success with Chiefs over the next few years in New Zealand.