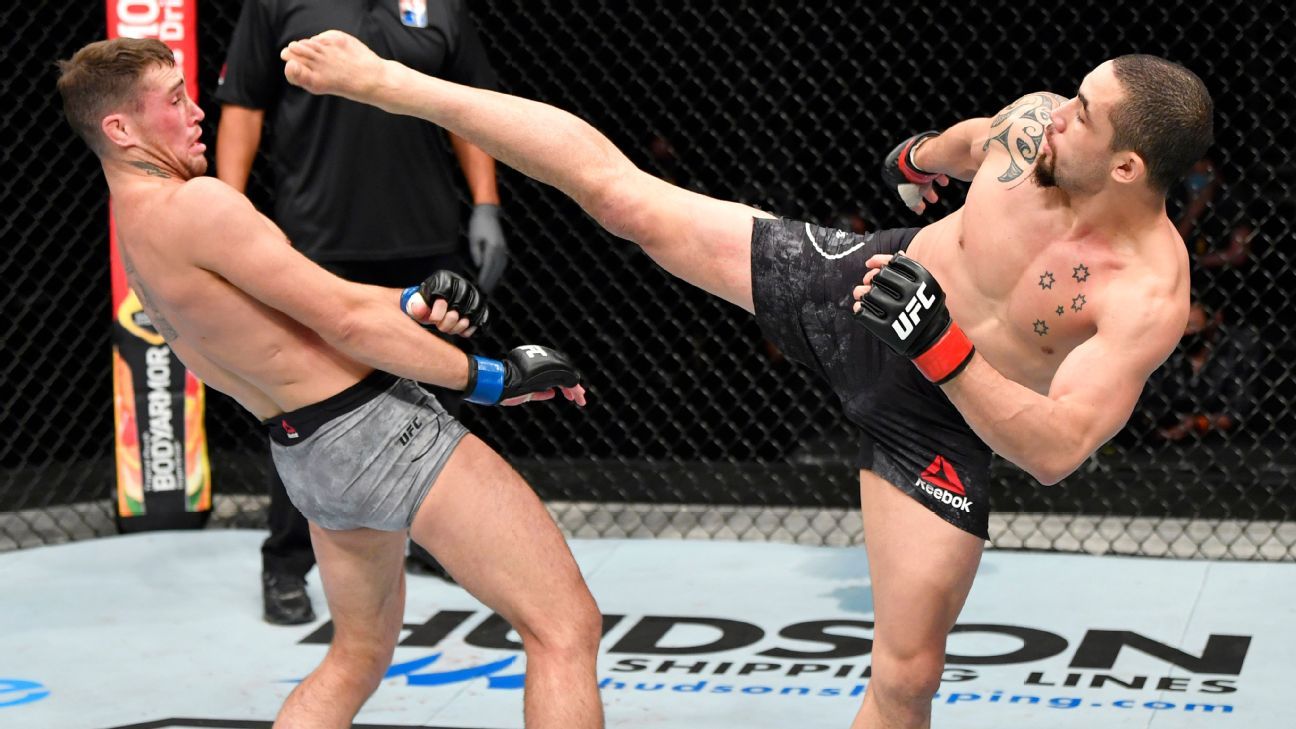 The former champ is back on a winning track.

Robert Whittaker edged out Darren Till via unanimous decision (48-47, 48-47, 48-47) in the main event of UFC Fight Night on Saturday in Abu Dhabi. Till dropped Whittaker in the first round, but Whittaker rallied beginning in a huge second to get the nod in a very close fight.

“My brain is on overload,” Whittaker said in his post-fight interview. “That fight was so stressful. Honestly, I hope the fans and everybody can appreciate it. For me, it was one of the most technical fights I ever had to fight.”

The bout had a lot of significance in the UFC’s middleweight division. Coming in, ESPN had Whittaker, the ex-champ at 185 pounds, ranked No. 2 and Till ranked No. 6 in the world at middleweight. It was a chess match between a counter striker in Till and Whittaker, a fighter who likes to blitz in from distance.

The bout took place at the recently constructed Flash Forum, inside a “safe zone” on Yas Island, which the UFC has dubbed “Fight Island” for its July slate of events. This was the fourth and final UFC event in Abu Dhabi this month. The first was UFC 251 on July 11.

For Whittaker himself, it was a crucial victory. He had not fought since dropping the title to Israel Adesanya at UFC 243 last October. Early this year, Whittaker took a brief sabbatical from training and pulled out of a fight with Jared Cannonier due to being burned out on MMA. “The Reaper” looked refreshed and loose Saturday night.

Till knocked Whittaker down with an elbow in the first round. It appeared Whittaker was in trouble and he was unable to get into a rhythm for the rest of the round. Till seemed to be in the driver’s seat. But Whittaker came back in the second by dropping Till with a big right hand. From top position, Whittaker landed hard elbows. Till was able to get up, but not without blood coming from his nose.

That seemed to turn the momentum of the fight. Whittaker had another strong round in the third when his calf kicks started to add up. There was visible reddening on Till’s right leg.

“He was countering me so hard,” Whittaker said. “He was very heavy on his feet, he was very planted. Obviously when someone is very planted, you’ve gotta kick away. To his credit, he didn’t fall for that trap. He took the damage and I took those points.”

Till mounted his own comeback in the fourth. He wobbled Whittaker with another elbow. Whittaker was looking for takedowns late, but Till was able to stuff them. In the very close fifth, Whittaker landed two grazing left hands off of the separation from a takedown attempt. Till opened up a huge cut on Whittaker’s ear with an elbow. There was a ton of blood, but it didn’t seem to affect Whittaker, who finished the fight with a takedown.

Whittaker (21-5) was on a nine-fight winning streak before losing the belt to Adesanya. The New Zealand-born Australia resident became the first Aussie to ever win a UFC title when he beat Romero for the interim belt in 2017. Whittaker, 29, went on to become undisputed champion when Georges St-Pierre vacated the title following his win over then-undisputed champ Michael Bisping.

Till (18-3-1) moved up to middleweight from welterweight to beat Kelvin Gastelum at UFC 244 last November. The England native had lost two straight before that, to Jorge Masvidal and Tyron Woodley in a welterweight title bout. Till, 27, was undefeated before falling to Woodley. He has now lost three of four.