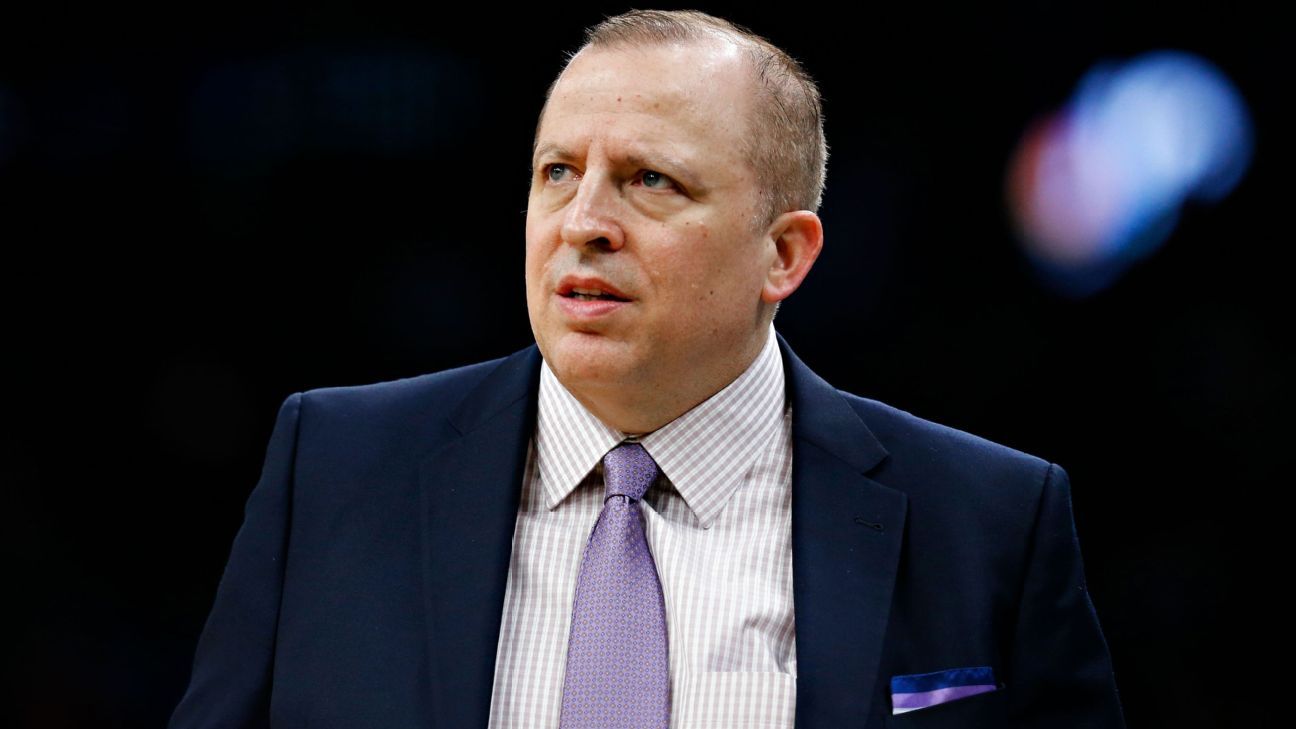 Note: This article was originally published on December 12, 2019. It has been updated to reflect the selection of Tom Thibodeau on July 25, 2020.

The New York Knicks have found their next sideline leader, and it’s someone who has plenty of history with the team.

Sources tell ESPN that the Knicks and Tom Thibodeau are finalizing a five-year deal to make him the franchise’s next coach. Thibodeau previously served as a Knicks assistant coach, most notably under Jeff Van Gundy, from 1998-2004.

The hiring of Thibodeau comes after the franchise dismissed David Fizdale as head coach 22 games into the season, amassing a 4-18 record.

It isn’t so much that the Knicks have made “bad” hires but rather that they have turned to ill-fitting, quick-fix choices who haven’t had enough time to see any transformation show up on the court. For the Knicks front office, the hope is that Thibodeau will be the coach capable of turning it around.

From Mike D’Antoni to Mike Woodson to Derek Fisher to Jeff Hornacek, here’s a quick look at the Knicks’ head-coach graveyard from the past decade:

MORE: How the Knicks got into this mess, in their own words

Sandwiched between his tenure as mastermind behind the Phoenix Suns‘ “Seven Seconds or Less” offense, a failed two-year stint with the Los Angeles Lakers and his current run with James Harden and the Houston Rockets, D’Antoni was brought in to be the offensive guru for a Knicks team that had just endured a 23-59 season under then-head coach and team president Isiah Thomas.

D’Antoni won a total of 61 games during his first two seasons at the helm but managed to make the playoffs in 2011 after the franchise traded for Carmelo Anthony at the trade deadline. New York was swept by the Boston Celtics in the opening round, D’Antoni’s only playoff appearance as coach of the Knicks.

In total, D’Antoni coached Anthony for parts of two seasons before resigning in March 2012 after the Knicks went 18-24 to start the season. D’Antoni told ESPN in 2017 that he “quit” his job with the Knicks after Anthony gave the team an ultimatum.

“[The Knicks] gave away half the team [in the trade for Anthony] and everybody expected us to win a championship; it really wasn’t realistic,” D’Antoni told USA Today Sports in 2018. “It put a lot of pressure on everybody, and it kind of burst the pipes.”

The early days of Woodson’s tenure were promising. After being elevated from interim coach after D’Antoni’s resignation, he guided the Knicks to a 54-win season and a division title, which catapulted New York to its first playoff series win in 13 seasons. In fact, Woodson is the only coach since Jeff Van Gundy (1996-2001) to boast a winning record during his tenure as Knicks coach.

“Obviously, there are some great coaches out there that, had we opened up the search, would have been called. Namely Phil Jackson, who was the most successful coach in the NBA history. We felt Woody was our guy and he showed it during the season and in our discussions after the season.”

But by the end of the 2013-14 season, Woodson’s firing was all but inevitable. The team got off to a 3-13 start, and although the season started to look slightly more promising in March, it was too late. The Knicks went 37-45 and failed to make the playoffs. Woodson’s entire coaching staff was also dismissed … by Phil Jackson, who had signed on as Knicks president one month earlier.

Fisher was brought in by Jackson in June 2014. The two had also been together with the Lakers, with Jackson the coach and Fisher playing point guard. The pair had won five championships together, but history would not repeat itself in New York.

Fisher struggled to transition from player to coach, with more than one troubling incident during his tenure, most notably Fisher and Matt Barnes getting into an altercation in 2015 when Barnes found out that Fisher was having a relationship with Barnes’ estranged wife. The NBA subsequently opened an investigation into the fight between the two men. On the court, Fisher failed to strongly enforce a triangle offense — Jackson’s preferred style of play.

At the time of Fisher’s firing, the Knicks had dropped nine of their past 10 games and were on a five-game losing streak. He was axed after the Knicks’ 23-31 start to the 2015-16 season, two years into a five-year, $25 million deal. Kurt Rambis took over as interim coach for the final 28 games and went 9-19.

Hornacek was hired to be the next steward of Jackson’s signature triangle offense. With Kristaps Porzingis budding into a star, the Knicks had playoff aspirations. Things quickly changed.

By the time Hornacek was fired, the organization looked completely different than it had when he was brought in two years earlier.

Jackson was dismissed as the Knicks’ team president in June 2017. Longtime face of the franchise Anthony was traded in September 2017. Porzingis suffered a season-ending left knee injury in February 2018 and never played another game for the team.

One month before that injury, Hornacek and veteran center Joakim Noah got into a physical altercation during a practice. As a result, Noah was kept away from the team for the rest of the season.

Hornacek was told his services were no longer needed in a conference room at the Westchester County Airport at 2 a.m. after the flight home from the last game of the season.

The Fizdale era was supposed to be a period of patience.

Knicks GM Scott Perry and President Steve Mills interviewed 11 coaches and decided to appoint Fizdale. At the introductory news conference, Perry said they selected Fizdale because he is a “tireless worker, innovative basketball mind, someone who connects with people … someone who holds others accountable.” In the years leading up to Fizdale’s hiring, the Knicks had struggled with accountability and with building an environment that fosters connectivity.

Perry and Mills acknowledged that the Knicks had previously been an impatient organization hastily slapping together short-term fixes rather than properly wading through the rebuild process.

Fizdale inherited a team that was fractured. Hornacek’s tenure was synonymous with clashes between Porzingis and Jackson, trading away Anthony and Porzingis getting hurt. Fizdale — who had built a reputation as player-friendly — was charged with fixing that.

Ultimately, Porzingis was traded. Despite finishing with a league-worst 17-65 record, the Knicks did not get the No. 1 pick in the 2019 draft and therefore missed out on the opportunity to draft Zion Williamson. The Knicks also struck out on signing top-tier 2019 free agents Kevin Durant and Kyrie Irving.

Instead, the front office zoomed to spend almost $70 million during a 24-hour period to kick off free agency, evaporating any roster flexibility. Once again, impatience prevailed.

League sources told ESPN’s Bobby Marks that the Knicks were determined to use their cap space to sign players who could contribute on the court rather than engage in any deal that would give them future draft assets.

Ultimately, the roster construction proved faulty, the Knicks fell short of their already-low expectations and Fizdale took the fall.