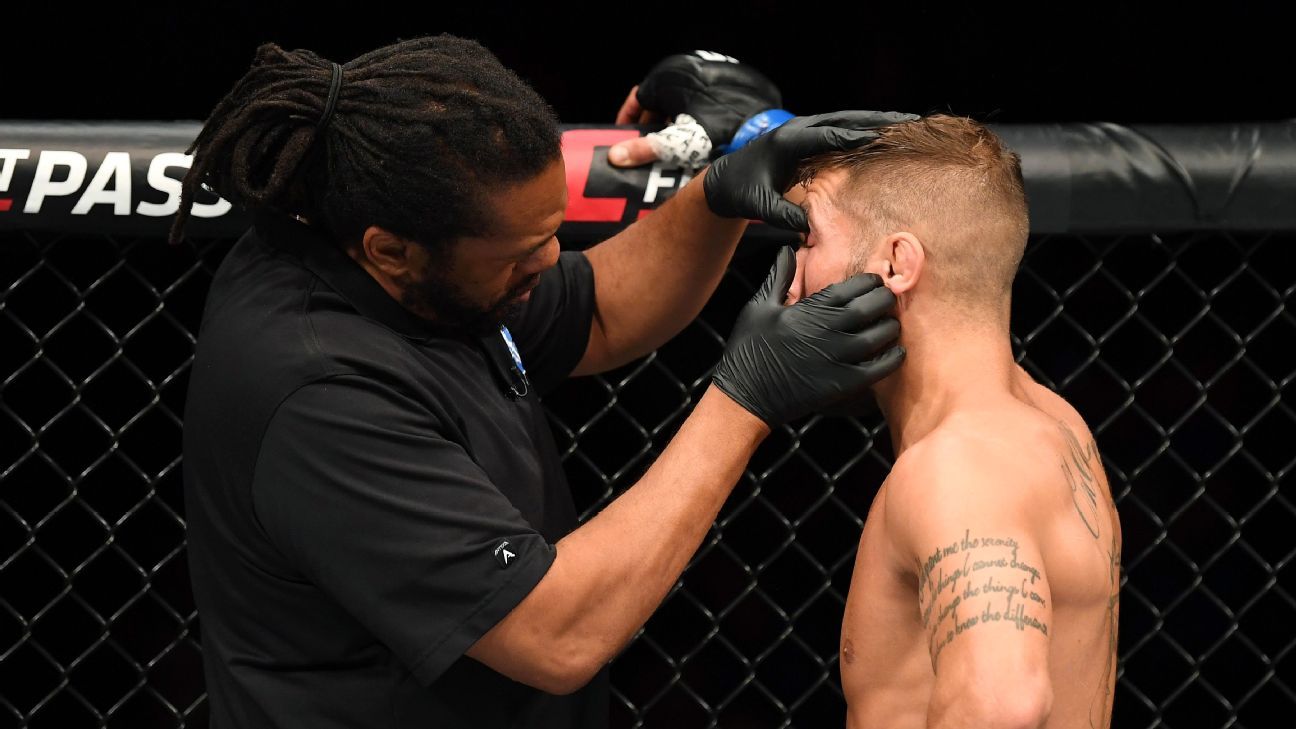 After a controversial stoppage at Saturday night’s UFC event in Abu Dhabi, the referee and commentator involved in a postfight confrontation are defending themselves.

After referee Herb Dean left the Octagon following a prelim bout between Francisco Trinaldo and Jai Herbert at UFC Fight Night: Whittaker vs. Till, he appeared to get into an argument with UFC color commentator Dan Hardy. Video and photos afterward captured Dean and Hardy in somewhat of a verbal altercation.

On the broadcast, Hardy was admittedly extremely upset about what he felt was a late stoppage by Dean, saying that Herbert was allowed to take too much damage from Trinaldo. In a video released Sunday on his Instagram, Dean said it was “by no means” a late stoppage and Hardy screaming “stop the fight!” while the bout was still going on could have been a “dangerous” act in a silent arena.

In the third round of the bout, Trinaldo knocked Herbert down with a punch. Trinaldo ran over to throw follow-up punches with Herbert on the ground, but hesitated, seemingly thinking Herbert was done and the fight should be over. Dean, who was standing over the two men, waited for Trinaldo to throw several more follow-up shots before calling the bout and ruling it a TKO.

Hardy, as well as many others, thought Dean should have ended the bout after the initial punch, saying that Herbert was knocked out and clearly not intelligently defending himself. He made his feelings known loudly on the broadcast.

Hardy wrote Sunday on Twitter that it was Dean who approached him after the bout was over.

In his video Sunday, Dean explained that he could hear someone yelling “stop the fight!” while the action was continuing. The referee said there are only two people authorized to advise him on when the bout should end: the ringside physician and a fighter’s corner person.

In an empty arena without fans, which has been the new normal during the coronavirus pandemic, the fighters and referees can sometimes hear the broadcasters who are seated cageside. Dean implied that was the case Saturday.

“This is a very dangerous thing to do,” Dean said of someone screaming to stop the fight. “If you put on your Superman shirt and decide that you’re the smartest person in the room — smarter than the physician and smarter than the corner who works with the guy and smarter than the referee — [there’s a] chance you could bring in information that could do the fighter a disservice. I’m looking at the match. I believe I’m getting information from the people qualified to do it. Under no circumstances would I, even as a referee, get up and yell and tell another another referee to stop the match. If I were to do that, I would know it would be a situation where I couldn’t live with myself otherwise.”

Dean added that he would post another video in the future explaining what a referee looks for in a sequence were a fighter is clearly hurt and the bout could be called at any moment. But Dean said referees are looking at a fighter’s actions, including if their eyes are tracking their opponent, if they know where the opponent is, if they’re putting their arms and/or legs up to defend and is their head is off the mat. Dean said Herbert was “doing everything I could ask for him to do to stay in the fight.”

“It’s easy,” Dean said of his call. “Anyone who believes it’s not is maybe just following because somebody with a microphone says it should have been stopped. … That wasn’t a bad stoppage.”

Hardy, a retired fighter himself, wrote Sunday on social media he’ll always speak his mind and “it’ll always be backed by what I feel in my heart.” Hardy wrote that he felt it was Dean’s second late stoppage of the night and “twice in a night is clear negligence, in my opinion.”

“The referee’s job is more important than any other person in the building,” Hardy wrote. “It is on their shoulders to protect fighters from getting seriously hurt when they are unable to protect themselves. … When I make a mistake, I look stupid on live TV. When a referee makes a mistake, people are left vulnerable and can be seriously damaged.”

UFC senior vice president David Shaw said in the postfight news conference that the UFC could address the incident between Dean and Hardy, adding that only those in the group run by UFC regulatory head Marc Ratner “are able to talk to officials during the fight night.” Dean is one of the most respected referees in the world, Shaw said, and Hardy is a decorated and fiery former fighter and analyst.

“The important thing for us to do is to try and get a handle and try to get an understanding of what actually happened,” Shaw said. “Obviously, this is not something that you address with either one of the parties during the show. These guys have a job to do, and so we certainly don’t want to disrupt their efforts to do an excellent job, as we expect they always will. So we’ll go back, we’ll check it out, try to get a better understanding of what happened and really take it from there.”