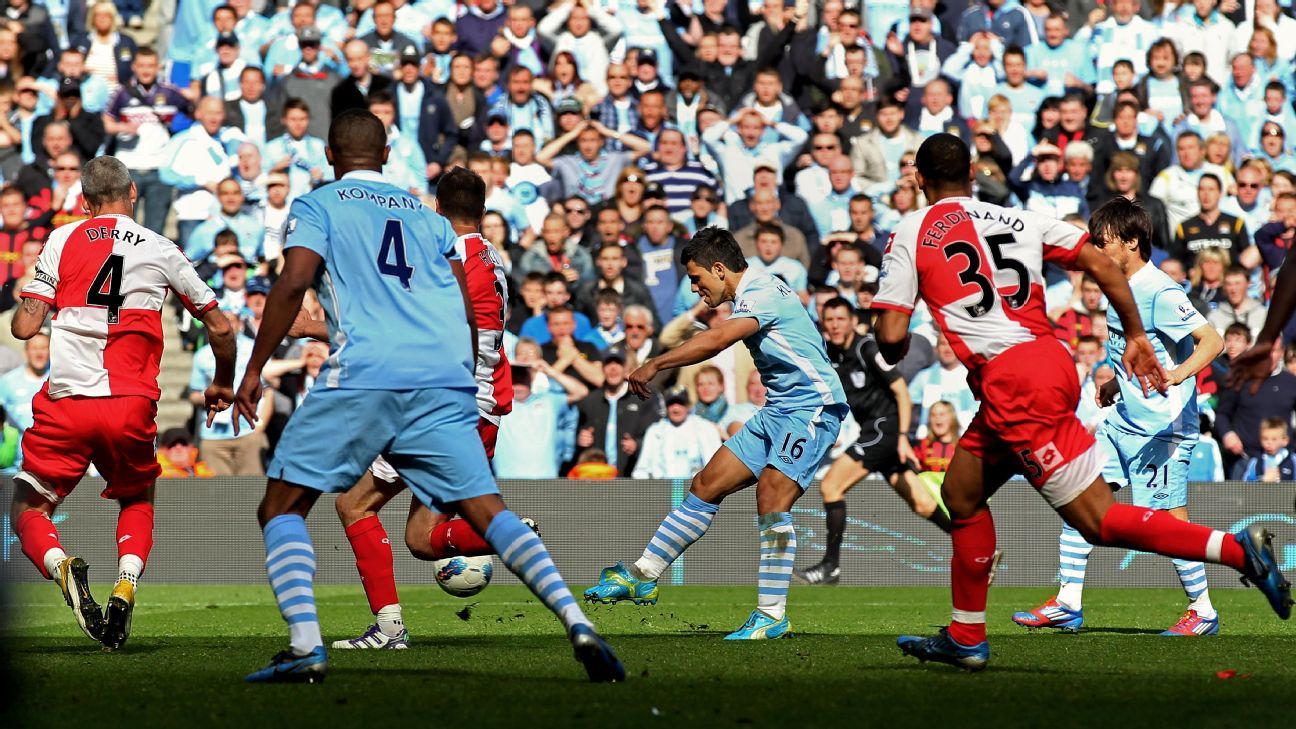 It has taken a little longer than usual, but the final day of the Premier League season is almost upon us on the unexpected date of Sunday, July 26.

Just for context, that is two weeks after the Euro 2020 final was originally scheduled to have been played, and just 13 days before the 2020-21 Champions League qualifiers begin.

Of course, the title was wrapped up by Liverpool in what seems like an eon ago, but there is still a lot to play for, with European qualification and relegation spots in flux heading into the last round of fixtures.

Drama on the final day has been delivered more often than not over the years, with championships seized, glory snatched from the jaws of defeat (and vice versa) and chaotic results aplenty.

Here, in no particular order, are 10 of the most memorable moments from the Premier League’s final day.

Manchester City‘s vastly superior goal difference meant that all they had to do was beat Queens Park Rangers on the final day of the 2011-12 campaign to end the club’s arduous 44-year wait for a league title.

Roberto Mancini’s side had even won their previous five matches to ensure that the championship was in their hands, but with just four minutes of the entire season remaining, they were trailing 2-1.

To make matters worse, this also meant that rivals Manchester United (who won at Sunderland) had risen to the summit in their stead.

What followed was a bewildering power shift, as seismic goals from Edin Dzeko and Sergio Aguero (renamed “AGUEROOOOO” for the day by commentator Martin Tyler) thrust City back to the top on goal difference as the very last grains of sand fell through the egg timer of fate.


After 1,500 games at the helm, Sir Alex Ferguson relinquished the Manchester United reins on an emotional day at the very end of the 2012-13 season.

With the title already won, Fergie’s final outing — a trip to The Hawthorns to face West Bromwich Albion — looked to be going swimmingly as United raced into a 3-0 lead.

However, the game soon slipped away from its moorings and eventually ended up a dizzying 10-goal barnstormer as the Baggies scored thrice inside the last five minutes to earn a draw.

Steven Gerrard is another Premier League club legend whose final game didn’t quite go according to plan.

With a move to LA Galaxy in the works, captain Gerrard brought his long and illustrious Liverpool career to an end with an absolute nightmare of a result against Stoke City.

He did manage to score on his 710th appearance for the Reds — the problem was that the Potters did too, six times.

Quite a memorable win against Spurs #OTD in 2006… 😉 pic.twitter.com/KNJCZuoAPK

In 2005-06, Tottenham Hotspur had occupied fourth place for the majority of the second half of the season and thus looked odds on to secure Champions League qualification heading into the final day.

Unfortunately, Spurs hadn’t counted on a virus sweeping through the squad and laying their European dreams to waste ahead of their match against West Ham United. While rumours that the mass sickness was due to food poisoning from a dodgy hotel buffet were ultimately disproved, the debacle will forever be known as “Lasagne-gate.”

With several of Martin Jol’s players undermined by their own digestive systems, the Hammers went on to win 2-1, thus handing fourth place to Arsenal, who beat Wigan Athletic at Highbury to leapfrog above their beloved neighbours (more on that in a moment).

– Left to play for in the Premier League | Race for Europe
– Stream ESPN FC Daily on ESPN+ (U.S. only)
– What did you miss? The latest from Europe’s top leagues


With West Ham holding Spurs at 1-1 across town, it looked like Arsenal were about to blow their chance to steal a top-four spot as they found themselves 2-1 down against Wigan in what was supposed to be a grand farewell to their ancestral home of 93 years.

Thankfully for the Gunners, they were able to count upon Thierry Henry, whose timely hat trick ensured that the club would be sending 38,000 fans home from the stadium for the very last time on the back of a win.

The fact that the result also saw Arsenal nick Champions League qualification from right under the noses of their archrivals was probably a fairly enjoyable bonus for them too.


There were just 10 days between Manchester United wrapping up the 1998-99 Premier League title and the completion of their historic Treble with triumphs in the FA Cup and Champions League finals.

It all began with a 2-1 win over Tottenham on the final day of the league season to clinch the first of their three trophies, having begun the afternoon just one point in front of Arsenal.

Little over a week later, they had attained true footballing greatness via a pit stop at Wembley, where they beat Newcastle 2-0, and that last-gasp win over Bayern Munich on a balmy night in Barcelona.


Arguably the strangest final day scoreline came at the conclusion of the 2007-08 season when Middlesbrough played host to Sven-Goran Eriksson’s City.

Eriksson was swiftly relieved of his position in the aftermath, presumably as allowing Afonso Alves to score a hat trick against you in any capacity constitutes grounds for immediate dismissal.

#OnThisDay in 2010…@didierdrogba scored a hat-trick to seal the #PL 🏆 for Chelsea with an emphatic 8-0 victory pic.twitter.com/0YUFOWkjj7

Another bonkers result from the final day came in 2009-10, when Carlo Ancelotti’s Chelsea laid claim to the title by rendering Wigan well and truly asunder.

The Blues began the day just one solitary point above second-placed Manchester United in the pile, knowing that a win would be enough to propel them over the line. And win they most definitely did.

Indeed, the soon-to-be-champions truly lashed the Latics, with Didier Drogba helping himself to a merciless hat trick as he and his colleagues also set a record for most goals scored in a Premier League season (103) in the process.

Proving that some of the best final day drama occurs at the bottom of the table, it was Carlos Tevez who controversially took the headlines when West Ham slithered free of relegation at the very last knockings in 2006-07.

Poised on the precipice, the Hammers travelled to Old Trafford to face Man United, the newly crowned champions, in their last game knowing that nothing but a win would do.

Having been the subject of controversy all season due to his third-party ownership and questionable transfer to West Ham the previous summer, Tevez duly scored the only goal of the game to ensure his side stayed up on goal difference at the expense of Sheffield United.

To keep a long story short, two years of sour legal arbitration followed, after which the Hammers were made to pay the Blades £20 million in compensation.

Only one team have ever been bottom of the Premier League on Christmas Day — and bottom of the league at half-time on the last day of the season — and still avoided the drop. Step forward, West Brom’s class of 2004-05.

Southampton, Norwich, Crystal Palace and the Baggies were all in danger of relegation with one round of matches remaining and Bryan Robson’s team did their bit. After beating Portsmouth 2-0, though, there was a nervous wait at the Hawthorns as results began to filter in from elsewhere.

Southampton lost to Man United and Norwich were tanked 6-0 by Fulham, but it was Charlton Athletic‘s 82nd-minute equaliser in a 2-2 draw against Crystal Palace that proved crucial for West Brom.

Not only was it a miracle, but it also made a bit of a mockery of one of the oldest and deeply held Premier League maxims. Bottom at Christmas? There is still hope, but only if you have Geoff Horsfield to bring off the bench in your hour of need.