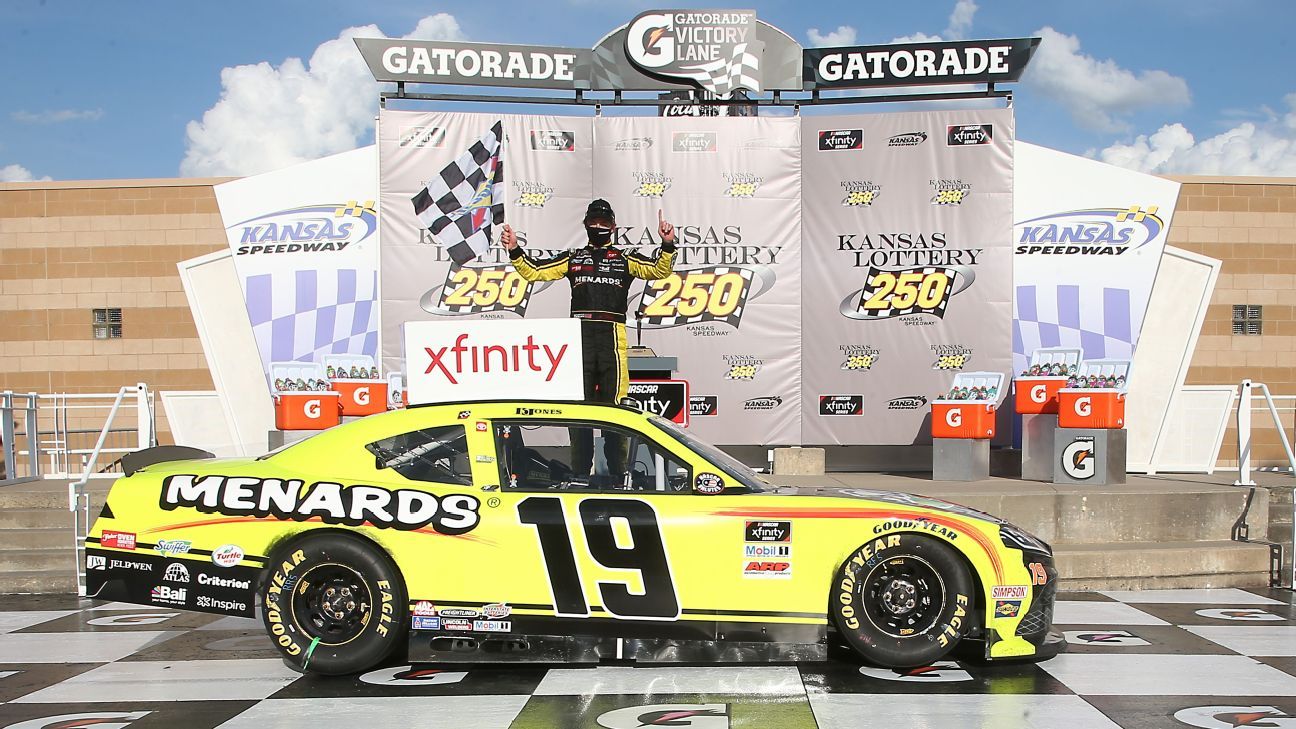 He knew exactly what to do when he stepped in his Xfinity ride.

The 23-year-old Jones came roaring around the outside of Austin Cindric on the second attempt at a green-white-checkered finish on Saturday, then won the race to the finish line for his third career victory. Jones also won earlier this year at Phoenix and captured last year’s race at Kansas, though it might have been the last 24 hours that were more helpful.

With no practice or qualifying, many Xfinity drivers hadn’t been on the track this weekend. But Jones ran the Truck Series doubleheader on Friday night and earlier Saturday, giving him a little extra knowledge that he put to good use.

“It’s been a long two days. I feel exhausted. The heat is a big thing here,” said Jones. “Looking forward to celebrating back in victory lane.”

Cindric had won both of the early stages, and he looked like he would tie Sam Ard‘s series record with his fourth consecutive Xfinity win. Instead, Cindric wound up second after leading 131 of 175 laps in an otherwise dominant performance.

“Man, so close,” Cindric said. “Obviously, a great points day, and now we’ll just have to go to Road America.”

Harrison Burton was third after it appeared he too had the win locked up. Burton had built a huge lead over Cindric with three laps to go after a long green-flag run, but a caution flag caused everyone to pit. Burton’s team had a much slower tire change than its Team Penske rival, and that put him playing catch-up when the race went to overtime.

Burton wound up trapped behind Ryan Sieg, who chose not to pit and was on old tires, and never got a chance to race for the lead on the first try. Burton got a do-over when a wreck occurred in Turn 1 deep in the field on the restart, but he still couldn’t get enough momentum on the second attempt at a finish to push to the front.

Sieg’s gamble for track position paid off, and he finished fourth. Ross Chastain, who also ran the Truck Series race Friday night but gave up his ride to Travis Pastrana on Saturday, rounded out the top 5.

“It was a huge struggle on the restarts,” Sieg said. “I messed up on the first one, and luckily I could hang on the second one. It was a great call. We were probably going to be 10th or 11th, but it was a good call there at the end.”

Cindric spent the entire race running near the front, just as he did in sweeping the doubleheader at Kentucky and winning last week at Texas, where Kyle Busch had his car disqualified and that moved Cindric up one spot into first place.

The 21-year-old Cindric started outside Row 2 but quickly moved around Jones for the lead, and Cindric wound up leading 30 of the 40 laps in winning the stage. Cindric also dominated the second stage, though Jones gave him a run in the closing laps, to secure another playoff point that could help him navigate the postseason.

“Every time this car shows up at a race track,” Cindric said, “I’m ready to go and ready to contend for a win.”

The fourth consecutive 1½-mile track for the Xfinity Series was a challenge all day for Noah Gragson, who was third in points behind a pair of wins but couldn’t get his car right. Gragson wound up finishing 15th.

Chastain and Michael Annett, who started on the pole, had long top-10 streaks in jeopardy when they were running ninth and 10th with 20 laps to go. Chastain ran his streak to 10 and Annett finished eighth to extend his to six.