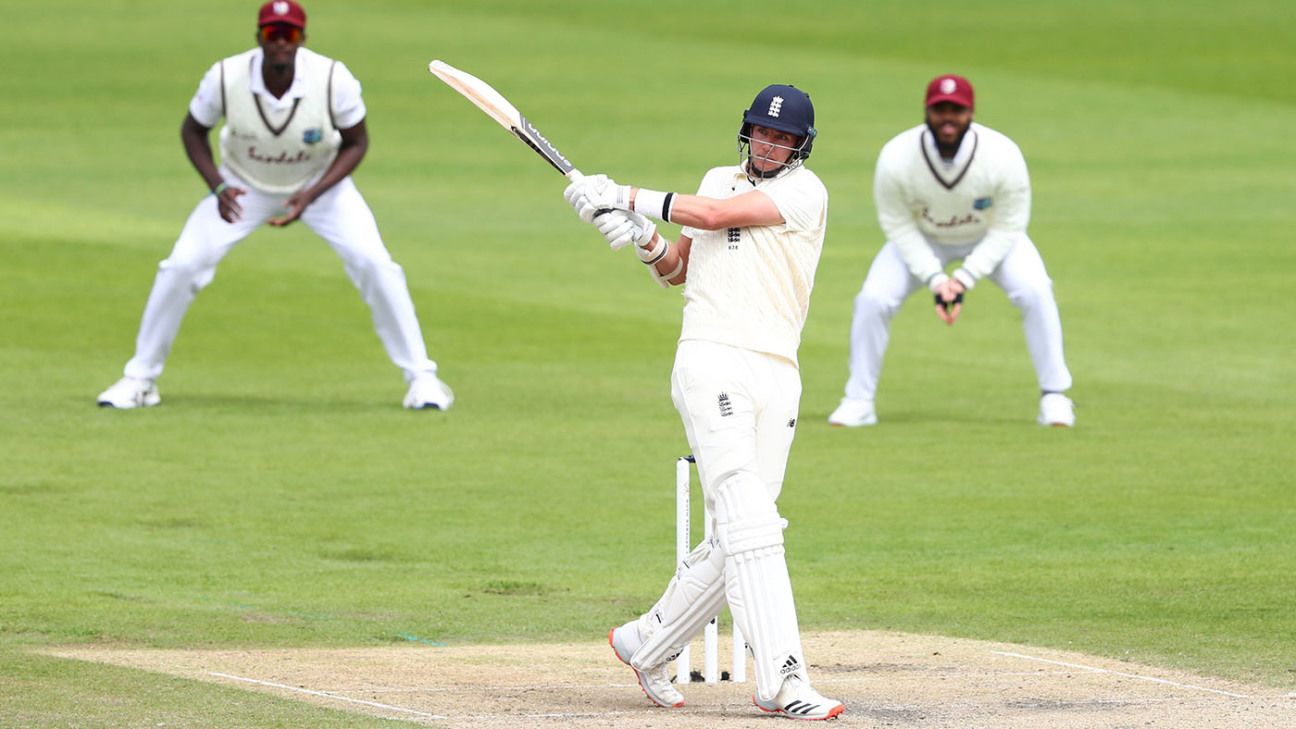 Stuart Broad has said that his recent upturn in form with the bat stems from a decision to ditch the reticence and be more like Shane Warne at the crease.

Speaking to Sky Sports after a rampant innings of 62 from 45 balls had helped put England in command of the third Test against West Indies, Broad credited Peter Moores, his former England coach and current mentor at Nottinghamshire, for suggesting a technical tweak that has helped him make a virtue of his reluctance to stay in line against quick bowling.

“It was good fun,” Broad said. “I was trying to take the bowlers off the top of off stump because we saw the pitch was nipping from length. So I wanted to strike the ball and move the scoreboard forward. It’s probably just over par as a first-innings score on this pitch, because we’ve seen the nicks are carrying to the slips a bit better [than in the second Test].”

Broad’s batting was once good enough to raise the prospect of him becoming a permanent fixture at No. 7 or 8 in England’s order. His highest score was a remarkable 169 against Pakistan at Lord’s in 2010, and by the start of 2012, had scored nine further half-centuries in his first 43 Tests at an average close to 30.

But Broad’s form nosedived in 2014, when he was hit in the face by a bouncer from India’s Varun Aaron during the fourth Test against India at Old Trafford. Since that injury, his average has been in the low teens, and he has frequently come in at No. 11 in the past 12 months, including last week’s second Test against West Indies.

However, neither Broad’s eye for the ball, nor the power in his long levers has been diminished since the Aaron incident, and on the second day of the series decider, he proved that with an innings that was as freewheeling as it was vital, helping England recover from a dicey 280 for 8 to 369 all out.

“Mooresy came to me at the start of June and basically said: ‘Look at how Shane Warne played’,” Broad said. “Particularly in the ’05 Ashes when he scored some really useful runs. He was quite unorthodox, opening up different parts of the field, and so I did a bit of research as to how he went about it and decided that was quite a good way for me to go.”

Back in that 2005 series, Warne was one of the batsmen who held up England’s charge on the final day of their two-run victory at Edgbaston, but his most significant innings was arguably a free-flowing 90 from 122 balls in the drawn third Test at Old Trafford – when his counter-attacking on the rain-affected third day saved Australia from the follow-on, and may ultimately have saved the match.

Broad’s intercession in this contest came at a similarly significant juncture, with England’s innings in some disarray after a superb first hour for West Indies. With Shannon Gabriel and Kemar Roach in the wickets, they had claimed 4 for 32 to leave England in danger of squandering a hard-fought first day. But from the moment Broad connected with a fourth-ball pull for six, he sensed it was going to be his day.

Continuing in that vein, Broad charged to a 33-ball half-century that was England’s third-fastest in Test history – only Ian Botham (twice) has gone quicker. And, having played a similarly carefree innings alongside Mark Wood at Johannesburg in January, he has lifted his batting average for 2020 to 42.00, at a rampant strike-rate of 118.86.

“It’s strange in this bio-secure environment,” he said. “As bowlers, we’ve not really had much match practice with the bat, but in one of my last Test innings at the Wanderers I played in this style and really enjoyed it. I just tried to think back of how that went, because I didn’t really have any much practice to rely on.

“I’ve done a couple of tactical and technical things with Peter Moores back at Notts, which has helped me set up a better gameplan and I stuck to that today. I like going through the off side, so I was trying to keep my head out of the way, instead of falling over to bring in the lbw.

“I think I’m at my best when I’m just striking the ball,” he added. “But one thing I’ve done recently is try and keep my head much stiller.

“As soon as the eyes start moving on delivery, everything feels much quicker and harder, so the work I’ve done recently to be as still as possible when the ball’s released, which gives you the best chance of striking it.

“It’s really hard to tell in the nets, you need match practice at it, but felt really comfortable today, having a clear gameplan of what to do,” he added. “And I think the situation helped today. It was not one of those situations to try and hang around for two hours and see where we went. I’m not someone who’s going to be able to leave loads of balls and bat 100 balls for 20. I want to be able to score and those situations like today suit me really.”

Broad may have been England’s main source of momentum, but he paid tribute to his partner Dom Bess, who was left not out on 18 from 55 balls after a diligent and frill-free stay at the crease.

“It was great to be batting with Bessie, he did brilliantly,” Broad said. “It can be tricky when someone’s playing like a headless chicken and you can lose your gameplan at the other end. But he did beautifully to continue with his style, and to be there at the end.”

Broad did, however, have two regrets at the end of his highest Test score since the Trent Bridge Ashes Test in 2013. Firstly, that he missed out on challenging Botham’s record for the fastest England half-century (28 balls) – “I shouldn’t have slowed down at the end,” he joked, “I shouldn’t have started knocking ones.”

And secondly that his innings ended in a relatively tame fashion, as he became the latest victim of West Indies’ unlikely bowling star of the series, Roston Chase.

“Batting is such a frustrating, weird thing,” he said. “If you told me this morning I’d get 10, I’d be pretty happy. I’d probably have shaken your hand and taken it. You end up getting 60 and you start kicking the ground that you’ve not got 70. It’s great to have got 60 but I’m actually annoyed I hit a full toss to midwicket now.”