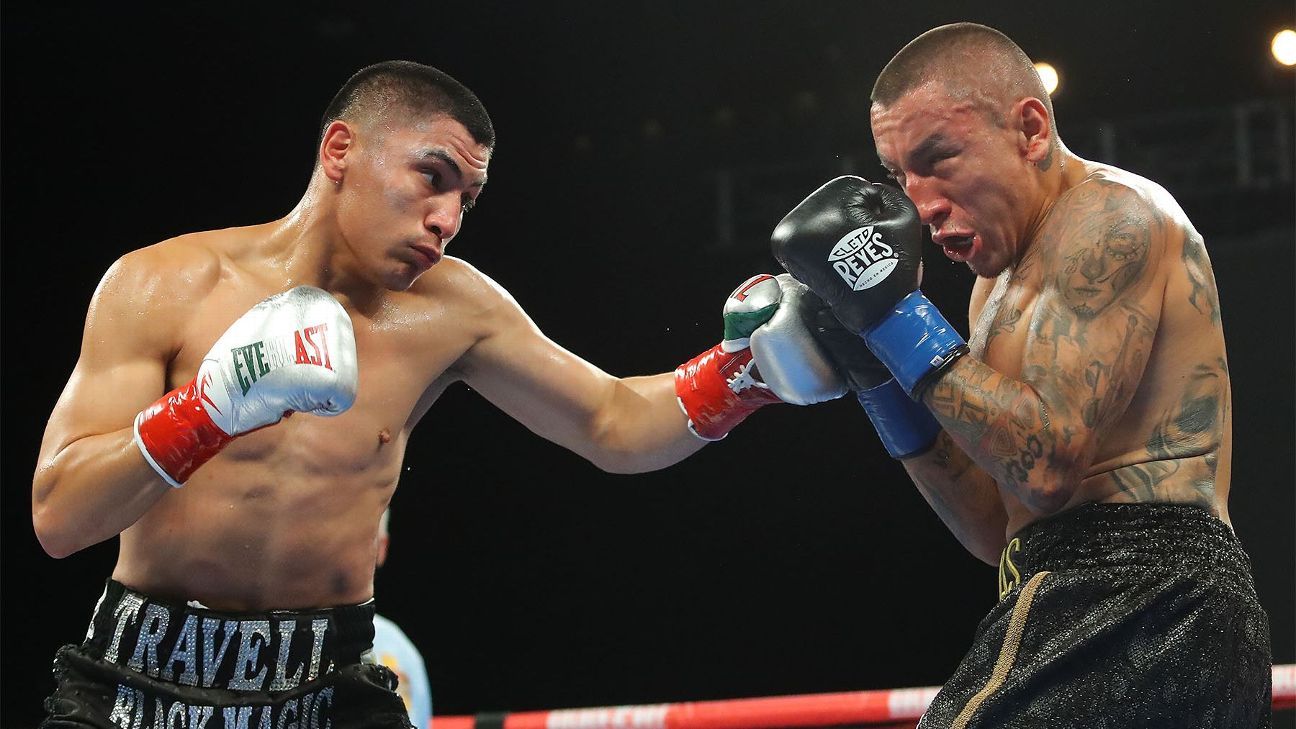 Vergil Ortiz Jr. put together a dominating performance and stopped Samuel Vargas in the seventh round in the main event of a DAZN card Friday night at the Fantasy Springs Resort Casino in Indio, California.

With the victory, Ortiz (16-0, 16 KO), 22, took another step toward becoming a welterweight contender. He exhibited a complete skill set and proved he’s more than just a one-dimensional slugger.

“I hit him to the body a lot. I don’t know how he didn’t go down. He was hurt the entire time — I asked him,” Ortiz said. “I knew it was time to take him out. If it went to eight rounds he would have been hurt worse.”

From the beginning, Ortiz took control of the fight behind his powerful left jab, bloodying Vargas’ nose. Ortiz began to layer his attack with quick right hands over the top that stunned Vargas in the third.

Then in the fourth, Vargas (31-6-2, 14 KOs) was hurt by a series of quick punches that seemed to come in all directions as Ortiz appeared to look for an early finish. Vargas survived the attack, but the punishment he absorbed was such that referee Jack Reiss called the ringside physician to look over him at the end of the third.

Vargas did his best to stay active in the next couple of rounds, throwing shots on the inside, but most of his punches were blocked by the tight guard of Ortiz. In the seventh round, Vargas was stung by another steady two-fisted barrage from Ortiz.

If it wasn’t right hands, it was left hooks or right uppercuts that seemed to hurt Vargas. They came at a more rapid pace as the round went on. All the while, Ortiz’s laser-like jab had been snapping back Vargas’ head throughout the night.

As Vargas took a steady pounding, Reiss mercifully waved things off 2 minutes, 58 seconds into the round.

It was a big win for Ortiz, as Vargas is an experienced pro fighter who previously had been stopped only twice, by unified welterweight titlist Errol Spence Jr. and two-division titlist Danny Garcia.

Ortiz said he’d grade his performance against Vargas a B-plus.

“He brought it out of me — hardest opponent to date,” he said. “My hands took a beating punching him the whole time, so when they’re healed I’ll be back.”

Ortiz said he would like a step up in competition, naming Garcia and former welterweight titlist Keith Thurman as opponents he’d like to fight next.

“They’re good opponents I can beat,” he said. “I want to take risks. I’m not here to take easy fights. I’m in the hardest division in boxing, so when I win a title it will mean a lot more.”

Mosley, the son of Hall of Famer Shane Mosley Sr., used his speed to outbox his foe from the outside, and then beat him down the middle with quick two-punch combinations. Ramos (11-9, 4 KOs) never consistently threatened Mosley, landing only sporadic punches.

The victory was the third consecutive for Mosley (16-3, 9 KOs) since losing to Brandon Adams in the finals of The Contender series in November 2018 at the Forum in Inglewood, California.

As the opening bell rang, Estrada (19-0, 8 KOs) stunned Adkins immediately with a three-punch combination, then followed with another four-punch salvo, punctuated by a left hook that sent Adkins to the canvas.

“It was the outcome I expected,” Estrada said. “I give her respect for stepping into the ring with me while having a 5-0 record. If it weren’t for her, I probably wouldn’t have had an opponent tonight, so I thank her. Hopefully next time I can fight someone who is a world champion.”

It takes Seniesa Estrada seven seconds to knock out Miranda Adkins in their bout on DAZN Friday night.

Adkins (5-1, 5 KOs), who was a late replacement for Jacky Calvo, who suffered a knee injury, came into Friday’s fight undefeated, but four of her wins came against opponents making their pro debut and the other came against one who was winless in two fights.

“I give Adkins so much credit because she stood up and took the fight,” Estrada said. “Due to the COVID situation we tried to get current champions, former champions, and Miranda was the only one who stepped in to take the fight. I had more experience than her in the professionals and amateurs, so I let my punches go and couldn’t stop. I knew the outcome would be a knockout for sure, but didn’t know how long it would take.