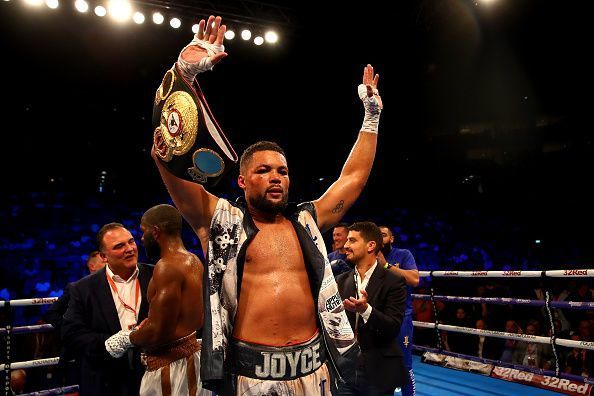 Joe Joyce ended a year out of the ring with a third-round TKO win over Michael Wallisch in the second professional boxing show in the UK since the coronavirus pandemic saw the sport shutdown in March.

Joyce floored Wallisch three times in a comfortable win at the BT Sport Studios in Stratford, in a behind-closed-doors event that was a warm-up, keep-busy fight ahead of Joyce’s clash against English unbeaten rival Daniel Dubois later this year.

Joyce (11-0, 10 KOs), from southwest London, is set to face Dubois at The O2 on Oct. 24, assuming a large enough crowd is permitted to make it economically viable and was relieved to box again for the first time in just over 12 months.

“I didn’t get a long training camp but it was a good step to get ready for Dubois,” Joyce said, who weighed in a career-heaviest 270 pounds.

“I’m a bit portly around the middle but it’s tough training in lockdown,” Joyce said.

But 2020 has been frustratingly slow for him after a costly training camp in Las Vegas in preparation to face Dubois in April, before it was pushed back, and then again to October.

Joyce can be happy with his attack against Wallisch, but he was caught too many times in the opening round that would have been welcome viewing for Dubois.

Dubois (14-0, 13 KOs), 22, from southeast London, will prepare for Joyce with a bout against Germany’s Erik Pfeifer on August 29, and is a concussive puncher.

Wallisch (20-4, 13 KOs), 34, from Munich, had lost his previous fight by third-round stoppage to France’s Tony Yoka, who beat Joyce in the 2016 Olympic super heavyweight final for gold medal. Matching Yoka’s effort will have pleased Joyce, but he began slowly and carelessly.

Wallisch was able to connect with a few overhand right hands in the first rounds, before Joyce got into his rhythm later in the opener.

Joyce’s style is relentless walk-forward pressure, and late in the second round Wallisch sunk to the canvas after an accumulation of a right to the body and the top of the head.

In the third round, Joyce twice floored Wallisch after sustained pressure. When Wallisch went down from a right hook to the head, followed by a sweeping left to the body, the fight was waved off.

Joyce was without US-based trainer Ismael Salas due to the travel restrictions caused by COVID-19.

“I would like to get back as soon as possible [to the US],” Joyce said, who hopes to join Salas in Las Vegas as soon as he can.

“If I can’t travel there, he will just have to come here [to the UK].”