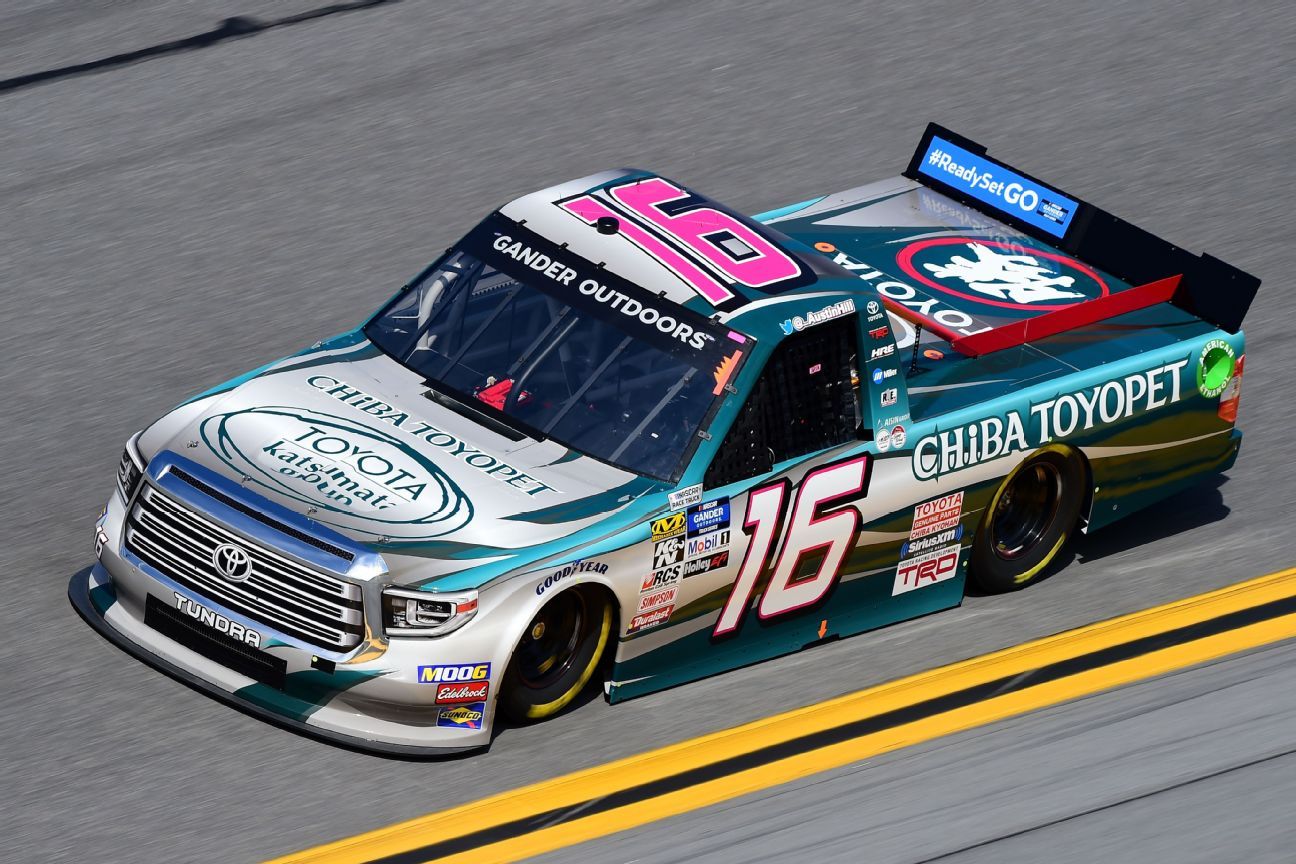 KANSAS CITY, Kan. — Austin Hill made all the right moves getting to the front in the NASCAR Truck Series race at Kansas Speedway on Friday night.

That included strategically hitting the brakes.

Hill was coming out of the pits in third after the final stop but wanted to have the outside lane, so he hit the brakes and let someone else get ahead of him. So what if Brett Moffitt bumped him from behind? Hill had the position he wanted — and the fastest truck by far — and he cruised away to win the opener of the first Truck Series doubleheader.

“We’ve been working so hard this season. We’ve been running really consistent,” said Hill, who had to eschew a customary victory burnout in favor of a slow roll to save his truck for Saturday. “We finished fourth last year and I told the guys, `Let’s finish three spots better,’ and I’ll be dang if we did it.”

Kraus was skipping his high school graduation in Wisconsin to run this weekend.

Hill had been in the top 10 in all but one race this season but had yet to reach victory lane — his best finish had been second at Pocono and Atlanta. But after winning Stage 2 at Kansas Speedway and briefly jockeying around the lead, Hill cruised away over the final 30 laps in his No. 16 Toyota for his fifth career Truck Series win.

“Those last 20 laps felt like forever,” he said. “I didn’t think I’d ever get the checkered flag. I was thinking, `If the caution comes out, do I choose the outside or inside lane? How hard do I have to drive it into the corners?’ I’m glad we didn’t have to do a green-white-checkered finish.”

It was 90 degrees at the green flag and the race ended just as the sun was setting behind the empty grandstands, which meant little relief for drivers. In fact, the sun made things even more challenging by casting parts of the track in shadow, creating some areas that were slick and others where there was plenty of grip.

The heat index approaching triple digits appeared to get to Natalie Decker, who walked unsteadily from her truck to the pit road wall and laid down after the race. She was checked there by medical personnel but appeared to be fine.

The heat will be brutal again Saturday with the green flag dropping at 12:30 p.m.

Moffitt, who won his first stage of the season last week at Texas, took the lead after a caution for a spin involving Robby Lyons and went on to win the opening stage Friday night. Hill hadn’t won a playoff point before taking Stage 2.

“We kept the truck in one piece,” Moffit said with an audible shrug, “so we get to run it again tomorrow.”

The start of the race was a disaster for Tyler Ankrum, who came into the night two spots ahead of the playoff cut-off line in eighth place. He had a tire going down and came to the pits, then had to make another stop when the problem persisted a moment later. He finally went to the garage area to have a brake problem fixed.

Defending race winner Ross Chastain, who is running primarily in the Xfinity Series, was up front when he had a right rear flat late in the race. Travis Pastrana will take Chastain’s place in the No. 40 for the Trucks race on Saturday.