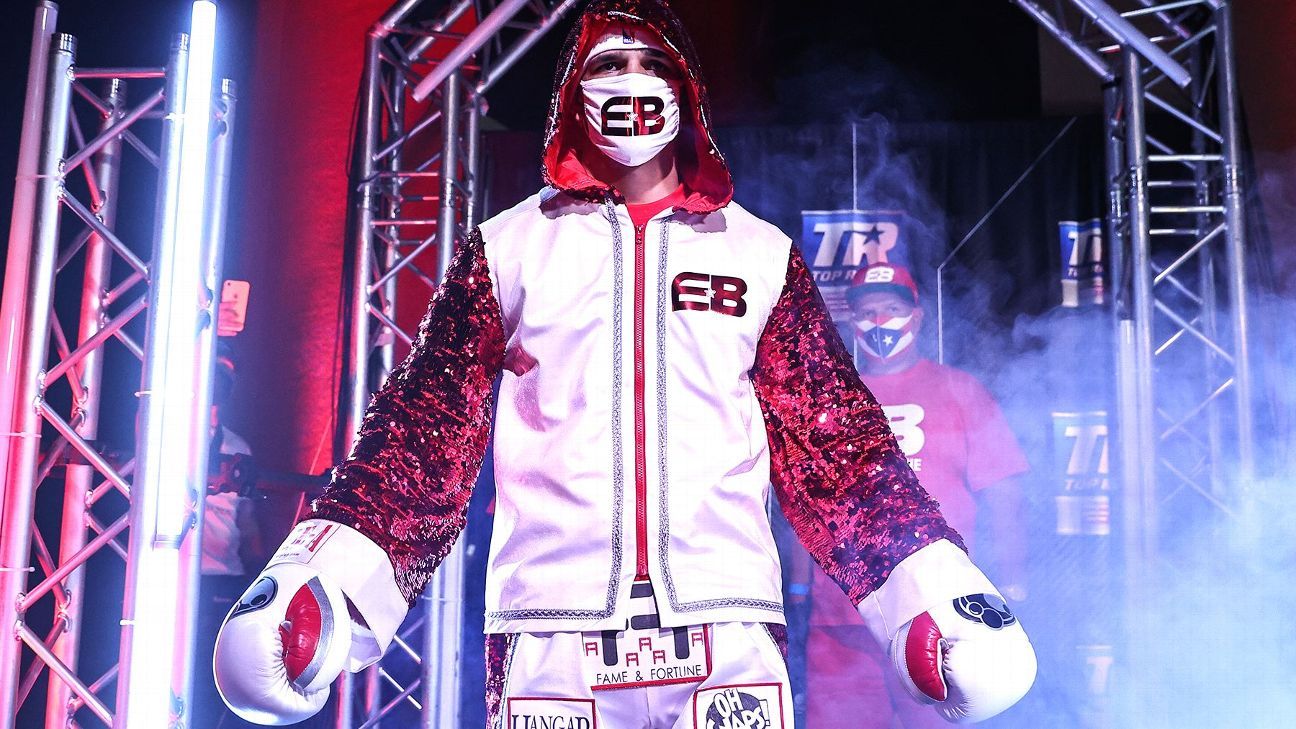 I have covered hundreds of boxing events in my life, but none quite like Tuesday’s Top Rank card at the MGM Grand Convention Center. I hadn’t seen a live fight since late February, when I went to Frisco, Texas, for the Mikey Garcia-Jessie Vargas card, and I was anxious to get back to it.

I left Los Angeles at 2:45 p.m. on Sunday and arrived in Las Vegas just after 7 p.m. After grabbing a quick bite to eat (I had missed the window in the Top Rank “bubble” for food), I arrived at the MGM Grand, and checked into the hotel.

Once I reached the 12th floor, it stopped being like any other event I’d ever attended.

At 9 p.m., I walked down the hall, prepared for a giant Q-tip to be stuck up my nose for the mandatory COVID-19 test. Instead, it was an oral test, and once the swab went down to my tonsils for a couple of seconds, that was it.

I was told to go back to my room for the next few hours, and that no news was good news. If I didn’t get a call, my test was negative.

There was no call, and I was officially inside “the bubble.”

Over the next two days, some parts of fight week felt familiar, but others were reminders of everything going into making this series of Top Rank shows, which have been going on since June 9, a reality.

Here’s what I learned during my bubble experience.

The 12th floor of the MGM Grand is where anyone who had anything to do with the fights — from the rooms to their camps — the Top Rank staff, the medical personnel and the testing station itself, were situated.

I received a wristband with a barcode, which was my pass to all of the other accessible areas. There was the convention center, where the ring and the television set were, as well as an area where you can get food. It was like eating at a school cafeteria. On Monday, the day of the weigh-in, I was able to enjoy a nice selection of food for both lunch and dinner. That was thanks to the necessity for the fighters, who had to be particularly well-fed after depleting the systems while cutting weight. The lunch on Monday featured chicken and salmon, while the dinner featured braised beef tenderloin. I thought it was pretty good.

The turkey sandwich they served on fight day for lunch wasn’t as great. It had more bread than meat, so I just ended up eating the turkey and having the side salad. The reality is that many of the eateries I’ve been accustomed to going to at the MGM Grand at previous fights were closed — and beyond that, if you were in the bubble, you had to eat in their dining area.

Life in the bubble

I adhered to the rules, and I never felt unsafe. It was really that simple. I made sure to do my best to not be too close to anyone for extended periods of time, and to always wear a mask in the designated areas. It felt like the measures put in place by Top Rank and the authorities in Nevada were more than sufficient, but it was up to each individual to adhere to the guidelines.

Fighters on the card had the strictest restrictions. To go from their hotel rooms to the MGM Grand Conference Center area, where all the fight activities were taking place, they had to take a service elevator and then a short van ride.

There were signs that could be clearly seen in the elevator area that forbid boxers and their crews from using the regular elevators to go downstairs. Several weeks ago, Josue Vargas’ father, who is also his head trainer, was removed from the bubble and his son’s corner after he violated this edict.

Non-fighters were allowed to use the hotel elevator and walk through the casino toward the swimming pool entrance and MGM Grand Garden Arena to get to the fight area. We were, of course, required to wear a mask at all times during that process. Each time you went in — or out — you had to scan your wristband at the welcome desk, where they took your temperature before you entered.

Two tests to enter the ring

Generally, when someone makes weight, the assumption is that the fight is a go — but not in the bubble. While I had to test only once, fighters were tested when they entered the bubble, and then a second time after the weigh-in. After a negative test upon arriving in the bubble, and a successful weight cut, Raphael Igbokwe had a positive result on his second test, and his bout versus Genc Pllana was wiped off the slate on Tuesday morning.

It was the second fight to drop off the card on the final night of Top Rank’s first stretch of shows since March. Kingsley Ibeh, who had fought twice previously inside the bubble, was scheduled to face heavyweight prospect Guido Vianello. But Ibeh tested positive in his first COVID-19 test ahead of Tuesday’s scheduled fight, and that bout was canceled.

The story of the first phase of bubble fights wasn’t just the fights that did occur, but the ones that didn’t. In addition to a handful of positive tests, which affected a list of fighters that included Jamel Herring and Mikaela Mayer (the latter eventually did get to fight), injuries and weight-cutting issues scuttled more than a fair share of bouts.

The atmosphere for these fights was highly unusual. They weren’t the first fights I’ve ever attended in a nontraditional venue, but, obviously, I’d never been in an atmosphere specifically designed around not having any spectators in attendance.

But in working on press row on fight night, I was quickly immersed in my responsibilities. There are stories to write, and whether there are 20,000 fans inside the building or none, the job itself does not change all that much. As long as the fights are competitive and entertaining, you get caught up in the action. I enjoyed the good fights, and I felt my interest waning during the mediocre ones.

In terms of speaking to the fighters, I had to do that from a further distance. When I crossed paths with fighters at the weigh-in or in the dining area, I did my best to make the interactions as short as possible with them until after they fought. There was no traditional news conference after the fight, and they weren’t brought over to press row, which on Tuesday night consisted of myself and one other writer. Instead, fighters — including Oscar Valdez and Edgar Berlanga — did postfight interviews via Zoom.

Oscar Valdez goes in-depth on what it was like fighting in the bubble as well as his relationship with trainer Eddy Reynoso.

From the vantage point of the boxers, I spoke to Valdez about fighting inside the bubble, and he said it was a “very awkward experience.” Valdez explained some of the quirks of making it to his fight, which included having to be escorted around by security everywhere he went, not having a wide selection of food to replenish his system after he stepped on the scales, not being able to feed off the emotions of a live audience and, most important of all, not having his father in his corner or his manager around during fight week.

Valdez felt uncomfortable all week but ultimately got the job done with a 10th-round TKO against Jayson Velez. The bottom line is that with a showdown with WBC champion Miguel Berchelt looming, Valdez thought he had no other choice than to go through with this assignment and set up the biggest fight of his career.

The fights, for the most part, made the atmosphere, as is the case under normal circumstances. But that doesn’t mean having a live audience for big fights isn’t vital. It absolutely is — for the electricity a large throng can create, and especially from a financial standpoint. I would never want that dynamic to disappear from boxing or any other sport for that matter. But for the time being, this is the new normal.