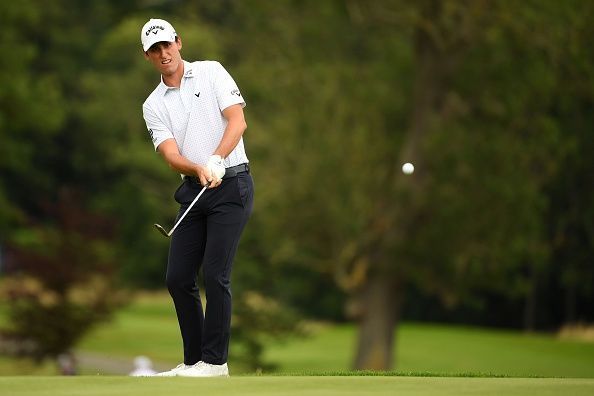 Italy’s Renato Paratore extended his bogey-free run to 56 holes to retain a one-shot advantage after the third round of the British Masters at Close House in Northumberland on Friday.

A closing birdie meant Paratore, who is seeking his first win since his maiden triumph at the 2017 Nordea Masters, carded an impressive five-under-par 66 to move up to 16-under overall.

“I played really solid these three days, especially the short game which has helped me save some shots when I needed them,” the 23-year-old Paratore said.

“I am just really happy. We practice to be in contention so I can’t wait to get out there tomorrow.”

South African Justin Harding was the nearest challenger on 15-under after also finishing the day with a 66, one clear of Dane Rasmus Hojgaard who matched the top-two by completing the round in five-under.

England’s Sam Horsfield jumped 41 places on the leaderboard to grab a share of fifth place with the day’s best score of 61, which included three eagles.

The 1.25 million euro event is the first of six tournaments to be staged in Britain without spectators amid strict protocols to combat the threat of COVID-19.

On his way to a stunning round of 63, England’s Jack Senior claimed the first hole-in-one of his European Tour career to win £50,000 for the tournament’s official charity — Sir Graham Wylie Foundation.

As part of European Tour’s #GolfforGood initiative, tournament sponsor Betfred will donate the amount, which will be used to fund projects helping people impacted by the pandemic.

The ace at the par three 14th hole helped the 32-year-old Senior surge up the leaderboard up to nine-under overall, seven strokes off the lead.

“My caddie and I talked about the wind, it came up a bit and that made it a comfortable seven iron for me,” said Senior.

“Obviously there was no crowd there to cheer it but I celebrated with my playing partner Guido Migliozzi and there were a few people down the green there who told me it went in, so it was a great feeling.”