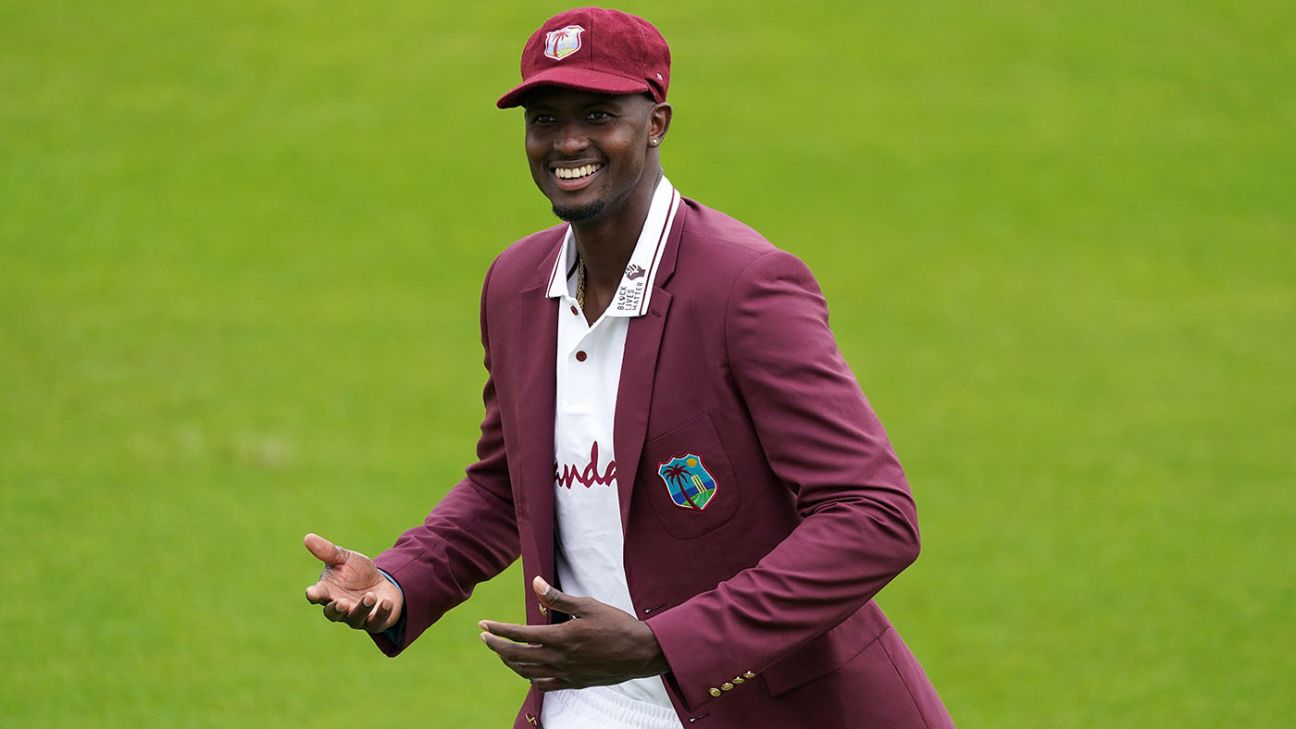 Kraigg Brathwaite has defended his captain Jason Holder’s decision to bowl first for the second match in a row, despite England putting themselves into a commanding position in the deciding Test in Manchester.

No team has ever won at Emirates Old Trafford after choosing to bowl first, and the team that batted first in the last four Tests at the ground went on to win. With that in mind, and after his call to bowl first last week backfired, it was a surprise that Holder again opted to field on Friday, not least with offspinner Rahkeem Cornwall included ahead of seamer Alzarri Joseph.

Holder said at the toss that there was “a little moisture in the surface” and that the overhead conditions had played a part in his decision. The wicket of Dom Sibley, trapped lbw by Kemar Roach, in the first over of the day seemed to vindicate his call, but with England closing on 258 for 4 thanks to a unbroken 136-run stand between Ollie Pope and Jos Buttler, there are valid questions for Holder to answer.

“It’s been a pretty even day,” said Brathwaite in a virtual press conference, defending Holder’s decision. “We had a plan to bowl first. There was moisture in the wicket, and we thought as a team we wanted to utilise it.

“They got a good partnership, but I don’t think we’re out of it, to be honest. Once we come out tomorrow and control the scoring rate, build that pressure, then I think we can get some wickets in the morning.”

With both Saturday and Monday’s play in doubt due to rain, West Indies may find themselves needing to bat well only once in order to save the game, but Brathwaite denied that the forecast had an influence in their plan to bowl first, and refuted the idea that Holder was playing it safe.

“I wouldn’t say that: we saw some moisture in the pitch,” he said. “Our plan was to get wickets early and put them under pressure. I wouldn’t say it was because of the weather as such.”

The inclusion of Cornwall in particular seemed to be at odds with the decision to bowl first. West Indies had relied on Roston Chase as their main spinner throughout the series, bowling tight lines and keeping things tight, but instead picked Cornwall, a more attacking bowler, but denied him the chance to bowl last on a wearing surface.

And while he took an excellent reaction catch in the slips and bowled some dangerous balls, Cornwall struggled to tie England down, leaking 3.38 runs per over. “He was unfortunate not to get a wicket, but I thought he had a decent start,” was Brathwaite’s unenthusiastic analysis.

Brathwaite suggested in particular that early wickets once play is able to resume would be crucial, with England leaving out Zak Crawley and changing the balance of their side in order to compensate for Ben Stokes’ quad muscle injury, which has left him playing as a specialist batsman.

That means Chris Woakes, who has averaged just 12.6 with the bat since his hundred against India at Lord’s in 2018, finds himself due to bat at No. 7, perhaps giving West Indies encouragement that one wicket could bring a flurry.

“Early wickets will be crucial with the new ball, the harder ball,” Brathwaite said. “But [even] if we don’t get early ones, if we stay in it, there’s one less specialist batsman – Woakes can still bat – but two or three wickets could happen.

“We’ve got to be very disciplined when we start out in the first session. The harder ball on the surface is always good [so] I think the new ball’s crucial for us. Once we build that pressure with some tight overs, we’ll get some wickets early.”