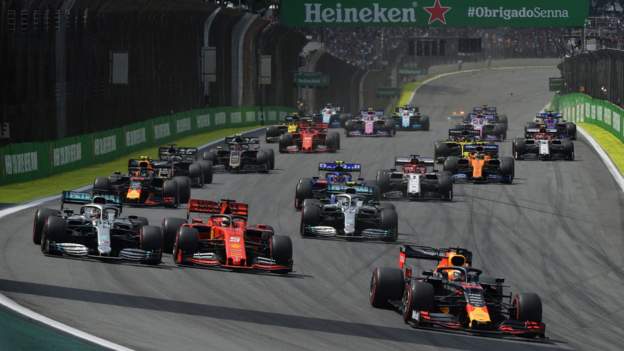 Formula 1 has abandoned hope of holding the US, Mexican and Brazilian Grands Prix this year as a result of the coronavirus situation in the Americas.

The three countries have among the worst infection rates in the world and F1 bosses therefore believe it would be irresponsible to hold races there.

Instead, three further races in Europe are to be added to the calendar.

These will see a return for Germany’s Nurburgring and Imola in Italy, and an F1 debut for Portugal’s Portimao track.

The US Grand Prix in Austin, Texas, had been due to be held on 23 October, with the Mexican race in Mexico City a week later and Brazil on 13 November.

But with infections soaring in all three countries, F1 officials have accepted that it will be impossible to hold the races.

Any hopes of reviving the Canadian race, originally scheduled for June and postponed in April, have also been abandoned.

The coronavirus has a much lower prevalence in Canada, but the country has local restrictions and travel rules that make impossible to hold a race.

The grand prix at the Nurburgring, which last hosted a race in 2013, is expected to be held on 11 October, when it will be vulnerable to bad weather.

The date is the latest in the year a grand prix has ever been held on the historic track in the Eifel mountains, where snow has been known to fall even in the summer, and certainly cannot be ruled out in October.

Portimao, on the Algarve, would follow on 25 October, with Imola on 1 November.

Imola has long, historic connections with F1. It replaced Monza as the home of the Italian Grand Prix in 1980 and had a permanent home on the calendar as the San Marino Grand Prix from 1981 to 2006.

It is also notorious as the track on which Ayrton Senna and Roland Ratzenberger were killed on consecutive days in 1994.

F1 still does not have a full calendar, but remains hopeful of being able to have at least 16 races this year.

The additional three races at the Nurburgring, Portimao and Imola will take the calendar to 13, and the season is expected to conclude with two races in Bahrain and one in Abu Dhabi in November and December.

In addition, F1 is working on holding one or two races in Asia in early to mid-November.

The new street circuit in the Vietnamese capital Hanoi, which had been due to make its debut as an F1 venue in April, is almost certain to hold a race, and there is a possibility of a return to Malaysia’s Sepang track, which held a grand prix from 1999-2017.