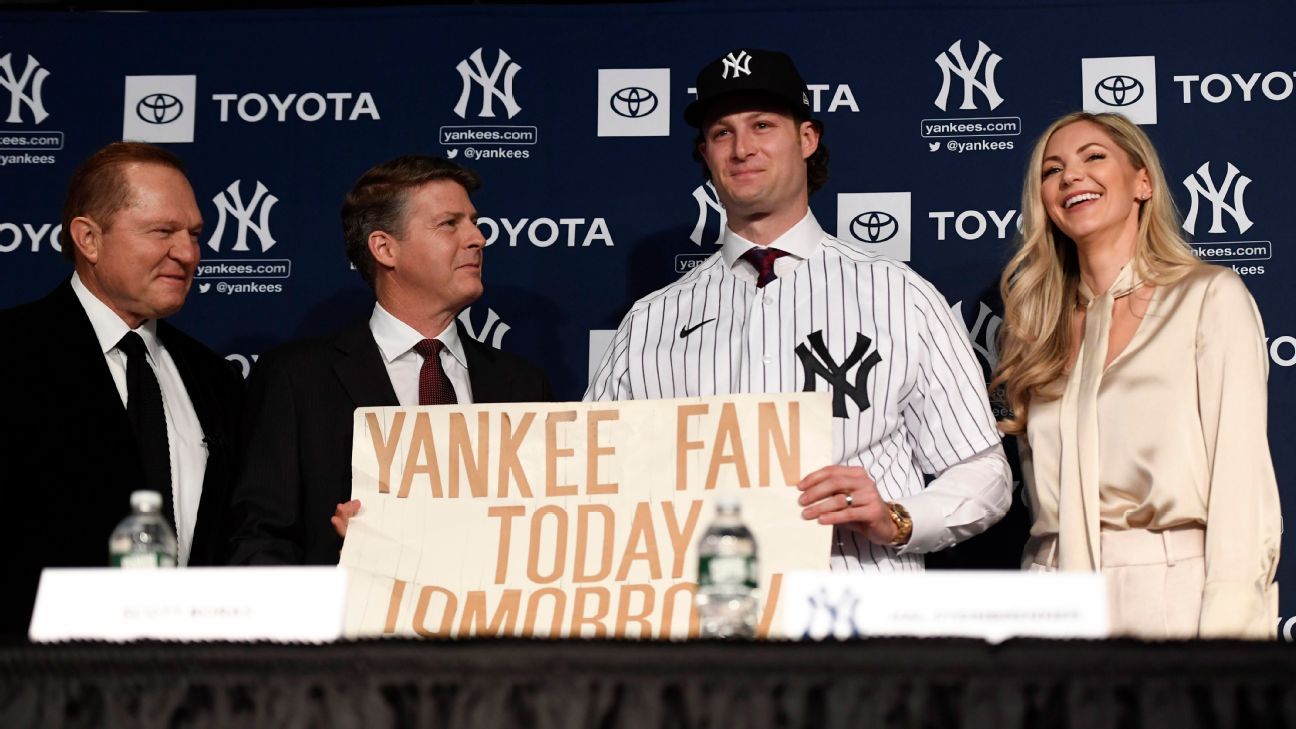 NEW YORK — A week before Christmas last year, the New York Yankees held a news conference in the posh Legends Club at Yankee Stadium to introduce Gerrit Cole after signing him to a $324 million deal, the richest contract for a pitcher in Major League Baseball history.

This time around, the Yankees were not going to lose Cole, as they did when he chose to go to UCLA after they picked him 28th overall in 2008. And they would not lose him by having to sit by and watch him get drafted No. 1 overall by the Pirates, as they couldn’t avoid in 2011. And certainly, the Astros would not get by the Bombers this time around, as they had in trading for two seasons of his services in a deal with Pittsburgh in 2018.

That particular Wednesday morning before he signed, former Yankees captain Willie Randolph was out running errands. The holidays were close, and so were his grandchildren. He set his DVR for 11 a.m., the time scheduled for the Yankees presser to introduce none other than their free-agent “white whale.” The pitcher that general manager Brian Cashman had tried to sign out of Orange Lutheran High School was finally going to be wearing pinstripes. And all of a sudden, Randolph’s phone started blowing up, with dozens of text messages pouring in.

“‘Did you hear what Gerrit Cole said?’ and I’m like, ‘What are you talking about? I’ve never really met the guy, what did he say?'” Randolph told ESPN. “Why would he mention my name? That was really the first thing on my mind; I was really shocked.”

Randolph rushed home, and alongside his wife, they grappled with the DVR. That’s when it all became clear: Randolph had gotten a shoutout from the Yankees’ new ace. And in that one moment, the relationship between one family of Yankees fans and the players they rooted for added up to one great new addition certain to make history for baseball’s most historic franchise.

Cole’s father, Mark, is originally from Syracuse, spent part of his childhood in upstate New York and grew up a Willie Randolph fan in the 1970s. His father’s fandom is why Gerrit grew up rooting for the Bronx Bombers and why he always believed that one day he would wear pinstripes.

“My wife and I were looking at it and I was like, ‘Isn’t that cool, man?’ It made my day,” Randolph said. “He was talking about his dad being one of the biggest Yankee fans growing up in New York, and he said his favorite players were Willie Randolph and Mickey Rivers. I got a big kick out of it. I did not know his dad was from the area. To hear that was a cool moment for me. My family got a kick out of it. ‘Dad, did you hear what Gerrit Cole said?’ My son called me going, ‘That’s really cool.’

“I swelled up with pride,” Randolph added. “We had guys like Thurman Munson and Reggie Jackson and Chris Chambliss, all these great players, and I was like the unsung hero guy. For someone to say, ‘Willie Randolph was one of my favorite players,’ I really cherish my fans, and the fact that we’re connected now in some way to his son is really kind of cool.”

Cole was born in Newport Beach, California, on Sept. 18, 1990. He grew up in Southern California and has told stories of rushing home from school to catch Yankees games, which would play in the late afternoon because of the time difference. The Coles would eventually attend Games 6 and 7 of the 2001 World Series together, when 11-year-old Gerrit held that now-famous faded pinstriped sign that read: YANKEE FAN TODAY TOMORROW FOREVER. 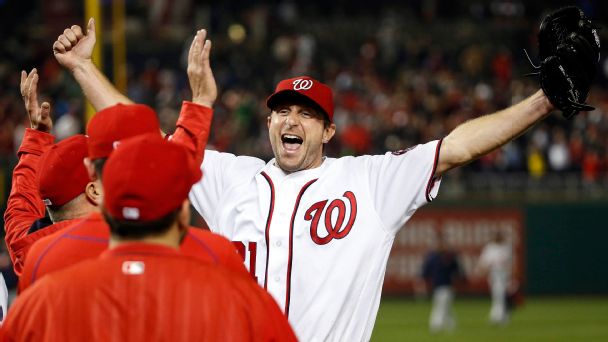 Baseball’s back! You can watch the start of 2020’s 60-game sprint beginning with a Yankees-Nats matchup Thursday night and continuing through the weekend.

On ESPN and the ESPN App; all times ET.

And so Cole lived and grew up during one of the most successful eras enjoyed by Yankees fans of any age. And just as his father had grown up rooting for Randolph because of his hustle and grit, Cole’s favorite player was a fellow pitcher who also was known for being a low-key Yankees star: Andy Pettitte.

Along with Hall of Famers Derek Jeter and Mariano Rivera and catcher Jorge Posada, Pettitte was a member of the “Core Four,” the quartet of players who sustained a Yankees dynasty, winning four World Series championships in five years. Returning to the Yankees in ’07 after a spin with the Astros, the veteran lefty added one more ring as a Yankee to his résumé in 2009 — the most recent of the team’s 27 titles.

That history and one fan’s respect for his childhood hero added up to a big reason the Yankees asked Pettitte to help them recruit last winter’s most coveted free agent, bringing him along to one of the five meetings they had with Cole while pursuing one of baseball’s best pitchers.

“The Yankees asked me to come. Booney [manager Aaron Boone] told me that Cole was a fan of mine,” Pettitte told ESPN. “I was just there to give him a player’s perspective on being in New York. I am glad I was able to help.”

Help he did, but without knowing just how much because of what he had to say. Pettitte told Cole the most important thing he wanted to hear: He could be himself in New York.

From a battle of Big Apple aces to a showdown of superstar shortstops and beyond, here are Buster Olney’s top-10 rankings for each position ahead of the 2020 MLB season. Olney’s rankings

Appealing to Cole’s competitive nature, Pettitte talked in detail about playing and pitching on a stage like New York, about what it meant to wear pinstripes, and why Cole would be the crown jewel on a team fundamentally built around gifted position players with pop in their bats and backed by bullpen firepower.

“Andy gave me a really good perspective on how he made New York work for him. He was really good at articulating how you can be comfortable,” Cole said. “You can live outside the city; you can live in the city. He gave me a player’s perspective of like, ‘Hey, New York and all this stuff isn’t meant for me, but I made it work for my family and I ended up loving it.'”

Pettitte, as is his nature, takes no credit. Neither does Randolph. The signing of Cole was simply destiny.

Randolph, who joined Pettitte as a guest instructor for the Yankees at the original start of spring training back in February, finally had a chance to speak with the righty then. Not surprisingly, he felt a connection.

Cole told Randolph, “I’m an extension of my dad, in a way. I’ve got to share this.” Said Randolph, “You could see it, it was almost like he was there, watching me play, because he probably heard his dad talk about it. We talked about how much [his dad] liked my game, the way I played. He told me, ‘My dad might come down at the end of spring. If not, I’m sure you’ll meet him in New York.’ And I said, ‘I can’t wait to meet him. I’m going to have a ball or a bat, I’m going to sign for him and present it to him and we could just talk about old times.'”

The Yankees became the talk of the offseason by signing Gerrit Cole to a record nine-year, $324 million deal.

The history of big-money ace deals

What’s next for Yankees (ESPN+)

Mark Cole saw Randolph’s 1977 Yankees team snap a 15-year championship drought. Fifteen years — an eternity for Yankees fans. His son saw Pettitte win with some equally legendary teams, including the 1998 Yankees, who won a record-setting 125 games (including postseason) en route to the title. Pettitte won all three series-clinching games in their 2009 title run that represents the franchise’s most recent championship — one that also snapped a nine-year drought.

Managing general partner Hal Steinbrenner opened the team’s checkbook for Cole in large part because not having won a title in more than a decade is not acceptable, not in New York, not for the Yankees. And if the “Evil Empire” does capture the MLB crown a record 28th time in this unique big league season, Yankees haters are welcome to pin it on former stars like Pettitte and Randolph.

“You would never think a Yankee fan’s son would end up being a Yankee, one of the best pitchers in the game, and then it turns out that you are one of his dad’s favorite players,” Randolph said. “It’s a storybook kind of thing when you think about it. So that’s OK. Blame it on me.”