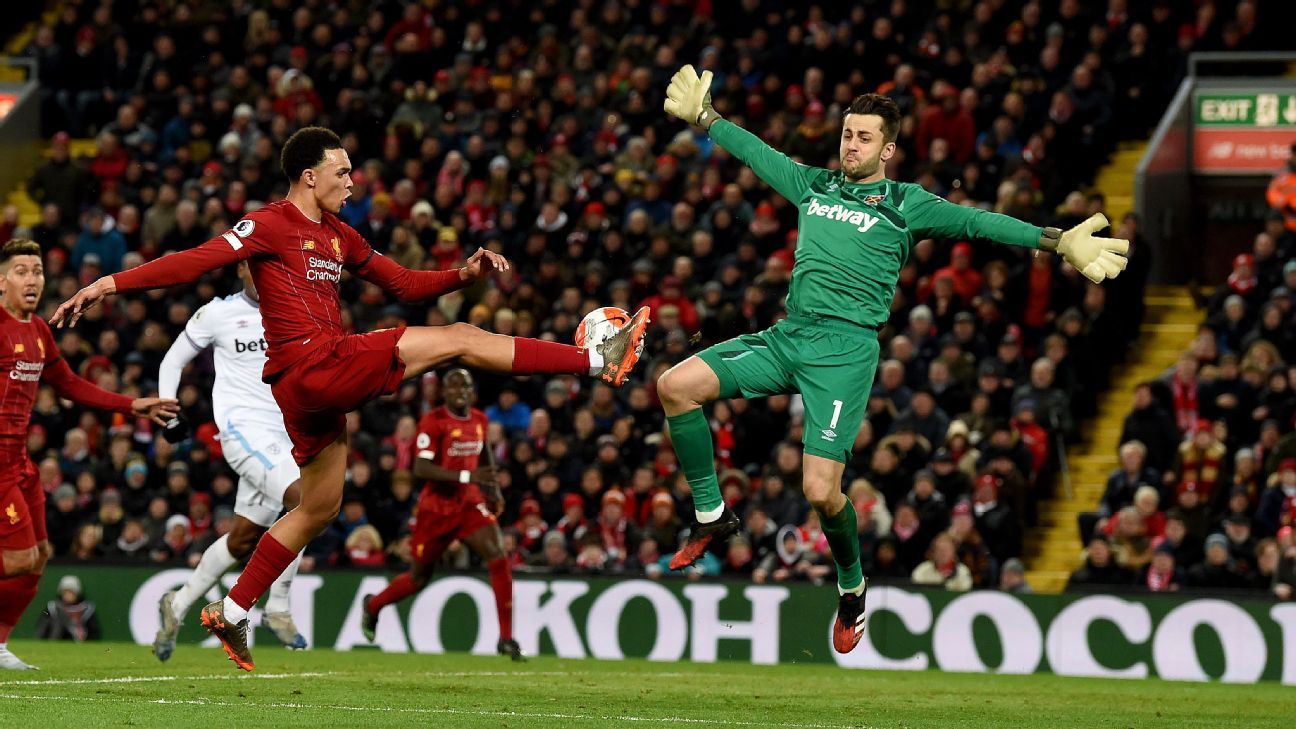 The FWA Footballer of the Year award will be handed out Friday to the player deemed the best by the Football Writers’ Association, a collection of journalists and correspondents who cover the game in England.

Similar to the Ballon d’Or in that it’s voted on by writers — compared to the PFA Player of the Year, voted on by the players themselves — it is the oldest and most storied prize given out in British football every year. According to one of the founders of the prize, Charles Buchan, it goes “to the professional player who by precept and example is considered by a ballot of members to be the footballer of the year” both on and off the pitch.

With Liverpool finally crowned as Premier League champions after Wednesday’s 5-3 win over Chelsea at Anfield, receiving their trophy, who will win the first MVP prize to be handed out this season? ESPN’s experts make their case for who should win.

It’s never easy for defenders to win individual awards, a reality borne out by the fact that no defender has been voted as the Footballer of the Year in England since Liverpool full-back Steve Nicol in 1989. But during Liverpool’s record-breaking title-winning season, it is hard to argue that any of Jurgen Klopp’s players has made a greater impact, and been more irreplaceable, than Alexander-Arnold.

The 21-year-old is second only to Manchester City’s Kevin De Bruyne in the assists table — he has created 13 goals from the right-back position — and he has figured in every league game so far for the champions. But the stats only tell you part of the story.

Alexander-Arnold, in tandem with left-back Andy Robertson, has been as crucial to Liverpool’s title win as Alisson Becker, Virgil van Dijk or any of the front three of Sadio Mane, Roberto Firmino and Mohamed Salah. By offering such a potent attacking threat, Alexander-Arnold allows Liverpool to break the defensive lines of opponents from deep inside their own half with his ability to burst down the flank or deliver a long pass to the forwards.

Without Alexander-Arnold, Liverpool would be a far less potent attacking force, but his athleticism and pace also give him the edge on opponents when defending.

He is the prototype full-back of the modern era and a model of absolute consistency and, with the award also placing an emphasis on the “precept and example” of the vote winner, Alexander-Arnold’s professional conduct on and off the pitch also plays in his favour. — Mark Ogden

When Manchester City played Chelsea last month, there was one thing striking about Pep Guardiola’s attitude during the game. In the absence of fans in the stadium, you could obviously hear everything the Catalan was telling his players.

One thing was constant throughout the whole game: every time a City player had the ball, Guardiola was shouting “Kevin! Kevin!” Regardless of who was in possession and who was free to receive the ball, it was all about Kevin.

Everything City have done well this season has been through him. He’s currently on 19 assists for the Premier League season, and will have the chance Sunday against Norwich to beat Thierry Henry’s record of 20 set in 2003. Considering De Bruyne has been playing a bit deeper than usual this season to improve the balance of City’s midfield, it is an even more incredible feat. Had City’s finishing been better, he could probably have had more — De Bruyne created 32 big chances this season, 14 more than Riyad Mahrez, who is second in the rankings. He has also had 11 more through balls than the player in second, James Maddison (30 to 19).

If you add up the 11 goals he’s also scored so far, it means that in total, he has been involved in around a third of his team’s goals this season and is putting up the best numbers of his career. After five seasons in the Premier League in which he has been consistently amazing, he deserves to win his first Player of the Year award considering this might well be his best yet. — Julien Laurens

Henderson isn’t the best player in the Premier League this season. He probably hasn’t even been the best player at Liverpool, with Sadio Mane and Virgil van Dijk making more of an impact in pure football terms.

A personal view is that, generally speaking, the player who makes the biggest difference in the team who wins the title should win this vote, but even that starting point rules out the player I’ve enjoyed watching more than any other: De Bruyne. But the Football Writers’ Association award has always aspired to more than merely recognising great goal scorers or diligent defenders.

Charles Buchan, one of the founding fathers of the FWA award, suggested it should be given to the player who by “precept and example” stands above the rest. That guidance takes on unprecedented meaning due to the coronavirus pandemic. Footballers were thrown into the limelight in March when health secretary Matt Hancock suggested they should take a pay cut.

Many were already helping club-related charities or the NHS more directly, but Henderson created Players Together to unify that work, raising what one source close to the initiative described this week as “several millions of pounds” to help tackle COVID-19.

Manchester United‘s Marcus Rashford instigated a remarkable government U-turn on free school meals, and after a fine individual season at Old Trafford, the 22-year-old would be a serious contender. But combining his off-field work with impressive on-field performances, Henderson has set the standards every day at Anfield, driving Liverpool on to achieve the remorseless consistency which delivered their first League title in 30 years. He would be a worthy winner.

The global pandemic calls for a unique interpretation of the criteria, and the midfielder has helped tackle the perception of football in wider society, organise a remarkable united fundraising effort and captained Liverpool throughout their stunning season. He is often-maligned, but history will judge Henderson well and so should we. — James Olley

In a season that had no outstanding individual, where the one team that won it by a country mile is truly that — a team — why not reward belief, resilience and persistence? And no, he’s not a charity case.

Ings has scored more Premier League goals from open play than anybody else, and he has done it for a team in the bottom half of the table. One that doesn’t have De Bruyne or Bobby Firmino creating chances, but where the leading assist men are Nathan Redmond, Stuart Armstrong and, yes, Jack Stephens.

Rewarding Ings also means rewarding a guy who played Sunday League football until he was 15 because no proper club would sign him. A guy who played as many minutes of Premier League football between May 2016 and December 2017 as the Dalai Lama. A guy who scores goals for a living but did not score a single Premier League goal for two-and-a-half seasons.

I know I shouldn’t campaign against the other guys, but come on now.

Take away Ings, who scored nearly half of Southampton’s goals, and the Saints are playing against Wycombe next year. Take any Liverpool guy or City guy of your choosing out of their teams and not much changes.

Don’t give me Pierre-Emerick Aubameyang: he scored fewer goals and his team will finish two spots above the Saints with a far higher wage bill. Marcus Rashford? Great guy, but his job is scoring goals and, from open play, he’s got half as many as Ings.

Be bold. Be Ings. — Gab Marcotti

What Rashford has done this season is bigger than football. The Manchester United forward, still only 22, took the time to learn the intricacies of government policy and put together a plan of action to force prime minister Boris Johnson into a U-turn that will directly benefit thousands of children across the UK. It’s hard to argue that isn’t more important than topping the goal scoring chart or winning a trophy.

Here are the top 100 players and managers in men’s soccer, as rated by our experts.

On the pitch, Rashford has taken a giant step forward, passing 20 goals in all competitions for the first time in his career — impressive for a player who has spent most of the season on the wing. His contribution should earn Ole Gunnar Solskjaer’s team a return to the Champions League, but it’s away from football that his contribution will be felt most.

By using his platform and knowledge of a situation he found himself in as a youngster, Rashford was able to ensure vulnerable children will continue to have access to free meals through the school holidays. For a footballer to put his head above the parapet to make a real change to society is worthy of recognition from the Football Writers’ Association. –– Rob Dawson.

Mane does not like the limelight. When he won the African Player of the Year award in January, he responded by saying: “To be honest, I’d rather be playing football than talking to so many people.” He’s selfless, and that’s how he plays his football.

The marauding winger is lethal and ruthless but all smiles on the outside — Jurgen Klopp’s manifestation on the field — and has been indispensable in Liverpool’s charge to their first title in 30 years. His versatility means he has fulfilled many roles in attack since joining Liverpool in June 2016 from Southampton, as Klopp’s first marquee signing after taking the job, and he has stuck close to his boss ever since, playing any role demanded.

Now he has found a home on the left wing, he has produced the goods when his team needed him most — like the winner against Norwich at Carrow Road back in February, and then against Bournemouth in March. As the pressure of leading the chasing pack started to show, Mane stood up and delivered.

The best example of Mane combining selflessness and ruthlessness came against Aston Villa in November. The league wasn’t yet sewn up; Liverpool were 1-0 down in the 87th minute before Mane teed up Andrew Robertson’s equalising header with a delightful pinpoint cross, and then deftly nodded the winner himself three minutes later. Those are the moments which win titles and his 17 goals and seven assists show how indispensable he has become.

Above all that, he was Lionel Messi‘s pick for the 2019 Ballon d’Or in December. “It’s a shame to see Mane finish in fourth place,” said Messi after landing the award himself. “I chose him because he’s a player that I like. Mane achieved a great year and was exceptional for the Liverpool team. That’s why I chose him.”

It’s hard to argue with that. — Tom Hamilton