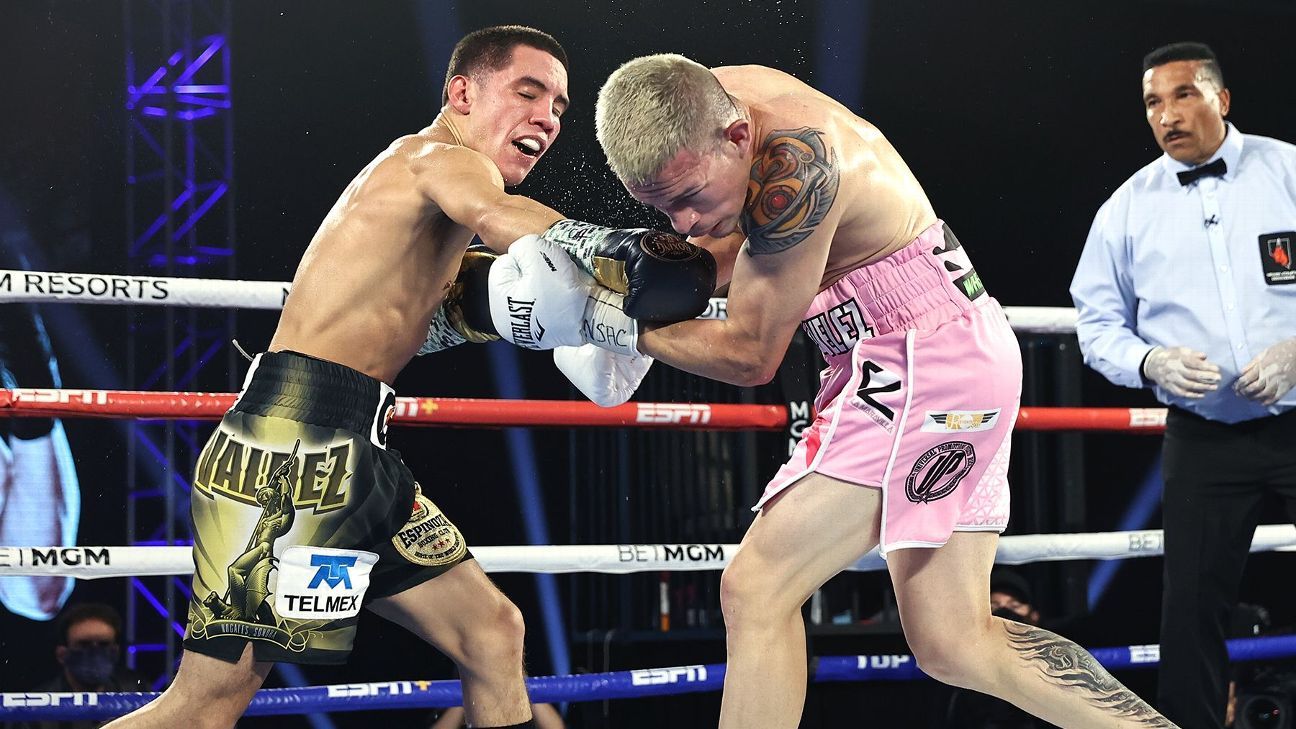 It was Valdez’s first time in the ring since November, when he defeated late replacement opponent Adam Lopez by seventh-round TKO.

It wasn’t easy for Valdez who oftentimes had issues with the aggression of Velez, but Valdez’s superior power took over down the stretch.

Velez (29-7-1, 21 KOs) put Valdez on the defensive early on, but Valdez (28-0, 22 KOs) eventually settled in and began to chip away. A left hook sent Velez to the canvas at the end of the fifth round, and then in the ninth a series of power punches buzzed Velez.

In the 10th, Valdez made the decision to pour it on and not play it safe. After shaking Velez with a left hook, that same punch later on knocked down Velez once again. Velez got up, and was then swarmed with another series of punches from Valdez, and as he stumbled into the ropes, the fight was waved off at 2:23 by referee Tony Weeks.

Up next for Valdez is supposed to be a showdown against WBC junior lightweight titleholder Miguel Berchelt.

And the bigger question … is Eddy Reynoso the right trainer for him. This is no knock on the highly accomplished Reynoso, who works with middleweight champion Canelo Alvarez and lightweight sensation Ryan Garcia. Reynoso is an excellent trainer but he just may not be the right one for Valdez. After four fights together, the light still hasn’t come on for Valdez under his guidance.

In short, Valdez at his best is an attacking fighter who initiates contact. He’s not a fighter that is really comfortable or adept at getting on his back foot and trying to counter punch. That’s simply not who he is. Valdez is the type of fighter whose offense is his best defense. Regardless of the techniques being taught to him, they should always be implemented in aggressive fashion.

He simply isn’t Canelo, who has mastered the art of slipping, rolling and counter punching.

His best moments against Velez came as he was taking the lead and creating his openings instead of waiting for them. To be fair, Velez is an extremely durable fighter who’s never been stopped in the previous 36 fights, and in his last bout took Jaime Arbodela to the limit, losing a contested split decision. Velez is still a very serviceable guy, and he put forth his trademark effort.

But looking ahead to the future, if Valdez wants to have any legitimate shot at defeating Berchelt, he has to be himself.

Super middleweight hopeful Edgar Berlanga added to his impressive streak of first-round knockouts by stopping Eric Moon at 1:02 of the opening stanza. For Berlanga, it’s the 14th consecutive first-round victory to begin his career.

Moon (11-3, 6 KOs) started the fight by rushing out at Berlanga (14-0, 14 KOs), trying to get him on his heels. But after that initial burst, Berlanga settled in and began to stalk Moon. As he got him into the neutral corner, Berlanga connected a booming overhand right that had Moon crumbling to the canvas — and just like that, it was over. Referee Kenny Bayless really had no choice but to wave things off when he did. It took Moon a few minutes to gather himself before he rose to his feet.

“It was another step-up fight for me,” Berlanga said afterward. “We prepared to go rounds, but I got him hurt and got him out of there.

“I still have so much room to grow as a fighter. The power is there, but I will show everyone that I am a well-rounded fighter. The knockout streak is cool, but there is more to me than first-round knockouts.”

Takeaway: What was thought to be a bit of a test — or at least an opportunity to get to the second round — instead became another exhibition of the raw power of super middleweight Berlanga.

In 14 professional fights, he has 14 first-round knockouts.

It’s natural to be skeptical of a sparking record because it could absolutely be a byproduct of soft matchmaking. But although Berlanga hasn’t faced any monsters, he has faced a litany of foes who have generally been very durable.

Yet against Berlanga, they last less than three minutes.

Perhaps it was because of the crowd-less setting, but to hear Berlanga’s punches up close was something else. They seemed to reverberate off the walls inside “the Bubble.” They sound and look different than those of most other boxers.

Some say that punchers are born, not made. Well, Berlanga is a natural-born puncher.

Junior flyweight Kim Clavel defeated Natalie Gonzalez by unanimous decision in a fast-paced bout. After eight rounds, the scores were identical from all three judges: 80-72.

There were many good exchanges between the two, but Clavel always seemed to be a bit faster and a half-step quicker. Neither Clavel (12-0, 2 KOs) nor Gonzalez (6-1, 1 KO) was ever truly hurt, but it wasn’t for lack of trying, as they threw a multitude of punches at each other throughout the fight. Clavel landed 131 of 522 total punches, and Gonzalez connected on 58 of 348.

“I knew it would be a hard fight because she’s a good fighter,” Clavel said. “[Gonzalez] had a good amateur background. This was my first time here. I had some pressure, but with every round, I felt better and better in the ring with my coach. We won all the rounds. This is what we wanted.”

Although the scorecards were wide, they didn’t necessarily reflect how competitive many of the rounds were.

“I felt good in the ring. Of course, it was unique, but I didn’t feel different,” Clavel said. “The preparation for this fight went well. I felt the pressure on me because it was a big stage. It was my first time here in Las Vegas. What a great experience.”

Clavel, who won the 2020 ESPYS Pat Tillman Award for Service for her work as an overnight nurse at retirement and elderly care centers during the coronavirus pandemic, putting her boxing career on hold, said she would like to return sooner than later.

“I would love to stay active and fight again before the end of 2020,” she said. “I want to be the best in the light flyweight division.”

Junior welterweight prospect Elvis Rodriguez scored an eye-opening, second-round TKO over Dennis Okoth to stay unbeaten. What was thought to be a big test for “The Dominican Kid” was instead a highlight-reel knockout. With a short, straight, left hand, Rodriguez sent Okoth to the canvas to end the fight.

Okoth (4-4-1, 2 KOs) had a well-earned reputation as a tough opponent who had taken on other prospects, giving them a tough time. But after a relatively uneventful first round, a single left hand had him down and out. It took a few minutes for him to get on the stool, to his feet and out of the ring.

Rodriguez, 24, (8-0-1, 8 KOs), who scored a first-round stoppage of Danny Murray on July 2, is building momentum for himself as one of the sport’s top prospects.

Takeaway: No list of the best prospects in the sport of boxing is complete without Elvis Rodriguez. Once again, Rodriguez showed that by the previously durable Dennis Okoth, who has taken on myriad young fighters (he has victories over fighters that were 10-0 and 10-1) and has never been dominated like that.

Rodriguez has been a bit of a secret within the Top Rank stable, but after Tuesday, I’d say the secret is out. This is absolutely a guy to keep tabs on at 140 over the next few years. He’s tall and rangy with boxing skills and legitimate power in both hands.

Rodriguez, who trains with Hall of Fame trainer Freddie Roach, could be back on the Jose Ramirez-Viktor Postol undercard on Aug. 29.

Dogboe stops Avalos in final round

Former WBO junior featherweight titlist Isaac Dogboe got back on the winning track by stopping Chris Avalos in the final round of their scheduled eight-round contest.

Dogboe (21-2, 14 KOs) was in complete control from the start, landing body shots followed by hard right hands over the top. Avalos (27-8, 20 KOs) was hurt consistently throughout this bout, both to the body and to the head. To his credit, Avalos tried his best to stave off Dogboe, but he simply didn’t have the firepower.

After a hard right hand struck Avalos in the eighth round, referee Russell Mora waved off the fight at 2:25. It was Dogboe’s first victory in nearly two years. After winning the junior featherweight belt in 2018 with an 11th-round KO victory over Jessie Magdaleno, Dogboe lost two consecutive bouts to Emanuel Navarette.

“I was off for 14 months,” Dogboe said after the fight. “This was a long time coming. I felt great with my new trainer, Barry Hunter. We’re only getting warmed up.

“Avalos took a great shot. I broke him down, and to get a knockout in my first fight back, I am tremendously content. I wanted to show everyone that Isaac Dogboe never went away. I’m still here, and I am only getting better.”

Takeaway: Dogboe got a much-needed victory against Avalos, and for much of the night, he was in complete control. But in all honestly, he faced a guy in Avalos whose best days are behind him. Avalos is 1-5 in his past six fights.

Dogboe didn’t look like a shot fighter, but you wonder how much of that had to do with what was in front of him. It was a good start for Dogboe with new trainer Barry Hunter, but it is hard to see the 5-foot-4 Dogboe, a former junior featherweight titlist, as an effective featherweight.

After the fight, Hunter expressed that he would like to see Dogboe back down at 122.